31 March 2020: The author of Warhol: A Life as Art will be hosting a Blackwell's Social Media event on Wednesday 1 April 2020. Details here.

The Tate Modern has closed

17 March 2020: The Tate Modern, which is currently hosting the Andy Warhol exhibition, is closing tonight (Tuesday) due to the Covid-19 virus. If you have tickets to upcoming events they will be in touch. Although they say at the top of their notice that "we are closing... from this evening, 17 March until 1 May," they say at the bottom of the same notice, "We don't know yet when our galleries will reopen...." 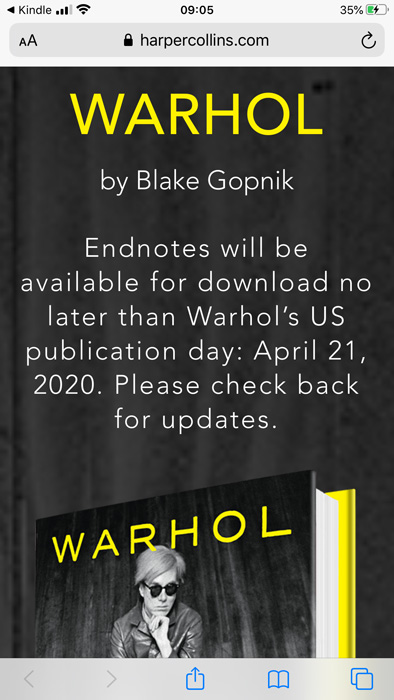 16 March 2020: In Blake Gopnik's new biography of Andy Warhol, the publisher, HarperCollins, has replaced the request for a password (see story below) with a notice saying that the endnotes will be available by the publication of the U.S version of the book. This still means, presumably, that the UK Kindle version will not have clickable endnotes whereas the American Kindle version will.

In regard to the website, what happens if the book goes out of print? Does that mean the notes will disappear or is the publisher guaranteeing that the website will be up ad infinitum? As far as I am aware, this is the first time that a section of a book has been published as a website. Websites change over time and sometimes they disappear altogether.

The notes are particularly important for this book because the source of the information is not always mentioned as part of the text. For example, Chapter 25 begins with the quote, "Love with Andy Warhol have been beautiful if Andy had wanted to share my experiment & see me, but all he wanted was to give me meals and have me meet his glamorous friends[.]" Because the person who said the quote is not named in the text, someone reading the UK book or Kindle version, as currently published, would have no idea who said the words that are quoted. That information is in the missing notes.

11 March 2020: Blake Gopnik's biography of Andy Warhol, Warhol, A Life as Art, was released last week in the U.K. Buyers may have noticed that both the book version and the Kindle version have been published without footnotes or endnotes.

There is a page in the book which directs the reader to a website containing the endnotes:

But when you click on that link, you currently get this:

The lack of endnotes is particularly noticeable in instances when there is an unnamed quote and no way to check the source of it. I am told that the website with the endnotes will eventually become active and that the U.S. Kindle version will have clickable endnotes, but the UK version will not.

Question for the publisher and Amazon UK: Why should Brits get a different version of the Kindle book than the Americans?

Accuracy is a major problem in Warhol biographies. At the moment, most buyers can't check the sources for much of the information in the book because they don't have access to the sources in the endnotes.

8 March 2020: As time passes it's easy to forget about the historical importance of venues and people from the 1960s who were part of the New York avant-garde. Venues like the Caffe Cino and counter-culture newspapers like the Village Voice (which included both Jill Johnston and Jonas Mekas as columnists) were an important part of the underground which gave birth to new forms of theatre, dance and, ultimately, art.

Another important figure was the theatre critic and arts editor of the Village Voice, Michael Smith. For most of the '60s he lived in Greenwich Village with Johnny Dodd, the waiter at the Caffè Cino who became a leading lighting designer for experimental dance and theatre. Johnny appeared in a number of Warhol films, including Warhol's Haircut and Kiss films.

Active as a director and playwright, Michael directed Warhol superstar Ondine, a friend, as Scrooge in Søren Agenoux's "Christmas Carol" at the Cino and in leading roles in Smith's own "Captain Jack's Revenge" at La Mama and "Prussian Suite" at Theatre Genesis.

In the 1970s Michael left New York, married, and had two sons, Julian (named for Julian Beck of the Living Theatre) and Alfred (named for Alfred Brooks of the Changing Scene in Denver). He wrote for several other newspapers and founded a theatre company, Genesis West, in Santa Barbara, California, producing and directing plays by himself and other contemporary writers. In 2003 he moved to a small farm in the Willamette Valley of Oregon. Since then his publishing imprint Fast Books has published 30 titles by himself and authors including Warhol's scriptwriter, Ronald Tavel, Judith Malina, Robert Heide (author of The Bed which inspired Warhol's film of the same name), Julian Beck and others (including the founder of this site).

He also maintains a blog of his poetry, written every few days or weeks depending on his mood or inspiration, which I highly recommend at: michaeltownsendsmith.blogspot.com.

Warhol myth no. 2: Andy Warhol said "If you want to know all about Andy Warhol just look at the surface..."

Left: What Andy Warhol actually said. Right: What appeared in the press (Source: "The True Story of 'My True Story' by Matt Wrbican in Andy Warhol: A Guide to 706 Items in 2 hours 56 minutes: Other Voices Other Rooms, (2007))

March 4, 2020: Andy Warhol is sometimes quoted as saying something like "If you want to know all about Andy Warhol, just look at the surface: of my paintings and films and me, and there I am." But Warhol never said that. Matt Wrbican first pointed it out in the catalogue for the "Andy Warhol: Other Voices Other Rooms" exhibition which took place in London at the Hayward Gallery in October 2008. The transcript of the taped interview by Gretchen Berg (shown on the left) reveals that it was Berg who first brought up the "surface" and Warhol mostly agreed with her.

The quote appeared in different versions in different publications as I noted in 2009 in my review of Arthur Danto's biography of Andy Warhol:

Throughout his book Danto uses some of Warhol's most famous aphorisms to back up his ideas, particularly the often used quote, "If you want to know who Andy Warhol is, just look at my face, or at the surface of my work. It's all there." It comes from an interview with Warhol by Gretchen Berg which first appeared in the format of a long statement by the artist in the November 1, 1966 issue of the East Village Other and then, in an expanded and reedited form, as "Nothing to Lose" in the March 17, 1967 issue of the Los Angeles Free Press before finally appearing in the May 1967 issue of Cahiers du Cinéma. (SC317)

The quote that appeared in the East Village Other was slightly different than the version offered by Danto. The East Village Other version was "If you want to know all about Andy Warhol, just look at the surface: of my paintings and films and me, and there I am. There's nothing behind it." The interview was based on conversations with the artist over the course of three to four weeks, with Berg sometimes using a tape recorder and sometimes writing from memory. (KG84)

A comparison of the original conversation with what appeared in print shows that most of Warhol's comments were actually said by Berg rather than Warhol...

The anomaly was also pointed out later (in 2016) by London art writer, Gilda Williams, in On&By Andy Warhol and repeated by Warhol biographer Blake Gopnik - yet, some writers still use the quote as though Warhol actually said it.

March 3, 2020: With the Tate Museum's six month exhibition on Andy Warhol opening next week, I've decided to look at a few of the fallacies about Warhol that continue to exist. The first is that Warhol's paintings were silkscreens rather than paintings. The Tate's show will give viewers the chance to see that this is not the case and that Warhol's brush strokes are often noticeable in his paintings. Silk screening is used, but the paintings are not simply "silkscreens." That would make them prints, not paintings.

Look closely at his Death and Disasters series and you can easily see the brush strokes. Sometimes the brush strokes are as noticiable as the strokes of silver in Warhol's silver Electric Chairs and sometimes the hand painting is applied to look like a solid colour as in the Tunafish disasters.

When silk screening was employed, Warhol insisted upon preserving the mis-registration of the process as an artistic technique and added to it with hand-painting - as he searched for the "perfect imperfection". Randomness and imperfection were popular concepts in the art world at the time, including in the music of John Cage. (See "When did Andy Warhol meet John Cage?")

Andy Warhol did produce prints through entities like Factory Additions but those were prints. His paintings were paintings. (And by the way, beware of the fake "Factory Additions" that I uncovered ten years ago, which will hopefully not be making a comeback now that Warhol is in the news again.)

Q & A with Clare Henry after My Hustler and Haircut No. 1

March 2, 2020: Claire Henry of the The Andy Warhol Film Project, will be presenting two films directed by Andy Warhol, My Hustler and Haircut No. 1, at Mana Contemporary in New Jersey on March 21, 2020 from 3 - 5 pm. (One of the stars of My Hustler, Genevieve Charbin, can be found on Facebook as Genevieve Cerf.)

Andy Warhol in the Daily Mail

February 28, 2020: An account of Andy Warhol being shot by Valerie Solanas, based on Blake Gopnik's new biography of the artist, Warhol: A Life as Art, is in today's Daily Mail.

Andy Warhol in UK and Germany

Jonas Mekas and the Film-makers' Cinematheque

What Andy Warhol Didn't Do