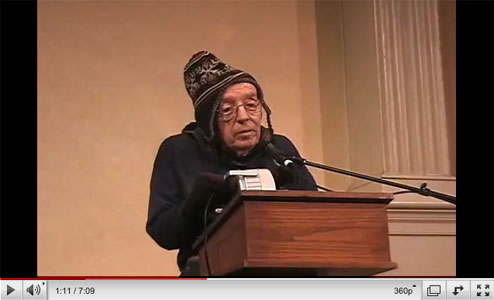 One of the stars of San Diego Surf, Taylor Mead, reads his poetry in NYC in 2010

According to Popism, Andy Warhol filmed San Diego Surf in May of 1968 in La Jolla, California - after Lonesome Cowboys but before he was shot by Valerie Solanas in June. The next major film, after San Diego Surf to be made by Warhol's group was Flesh which was directed by Paul Morrissey while Andy Warhol was in the hospital. (Flesh actually premiered in New York before Lonesome Cowboys even though it was shot afterwards). Paul Morrissey claims to have directed San Diego Surf, just as he claimed to have directed Lonesome Cowboys. Referring to San Diego Surf, Morrissey asserts "I cast it, I wrote it, I prodced it. I did everything. Why don't they attribute it to Lady Gaga? She's much more famous than Andy." (JHA) The film will be attributed to Warhol in the forthcoming Andy Warhol film catalogue raisonné. Scenes from a short documentary on Warhol making San Diego Surf, Andy Makes a Movie, show Warhol behind the camera at least some of the time. According to J. Hoberman in the New York Times, Surf was shot |"with two 16-millimeter cameras, one operated by Warhol and the other by Mr. Morrissey."

San Diego Surf was never released when Warhol was alive, although comments made by Warhol and his actors indicate that it was meant to be the next film to be released after Lonesome Cowboys. Instead, Warhol was shot at the beginning of June and Paul Morrissey made Flesh while he was recuperating from his gunshot wounds.

San Diego Surf was mentioned by Viva as early as 21 February 1968 during an appearance by her, Warhol and Paul Morrissey at the University of Ohio. They were appearing there because they (and at least five other colleges) had previously booked Warhol for an appearance in October 1967 and Warhol had sent Allen Midgette to impersonate him. When it was later discovered that it was Midgette and not Warhol who had appeared, Warhol had to fulfil his agreement and, hence, the 21st February appearance. (Midgette had reportedly taken the fee of $2,600 paid by the colleges - about $18,000 in 2015 terms - and apparently used it to fund a trip to Europe. (See U. Oregon blog.)

An article in The Daily Emerald newspaper about the 21 February appearance of Warhol - which they referred to the "Second Coming," noted that "future plans from the movie-makers incude a surfing film in which Viva! will star. Warhol said that if any of the students in the audience could surf, they should get in touch with him and he might be able to use them in his film." (See Daily Emerald.)

San Diego Surf was also mentioned as the next film to be released after Lonesome Cowboys in the 18 April 1968 issue of the Village Voice (reproduced on page one of the Lonesome Cowboys essay.) It was also mentioned in a radio interview in November 1968 (broadcast 16 December). Tom Hompertz, Taylor Mead and Bruce Haines were interviewed by Claire Clouzet on KPFA radio the day after Lonesome Cowboys was screened at the San Francisco International Film Festival. One of the interviewees asks Hompertz if he was in Warhol's surf movie and Hompertz replies, "A little bit - I do a little bit of surfing." When another intereviewee (Haines?) asks Mead if the surf movie has been edited, Mead replies that it is "close to being edited. We need a little more surf... We didn't get much."

Popism gives one reason why San Diego Surf may not have been released at the time - the footage wasn't that exciting.

La Jolla was one of the most beautiful places I'd ever seen.We rented a mansion by the sea and a couple of other houses for the people who were going to be in the movie - some of them had flown out with us and the others just met us there...Everybody was so happy being in La Jolla that the New York problems we usually made our movies about went away - the edge came right off everybody... From time to time I'd try to provoke a few fights so I could film them, but everybody was too relaxed even to fight. I guess that's why the whole thing turned out to be more of a momento of a bunch of friends taking a vacation together than a movie. (POP269)

In 1995 the Andy Warhol Foundation asked Paul Morrissey to "complete the editing" of San Diego Surf "in accordance with "existing notes." Mr. Morrissey denies that there were any notes - or that he only partially edited the film. However, during negotiations with the Foundation around that time, Morrissey agreed to waive the rights to a number of films, including San Diego Surf and Lonesome Cowboys in exchange for ownership of other films such as Trash and Flesh. (JHA)

Popism's description of La Jolla doesn't mention the overwhelming presence of the police. According to Victor Bockris in his biography of Warhol, the police were "all over" Warhol and his group "the minute they arrived." The F.B.I. were investigating Warhol's previous film, Lonesome Cowboys, but it's unknown whether they had contacted the authorities in La Jolla. Viva later recalled being stopped by the police on her way to do her laundry:

I don't remember much about shooting the film, other than being stopped by the police on the sidewalk as I was walking from one house we rented to another to do my laundry. I was wearing that same red crochet top that I have on in the movie. I can't remember if they arrested me, but the police stoped me for not wearing a bra. (CBN)

According to Bockris, the car that Warhol's entourage was in was pulled over by the police while they were scouting for locations. All six passengers, including Warhol, were "spread-eagled" against the car and interrogated. One of the actors in the film, Louis Waldon, later said "I felt so sorry for Andy. I thought it was very undignified to see Andy spread-eagled. I thought it was just hostile. But Andy sat back down and they interrogated each of us. They were looking for drugs and nobody had anything." (LD293)

According to Michael Boosin, who was given a small role as "The Big Kahuna" in San Diego Surf, Warhol and his entourage rented a different house in La Jolla after being stopped by the police and they "put the local police chief's daughter in the film to avoid any more police entanglements." Having seen this website, Boosin contacted me in 2007 and told me a number of things about the filming and about his friend, Eric Emerson, who was featured in the film, that hadn't been mentioned in previous accounts. Boosin had become involved with the film as a result of being friends with Eric Emerson. He had originally met Eric at the Ondine nightclub in New York. Eric stayed with Boosin in a castle in Hollywood that Boosin rented during 1967/68.

Boosin's castle was not the same "rock 'n roll" castle that Warhol and his entourage stayed at during their EPA performance at the Trip in 1966. The 1966 castle was located at 2630 Glendower Avenue. Boosin's castle was at 4857 Melrose Avenue. The realtor who rented the property to Boosin told him that the Melrose castle had originally been built by an ex-LA County Sheriff for his wife. 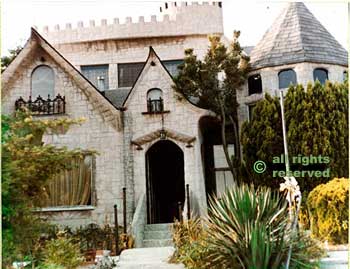 According to Boosin, it was Eric who originally suggested to Warhol that he come to California and make a movie.

Eric was totally overcome by me, the castle, my cars, the girlfriends and everything that went with it. Eric and I would hop in my 27 color 'candy-vette', drive up to the Sunset Strip, spend a couple of hours choosing our ladies of the night, stuff all 4 of us in the 'vette' and drive back to the castle. Things got so intense that I stopped taking the 'vette' and drove my El Camino up there - this way we could load 4 or 5 or 6 ladies in the back and take the whole gang back home. Eric called Andy, told him of this ultra-intense lifestyle and suggested that Andy come down and make a movie. One way or another it got decided that Andy would come down, use Eric and me and use that Corvette. (MI)

Boosin recalls that the opening of the film was supposed to be Louis Waldon driving Boosin's "very very psychedelic corvette." Although Boosin never saw the finished film, he was shown rushes where Ingrid Superstar was sitting on his lap with her "kinda interviewing me to see what kind of husband I'd make (I think)" and recalls that the shooting was "typical Andy - no script - strictly ad lib." Just prior to his scene, Eric and Michael had done "a fistful of tuinals, to "take the edge off the spontaneous acting."

In regard to Warhol, Boosin recalls that "I never got to know Andy in depth and perhaps no one did. He was quiet, withdrawn, studious. He spoke with a minimum of words in a quiet voice. When he had something to say on the set, he'd tell it to Paul Morrissey, very quietly."

The filming lasted almost three weeks. According to Joe Dallesandro, the cast was not really aware of what they would be shooting when they arrived in California, but one idea was that they should continue with the Romeo and Juliet theme that was originally suggested for Lonesome Cowboys - particularly because the cast was very much the same. (JOE64) In addition to Joe, other cast members who appeared in both Lonesome Cowboys and San Diego Surf were Louis Waldon, Taylor Mead, Tom Hompertz and Viva.

According to Victor Bockris, Viva became increasingly irritated with Paul Morrissey during the filming - at one point shouting to Louis Waldon, "if you're a real man you'll beat the shit out of him [Morrissey] and save this film from his cheap commercial tricks." (LD294) Viva was further irritated when Michael Boosin convinced her that he and Eric had put mescaline in her drink. She had earlier complained that she wasn't feeling very well and while Boosin was giving her a massage in the bedroom, he told her that maybe the reason she was feeling ill was because of the mescaline he and Eric had put in the coffee/tea. Boosin let Viva "scream and carry on for about ten seconds" before telling her that they had not, in fact, spiked her drink. But according to Boosin, Viva "never got back to normal that day," adding "did I use the word normal while talking about Viva...." (MI)

The film finally premiered on 16 October 2012 as part of the 10th MoMA International Festival of Film Preservation at the Museum of Modern Art in New York.