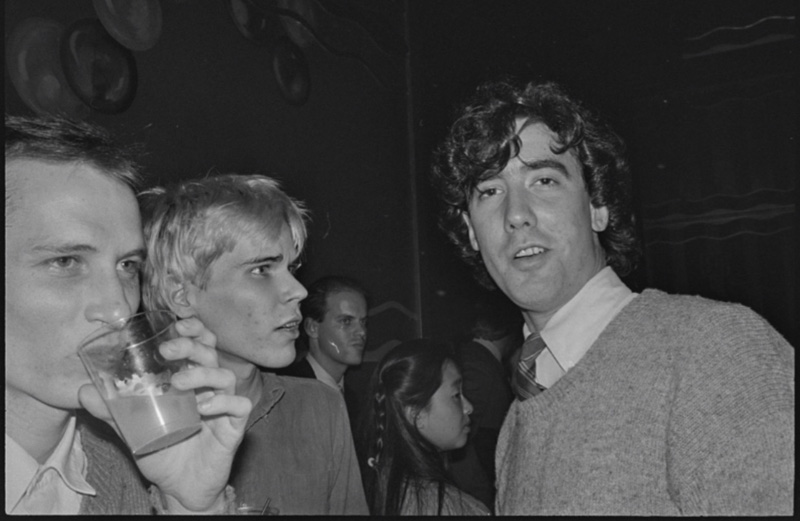 Gary Comenas is the site author of warholstars.org. The site is dedicated to the art writer, collector and friend, William S. Wilson (Bill Wilson).

Many sites nowadays are littered with pop-up ads and make it difficult to save pages as PDF files. This site is ad-free and PDF friendly. Please feel free to take what information you need from the site. I did not start it for financial gain. I do not view Andy Warhol as a social media personality - I view him as an artist - as influential an artist as Marcel Duchamp or Leonardo. The only thing I ask is that you give credit where credit is due - the accepted source reference for information taken from a website is the name of the author (i.e. myself), the name of the essay or section, the site name and URL address, and the date accessed.

This website began as a site about Andy Warhol's films and the superstars in them, and has expanded to include his art and sculptures. Go to citations for a partial list of books and articles which have used the site as a reference source.

Click on Sections, Interviews and Archive to access most areas of the site, or type a question or search term in the search box below which also appears at the top of each page. (Scroll down when you get to the results page.)

Andy Warhol made more than 600 films and videos in his lifetime, including what became known as the Screen Tests, which are different than the full-length films called Screen Tests 1, 2 and 3 that he made with Ron Tavel as the interrogator (including the never-released film Suicide.)

Gary Comenas can be contacted at garycom.now@gmail.com.

Gary Comenas (Co-may-ness) was a Press Officer for Island Records prior to starting the site - he was Mica Paris and Andy Shepard's first press officer and worked with artists such as Anthrax, Eric B. and Rakim, and the B52's which he wrote about in his book, The Real World (2020). His published writings also include "Andy Warhol's Screen Tests" in DIA's Andy, (Dia Art Foundation, 2005).

Comenas has also written fiction and is a member of the Crime Writers' Association. His latest book is a low-brow pulp fiction crime thriller that takes place in New York's fashion industry called Murder-to-Wear - one of the few books in the genre to include LGBTQ+ characters. The sequel - Suspect Everyone! - has just been published and is available at most outlets: 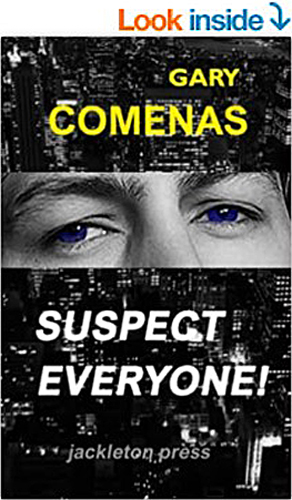 Gary Comenas also moderated "A Night with Andy Warhol's Superstars," at the Purcell Room in London on October 9, 2008 with guests Holly Woodlawn, Mary Woronov and Bibbe Hansen. The event took place in conjunction with the "Andy Warhol: Other Voices, Other Rooms" exhibition at the Hayward Gallery.

A chapter on Gary Comenas appears in Catherine Johnson's Thank you Andy Warhol. He was also a consultant to Alison Jackson when she was making her Andy Warhol documentary for the South Bank Show.

Gary Comenas and/or the site have also been mentioned in The Art Newspaper, The New York Times, The New York Post, The Daily Telegraph, The Daily Mail, The Atlantic, and ArtInfo. Other citations appear here.

A considerable amount of essay writers have also referenced the author or his site, worldwide, in Wikipedia.

"Compiled as a labor of love by Gary Comenas, a London-based arts commentator, warholstars is devoted primarily to documenting the life, times and legacy of Andy Warhol. Everything you ever wanted to know about Warhol - and much more! In addition, however, there's an extensive and painstaking chronology of Abstract Expressionism.

Comenas has scoured the literature and put together a detailed, well-researched time line of developments in American modernism, the emergence of the New York School, and beyond." Helen Harrison, Stoney Brook University Libraries (Pollock - Krasner Collection)

"I wish to thank Gary Comenas, who traces all of Duchamp's transatlantic voyages and their ships in his warholstars.org website; the research at his site overall substantially contributes to the history of Surrealism and Abstract Expressionism and their influences." Celia Rabinovitch, Duchamp's Pipe: A Chess Romance (Berkeley, North Atlantic Books, 2020)

"... warholstars.org [is] a valuable resource for fans, scholars, and journalists. The site is run by Gary Comenas, an independent researcher in London who has meticulously documented key aspects of Warholia." Victor P. Corona, Night Class: A Downtown Memoir (New York: Soft Skull, 2017)

"I want to thank Gary Comenas, author of Warholstars.org, for his assistance. Warholstars is really something special, an invaluable resource for anyone interested in Warhol and those around him. In correspondence with Gary, I have learnt a huge amount and, through his support for my project, he has gained my lasting affection." Thomas Morgan Evans, 3D Warhol: Andy Warhol and Sculpture (London: I.B. Tauris, 2017)

"Gary Comenas of www.warholstars.org should be applauded. He has been an early influence, a dedicated curator and advocate for truth in all things Andy Warhol." Thomas Kiedrowski, Andy Warhol's New York City: Four Walks, Uptown to Downtown (NY: The Little Bookroom, 2011)

"Although I've never met him, I must acknowledge Gary Comenas, creator of warholstars.org, a site I visited daily during my research. Gary's site could be the very best resource on Andy Warhol there is - either in print or on the web." Kenneth Goldsmith, I'll Be Your Mirror, The Selected Andy Warhol Interviews 1962 - 1987 (NY: Carroll & Graf Publishers, 2004)

I first became intererested in Andy Warhol's films while studying Film Theory at U.C. Berkeley. Later, in New York City, I saw him almost weekly at Mr. Chow or through the club scene (details in The Real World).

Warholstars is not really a "fan" site - there are plenty of fan "pages" on social media - it's more of a collection of essays and interviews about the Warhol era. Initially, I was fascinated by the druggy lives of Warhol's superstars but as time went on I realised the important role that Andy Warhol played in the art history and much of my timeline is devoted to Pop Art as a revolutionary return to figuration in a world of Abstract Expressionism. Interestingly, the term "pop art" was used in England before the U.S. - by the Smithsons.

I've met a fascinating array of characters through this site, but the ones I found most interesting were those who had been previously unknown - the 'outsiders' of the 'in' crowd - like the mother of one of Eric Emerson's kids whose correspondence formed the basis of the Wonderboy essay, and gave me an insider's account of Eric, his sometimes sadistic nature, and what it was like to be part of the 1960s counter-culture crowd. It turned out that she was one of the people in a famous Cecil Beaton photograph of the Factory crowd (scroll down when you get to the link), but had not been identified previously.

The advantage of a website over a book is that I am just one click away which makes it easier for some of the lesser known characters to contact me directly. For instance, the guy who ran the open stage at the DOM was able to give me the low-down of how Lou Reed and the Velvet Underground came to play there.

There is one person I met through this site - the art writer and collector, William S. Wilson - who I will never forget. Bill's death was the catalyst for writing The Real World and it is to him that I dedicate this site.

A lot has happened Warhol-wise during the past two decades - so many exhibitions, books and parties, along with the tragic suicides of Callie Angell (author of the first volume of the film catalogue raisonne) and Jean Stein, and the deaths of so many superstars. When I first started the site I hadn't planned on having to deal with the deaths of people I had grown close to like Andy Warhol's scriptwriter, Ron Tavel and Factory "foreman" and photographer, Billy Name. Billy was the only person who actually lived at the Factory and his legacy is kept alive through The Estate of Billy Name.

Trawling though my list of Warhol's superstars, I wonder and worry about who is going to be next.

Writing about Andy Warhol is no easy task. There is almost "too much" information about him out there and, certainly, too much disinformation. To understand his importance in the history or art, you also need to know about Marcel Duchamp, John Cage, Robert Rauschenberg and Jasper Johns, and the whole cultural scene of New York at the time - hippies, drugs, poetry cafes, off-off-off Broadway, fashion, nightclubs and more drugs. I have tried to incorporate all of this in my timeline. (To the '60s)

Other controversies during the first twenty years of this site included the plethora of Warhol "fakes" - from a fake niece of Edie Sedgwick (confirmed as a fake in correspondence from Edie's family) to a cabaret entertainer named Penny Arcade who claims to be a"Warhol superstar" but isn't mentioned in Warhol biographies and never appeared in a film directed by Andy Warhol to dubious paintings like the artwork that Andy Fields claimed was a childhood paintings by Andy Warhol (denied by Warhol's family).

In some google entries, Andy Fields criticises me for a "scathing attack" on his "good nature." There was no scathing attack. Mr. Fields claimed to have purchased a drawing which he said was by Andy Warhol in a garage sale in Las Vegas. Warhol's brother issued a statement through my site saying that the drawing was not by Andy Warhol. The Warhol scholar, Patrick Smith, also denied its authenticity. The Royal West of England Academy in Bristol also issued a statement saying that they did not "support any claims of authentication by the owner."

Andy Fields also alleged that the drawing was on the back of a sketch by Gertrude Stein. The authenticity of that drawing was denied in a statement by Gertrude Stein expert Wanda Corn. Fields' father had previously been convicted of "conspiracy to obtain cash and property by deception" in an unrelated case.

And there was also the Pietro Psaier saga that made The Times and Telegraph in London but first revealed on this site, with a cast of characters which included the gangster John Fairchild and his family. A lot went on in the background of that case that never made it to the site, including warnings that I was in danger because of my coverage.

More than twenty years after starting this site, I continue to work on it. I once said to Bill Wilson that it was like my own Winchester Mystery House. Legend has it that the owner of that house feared that she would die if she stopped renovating it - hence the stairways that lead to nothing. I continue, in 2022, to build my own stairways to nothing(ness) with this website, fearful that if I stop, I will stop.

Most of all, I hope you enjoy browsing through the site - enjoy the ride!

With peace and love,