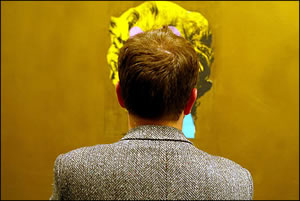 Gerard Malanga: "Andy embraced his mistakes. We never rejected anything. In other words, if we were in the process of making a series of paintings and all of a sudden one painting went off a bit, or the image inadevertently overlapped the previous image, we kept right on moving along. We'd keep it, or, as Andy would say, 'It's part of the art.' (GMW37)

Andy Warhol exhibited at the Loft at least three times - two group shows that opened on April 9, 1954 and May 17, 1954 and a solo show that opened on October 10, 1954. In Andy Warhol's New York, Thomas Kiedrowski describes Warhol's contribution to the first show as an installation of pyramidal shapes that had fallen to the floor. That description was applied to "Andy's second show" at the Loft during an interview with Vito Giallo in Unseen Warhol, in which the pyramidal shapes were referred to by the interviewer as as Warhol's "Origami" show. (UW20) According to Giallo in Unseen Warhol, the April group show featured Warhol's "pen and ink line drawings, all simple, all outlines" that "were just pinned up to the wall, about eight by ten inches, nothing framed at all" which incorporated Warhol's "blotting technique." Giallo recalled in the Unseen Warhol interview that the 'origami' show was Warhol's second show at the Loft and was his first solo show at the gallery.

He [Andy Warhol] didn’t call it Origami at all. But that’s the best description of it. He would start with a square piece of paper. He would take the paper, and then he would fold it, and somehow he got a lot of pyramids out of it. Then he would open it up one way or another, and some pyramids would be sticking out. Next he would do drawings of heads and people on parts of the pyramids, and he did a lot of marbleizing, oil on water. Finally, he’d hang them up so that they were sticking out from the wall. We used pushpins to hang them up, and they kept falling down; I must have picked those pieces up a hundred times.

I think he threw them all out. He never sold anything at the gallery. Very few of us did. But I know nobody even looked at this show. I thought it was fascinating. I was amazed. It was his turn to do a one-man show, and I thought it would be drawings and paintings, something straightforward. And then those things came in. I was just shocked.’ (UW22)

Artist Vito Giallo appropriated the front room of Jack Wolfgang Beck's large loft space here to hold art exhibits beginning in 1954. Giallo, along with his friends Nathan Gluck and Clint Hamilton, deliberated over who should be invited to be part of the gallery. They decided to ask Andy Warhol to join the collective.

The first show opened on April 9 with seven artists: Beck, Giallo, Jacques B. Willaumez, Edward Rager and three Carnegie Tech alumni: Allan Hugh Clarke, Gillian Jagger, and Andy Warhol. Warhol's work resembled more of an installation than a show of traditional paintings. He drew small figures on pieces of marbled Strathmore paper, then folded them into large pyramidal shapes. The ten or so works were pinned to the wall, but the weight made them fall to the ground more often than not. Reviewers nicknamed the works 'crumpled' drawings, after repeated falling and re-pinning.

On May 17, Warhol was part of a group show including Allan Hugh Clarke and Edward Rager, but this time he illustrated poems and hung them in a conventional manner. They reminded one reviewer of unrefined imitations of Jean Cocteau drawings.

Warhol's last show at the Loft would be his first solo New York show, opening October 10, 1954, and featuring drawings of the famous dancer John Butler. Giallo remembers that they were astounded when John Butler came to the show. The dancer received several drawings from Warhol in 1954.

By the summer of 1955, the Loft Gallery would closed, ending with a show of collages by Clint Hamilton. Giallo, who had managed the gallery , immediately started to work for Warhol... After Giallo left the job in 1956, Warhol employed Nathan Gluck as an assistant until the mid-sixties, paying him the minimum wage as he did with Giallo and later paid assistants. (TKA79, 86)

The first public showing of Warhol's Pop canvases was as part of a window display at Bonwit Teller. The paintings shown were Advertisement, Before and After (1), Little King, Superman and Saturday's Popeye. (RN469) (See also Warhol's comic book paintings and ROY LICHTENSTEIN.)
April 1961

From the The Andy Warhol Catalogue Raisonné Vol. 1: Paintings and Sculpture 1961-1963

"Andy Warhol's first exhibition in the 1960s was a window display in one of Bonwit Teller's Fifty-seventh Street windows, in which five paintings were shown for one week in April 1961. Most window displays were coordinated by the display director, Gene Moore, but this one was initiated and installed by Clinton Hamilton, who knew Warhol through Nathan Gluck. Hamilton has recalled that although he visited Warhol's studio and selected paintings for the window, Warhol delivered different works. Displays were usually on view for one week and changed on Tuesdays. Since the source of Little King is dated April 3, it is most likely that the paintings were on view the week of either April 11 or April 18. Warhol's window seems to have been little noticed at the time." (RN469)

Pasadena: Pasadena Art Museum
Andy Warhol
May 12 - June 21, 1970 (Exhibition travelled to the Museum of Contemporary Art in Chicago, the Stedelijk Van Abbemuseum in Eindhoven, the Musee d'Art Moderne de la Ville de Paris in Paris, The Tate Gallery in London and the Whitney Museum of American Art in New York)

Providence: Museum of Art, Rhode Island School of Design
Raid the Icebox I with Andy Warhol

Stuttgart: Wurttembergischer Kunstverein
Andy Warhol: Das zeichnerische Werk 1942-1975
February 19 - March 28, 1976 (Exhibition travelled to the Stadtische Kunsthalle in Dusseldorf, the Kunsthalle in Bremen, the Stadtische Galerie im Lenbachhaus in Munich, the Haus am Waldsee in Berlin, the Museum Moderner Kunst, Museum des 20 in Vienna and the Kunstmuseum in Lucerne).

"The Cats and Dogs Series, commissioned by the James Mayor Gallery in pet-loving London, bombed when they were shown there in 1976, and bombed again when Mayor arranged for Andy to bring them to Kuwait in January 1977 - though that might have had more to do with the fact that most Arabs don't believe in representational art. Andy had already been paid several hundred thousand pounds by Mayor and his backers, so he wasn't left holding the kitty litter..." (BC339)

In 1979, Warhol was painting Retrospectives and Reversals, doing commissioned portraits which included one of Louis Danelian's son and produced Prints which included Space Fruits, Shadows, Grapes and Gems.

Louise Danelian was the owner of several Courreges boutiques who commissioned Warhol to do a drawing of her teenage son for $8,000.00. (BC435)

"$800,000... was the amount the Michael Zivian Gallery, in New York, paid for the Space Fruits series it commissioned and exhibited in May 1979.

Andy stepped up his print production greatly in 1979, putting out no fewer than eleven separate editions, including Space Fruits and five different sets on the Shadows theme. Those were small editions, of three to fifteen portfolios each, but the After the Party edition, which was to be sold with a limited edition of the Exposures book, number one thousand.

There were two editions of Grapes (of fifty and forty portfolios) and Gems (twenty portfolios), which I always thought were a gimmick allowing Andy to tax deduct some of his ever-growing collectin of loose stones, precious and semi-precious. The Grapes I and II and Gems portfolios were published by Andy Warhol Enterprises, not commissioned...

Andy's creative directions to Rupert [Smith] were sometimes direct: no red, lighter, darker. But often they were as vague as those he gave me on Exposures: He wanted the prints to be more something or less something, but he couldn't say what that something was. Andy always refused Rupert's invitations to supervise the work in progress at his studio in Tribeca.

'I don't want to see your doors and sinks and ashtrays,' he told Rupert, 'because then I'll start imagining how robberies and floods and fires could hapen there too.'" (BC430)

The Beuys by Warhol series was jointly commissioned by the Hans Meyer Gallery of Dusseldorf and the Lucio Amelio Gallery of Naples. Beuys was everything Andy was not: intellectual, political, anti-fashionable. At the press conference after the Naples opening, Beuys went on and on about art and history and philosophy, while Andy sat there staring at Sao Schlumberger's big emerald ring.

Beuys was very involved with the new Green Party and let it be known tht he would like Andy to contribute a poster for their 1980 election campaign. Andy agreed - the Beuys deal was too big to say no. When the then Factory receptionist, Princess ('Pingle') Ingeborg of Schleswig-Holstein, a sweet-hearted, plain-dressing young German arisocrat, heard about it, she had a fit. The Green Party was an East German front, she said.

Fred [Hughes] told her that Andy had to do it for business. "You care more about money than my country!" Princess Pingle screamed. Later, in tears, she told me she was considering quitting her job. "I just can't go on working for a person," she sobbed, "who would make a political statement without even knowing what it means."(BC445)

Ridgefield, CT: Aldrich Museum of Contemporary Art
Andy Warhol in the 1980's (Exhibition travelled to the Aspen Center for the Visual Arts in Aspen.)