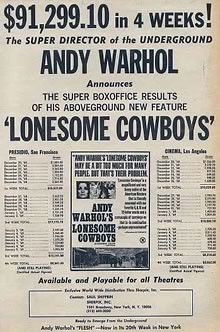 Filming commenced for Lonesome Cowboys at the end of January 1968 on location in Oracle, Arizona. Two movie sets were used: Old Tucson - a country style Main Street erected in 1939 which, at the time, was still used for filming Westerns, including the Death Valley Days television series; and Rancho Linda Vista - a guest ranch of more than 80 acres with individual bungalows for the cast members.

The filming was watched by tourists and allegedly one of them complained and the F.B.I. got involved.

... everyone was gathered around the corral area. They were taking various shots and poses. They had sound equipment recording all the conversation. The language was vulgar and "hippish". He heard them mention MARLO BRANDO once. One fellow, described as a white male, American, 5'7", 145 pounds, 32 to 35 years of age, with receding hairline and a large head, stated that he enjoyed sexual relations with a horse more than he did with a man or girl. The man recording the conversations was described as a white male, American, 26 to 27 years of age, 5' 9", 155 pounds and long hair, who was carrying a boy about four or five years of age around with him on his hip. The man with the receding hairline and large head was on a horse and another man was up in a tree hanging by his feet and was kissing this large-headed man on the lips... (SM)

"[The complainant] stated that one of the male actor's picture and VIVA's (last name unknown) picture appeared in the Phoenix paper about two or three weeks ago. VIVA, the man whose picture was in the paper, the big-headed man and a fourth individual said to the spectators, "Give us the script, tell us what to do." The cameras were running and the film was in the lower part of the corral. The girl, VIVA, was wearing purple pants and shirt. The male actors in the film tackled the girl and threw her to the ground among the dirt, rocks and horse manure. One of the actors yelled "Strip her." Three of the male actors took her clothes off; she was naked... There were about thirty spectators around watching the filming. It was about 2 PM in the afternoon..." (SM)

In one of the reports, the complainant described Warhol: "The person running the project was a white male, American, 35 to 38 years of age, 5' 7", 150 pounds, glasses bad complexion, rag type hat." (SG)

The cast and crew of Lonesome Cowboys were eventually driven out of town just like in a real western. According to Popism, the grips, the electricians, and the people who built the sets formed a vigilante committee to run us [Warhol and his cronies] out of town, just like in a real cowboy movie. We were all standing on the drugstore porch, except for Eric [Emerson], who was doing his ballet exercises at the hitching post, when a group of them came over and said, 'you perverted easterners, go back the hell where you came from.' " (POP262)

The night before leaving Arizona, nobody could find Eric Emerson. Warhol eventually found him in an old adobe chapel in an empty field surrounded by mountains.

"He [Eric Emerson] didn't hear me walk in, and I stood at the back of the chapel watching him. On the walls were hundreds of pictures of Indian boys - soldiers from around Tucson who'd died in Vietnam - and beside each picture was a little name card and a candle and each soldier's personal jewelry. Eric was standing in front of one of the cards. I went over to him and asked how long he'd been standing there, and he said, 'There're so many.' He'd been standing there for hours."(Ibid)

The FBI's interest in the Lonesome Cowboys continued after Warhol and his entourage left town. When the film was shown at the San Francisco International Film Festival on November 1, 1968, the FBI were there to review it, failing to notice that one of the actors, Julian Burroughs, was actually a deserter who was on the run from the U.S. military:

"The characters in the film were a woman, played by VIVA; her male nurse, played by TAYLOR MEAD; a sheriff who resided in a small Arizona town - population three; and a group of about five cowboys with an additional new member called "Boy Julian." All of the males in the cast displayed homosexual tendencies and conducted themselves toward one another in an effeminate manner. Many of the cast portrayed their parts as if in a stupor from marijuana, drugs or alcohol." (SM)

The FBI considered prosecuting Warhol for interstate transportation of obscene matter - for driving the film footage back to New York from Arizona - but declined prosecution, possibly because their report noted that "at no time did the camera show penetration..." (sm)

Upon returning to New York, Warhol moved the Factory from 47th Street to more business-like offices at Union Square. The new building had actually been found by Paul Morrissey at the end of 1967 when Warhol was notified by his landlord at 47th Street that the building was being torn down. While Paul was stripping wood at the new location, a young man delivered a Western Union telegram and Paul ended up hiring him to help with the stripping. It was Jed Johnson, who would eventually become Andy's live-in boyfriend and would also go on to direct the film, Andy Warhol's Bad, in the Spring of 1976.

Many of the cast members who appeared in Lonesome Cowboys also appeared in Warhol's next film, but this time it was a surf film instead of a western. It was: