Trash in London
(page one) 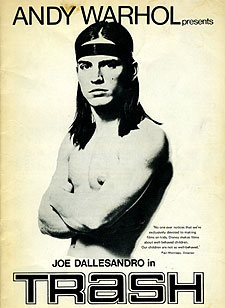 Front cover of the original Trash program in England

Below is an account of the censorship struggle with Trash in England which appeared in the program brochure for the film. The account included numerous reproductions of press articles only a portion of which are included in the following version due to space limitations. The brochure also included transcribed dialogue from the film for two scenes (Geri Miller giving Joe Dallesandro a blow job and dancing naked and Holly Woodlawn selling drugs to a high school student); an article from the summer 1970 issue of Sight & Sound magazine (Dennis J. Cipnic, "Andy Warhol - iconographer"); an article for the Saturday Review section of The Times (John Russell Taylor, "Andy Warhol and the twilight of the stars"); and numerous photographs including film stills and Andy Warhol seated in front of his Flowers paintings and Warhol in front of a Self-Portrait. On the inside back cover is an ad for the film's U.K. distributor, Vaughan Films Ltd, listing the following Warhol films: Flesh, Lonesome Cowboys, My Hustler, Bike Boy, Kitchen, The Shopper, Trash, Heat, L'Amour and Women in Revolt.

In February 1971, the story began. The Andy Warhol exhibition opened at the Tate. That week, John Trevelyan, the censor, saw Trash. At last, said the censor, Morrissey and Warhol had come to terms with "professional commercial film-making." The matter of a certificate was raised and left in the air.

Flesh was due to open in Chelsea. In spite of giving Flesh a certificate, the censor's office was apprehensive. Was the censor going to be inundated by letters from moral vigilantes? Flesh opened and ran week after week.

In the eleventh week a letter arrived at the British Board of Film Censors Office from a lady protesting the "shameful" showing of Flesh. The lady had not seen the film.

We were soon back at the censors. "Wouldn't it be a good idea if we showed it to some of the leading film critics?" We agreed. 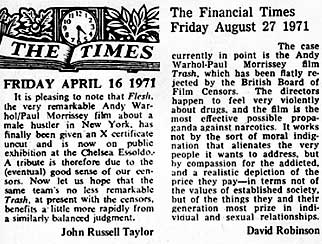 We still had no certificate. Once again, we returned to the Film Censors. It was now June and John Trevelyan was on the point of retiring. The new censor, Stephen Murphy, was about to make his debut. We arranged a screening for Mr. Murphy. At this stage, neither the outgoing nor incoming censor was prepared to accept or reject Trash. The matter was shelved - again.

On the 20th July, we wrote to the censor saying, "I don't really feel that Trash presents so many problems."

His reply was instant, "...it will be wrong of me to encourage you to think that Trash is going to be an easy one to solve."

In desperation, we decided to give a series of screenings to psychologists and Members of Parliament to try and clarify what the possible problems were.

A leading psychologist writes to the censor:

"I was a member of the Government Advisory Committee on Drug Dependence from its inception until it disbanded in January of this year. You will understand, therefore, that I am very concerned about the consequences of heroin addiction and the misuse of other drugs. I was surprised to learn that you had decided not to give a licence to Andy Warhol's Trash. I have seen this film and regard it as one of the strongest statements against heroin that I have ever seen. This film uses precisely the language and style that will get across to the young hip drifter - exactly the type that is most likely to be tempted to use heroin. The sexual incapacity of the addict in the film is just the kind of argument that would convince young people that heroin is not for them. I earnestly request you to reconsider your decision to ban this film, because I believe its showing may persuade many young people not to experiment with narcotics."

[Note: Other letters of support in the brochure which are not included in this reproduction of the article are letters from Lord Raglan and Viscount Norwich and comments by St. John-Stevas and Lady Beaumont of Whitley.]

We then submitted the film to the G.L.C. [Greater London Council]. The film arrived there a week after the anti-permissives had lost out on banning The Devils. Trash was thrown to the wolves! 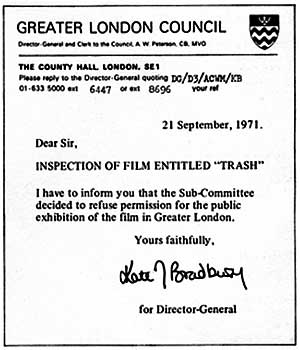 So Trash was withheld from the public. But in November 1971 it was screened at the London Film Festival to enthusiastic audiences.

The critics took the opportunity to air their opinions... 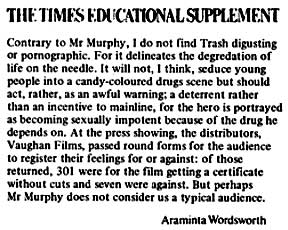 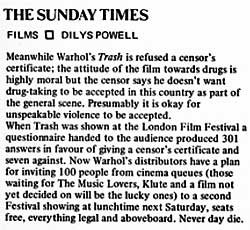