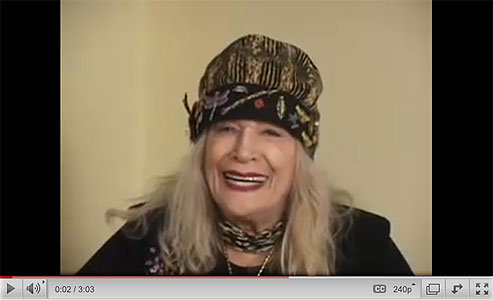 One of the stars of Heat, Sylvia Miles, talks about Joe Dallesandro

Heat was the last film that Andrea Feldman made with Warhol before committing sucide. Because of her suicide, Andy, Paul Morrissey and Fred Hughes decided that the the premiere of the film on October 5 at the Lincoln Center Film Festival should be a "quiet number." Sylvia Miles and Pat Ast disgreed and tried to get Bob Colacello to reverse the decision.

Andy didn't go to Hollywood for the filming but Paul Morrissey would call the Factory every morning before they started shooting. Jed Johnson would call Andy every night after the shooting. Andy would also make late night calls to Sylvia, Andrea and Pat Ast. According to Bob Colacello, the "three actresses were meant to hate each other - they were all, in the typical Paul Morrissey schema, after Joe - and after Andy's calls they did. He made Sylvia jealous of Pat's Halston muumuus. He made Pat jealous of Sylvia's star billing. And... it didn't take much to drive poor Andrea crazy." (BC131)

The dialogue of the film was unscripted for the most part. It was meant to be a take - off on Sunset Boulevard with Sylvia Miles as an aging actress pursuing a younger Joe Dallesandro who rejects her in the end. John Cale composed the film's musical score heard at the opening and ending of the film. (JOE111)

The last scene of Heat was filmed in the New York apartment (Second Avenue in the Fifties) of Brooks and Adriana Jackson. It was their pet ocelet, Trumba (Italian for mixed-up), who appeared in the film. A few nights after the scene was shot, an electrical fire engulfed the apartment. Brooks saved Trumba, Adriana saved their Picasso gouache but suffered third degree burns on both hands from the red-hot gilt frame. She did not blame the film crew, "even though the fire might have somehow been caused by the film equipment." (BC114)

Sally Todd's (Sylvia Miles) "mortgaged up manor" in Hollywood was formerly owned by Boris Karloff in real life. (BC130)

Also in the cast was Harold Stevenson, an Iolas Gallery artist, who had a small part in the film.

Heat cost between $50,000 - $100,000 to make. It took in two million dollars in the states and was "praised by the established critics from Cannes to Venice and from New York to Los Angeles". (BC136) Critics Vincent Canby, Rex Reed and Variety magazine all gave Heat good reviews. Some critics, however, were not so impressed:

Time Magazine: "a faggot rehash of Sunset Boulevard... [that] exploits the sorry selection of freaks who have been recruited for the cast. What is despicable about Heat is the way it both flaunts and mocks the grotesqueries of its cast, who seem generally neither to notice nor greatly care." (JOE109)

Peter Schjeldahl: "Miss Feldman, with her twisted little face and frightening laugh, was clearly in a bad way, and the pitiless exposure of her suicidal mood makes Heat a repellent document." (JOE109)