An earlier version of this essay is available on request or at: "Notes on John Cage, Erik Satie's Vexations and Andy Warhol's Sleep." See also "When did Andy Warhol meet John Cage?" 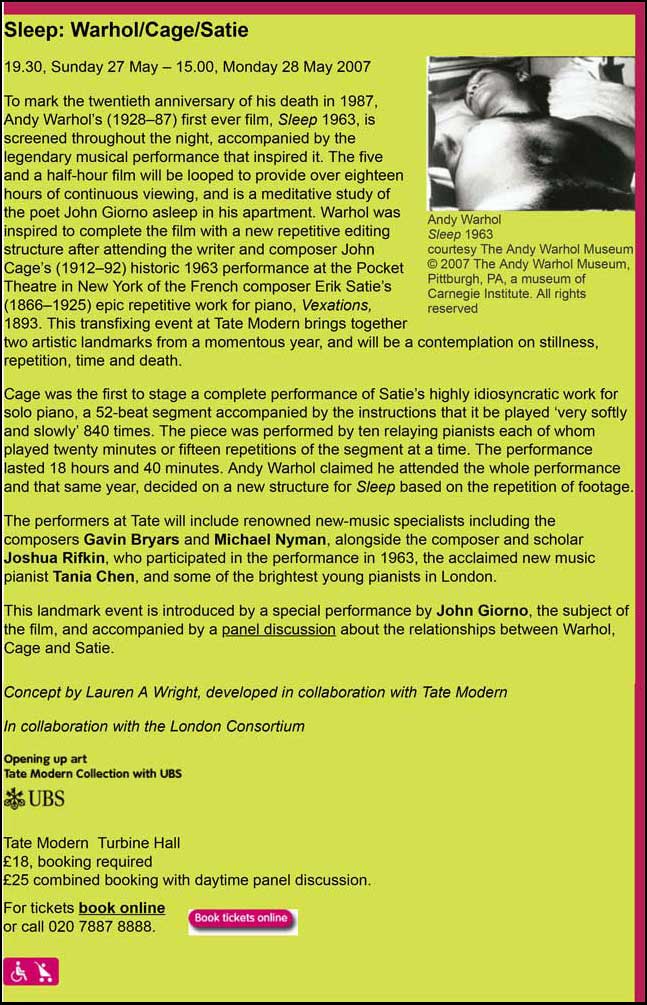 On Sunday, May 27, 2007 the Tate Modern in London showed Andy Warhol's Sleep. According to the Tate's announcement (above), the film was shown "throughout the night, accompanied by the legendary musical performance that inspired it" - Eric Satie's Vexations.

After I posted a notice about the event, I received the following email from Callie Angell, the author of the first volume of the film catalogue raisonné:

Hi, Gary – I just read your notes on Sleep and John Cage. I’m wondering if this is a response to the “Vexations”/Sleep event at the Tate Modern this weekend? Stuart Comer invited me to be on the panel discussion in connection with this event – I couldn’t make it, but I made a point of disagreeing with him in my return email about Sleep being inspired by Vexations, as he has been advertising I think the editing of Sleep might have been inspired by Vexations, but not the idea for the film – a man sleeping for eight hours – which Warhol had been thinking about since the previous spring... (Email Callie Angell to Gary Comenas, "Cage and Sleep," 25 May 2007)

Callie's comment tallies with what she wrote previously in the 1994 publication, The Films of Andy Warhol, Part II: "Warhol's use of repetition in the editing of Sleep was probably influenced by the September 1963 performance of Erik Satie's Vexations (1893-95), which he attended at a time when he had shot most of the footage for his film but had not yet begun to edit it. Warhol discussed Satie's use of repetition with John Cage, who was the organizer of the event." The claim is footnoted "Conversation with Billy Name, October 28, 1993." (Callie Angell, The Films of Andy Warhol: Part II (NY: Whitney Museum of Modern Art, 1994), p. 11)

The September 1963 performance that John Cage organized took place on September 9th and 10th at the Pocket Theater in New York. I was in touch with Billy Name about other matters in 2009 and asked him about Callie's footnote:

Hi Billy, Thanks for that. Steven Kasher sent me an announcement about his sale so I can mention that. Had a bit of a health problem today and have spent most of the day at the clinic - don't have the energy to deal with the site today - am just going to chill out - but I should be able to put something up tomorrow morning.

One thing that I want to ask you about. In the 1994 booklet, The Films of Andy Warhol, Callie Angell mentions that Warhol attended the John Cage production of Eric Satie's Vexations in September 1963 and that "after the performance, Warhol discussed Satie's use of repetition" with Cage. Her footnote indicates that the information came from a "Conversation with Billy Name" in 1993.

Did you actually go to the concert with Warhol in '63? Where you there when Warhol spoke to Cage about repetition? Do you recall anything about the conversation? Or was it something that Warhol told you ie told you he had been to the concert and spoke to Cage? It's just that in a quote from the Edie book, Cage says that he "didn't realize" that Warhol was there. all the best, gary

hi gary - i'm having a strange day, too. i think it's the combination of the solstice yesterday and the full moon today, with both the sun and the moon going into cancer. don't be too concerned because it's very overwhelming. i've been unable to be up and around saturday, sunday, and today. it's very powerful, but very slow, so it seems like its debilitating, but it's only in a heavy gear.

here's what i recall about the cage/warhol/satie situation, and it's now become very fragmentary. andy and i and john cage in an elevator going up. andy and john cage talking about the satie piece in a delightful way and how it reflects the way both of them were working at that time. andy mentioned his multiples in terms of painting (silk screens). it's really a long time ago but i do clearly remember that little incident in the elevator. where did it take place? in 1963 andy and i were going out together to art openings, movies, and other events, like vexations, pretty regularly. at that time i knew john cage as well as i knew andy, maybe a little better, having attended and performed in a piece of his in a festival in montreal, and having spent weekends with him and the group at stoney point, ny, with nick cernovich.

the sun did the solstice (stand still) and will now commence it's return to the south as the days grow shorter, and the moon is now a new moon today and will show it's crescent (the calends, hence the word calendar) until it is full again on july 7. pay attention to the moon phases and see if they coincide with your energy levels. i find that the new moon is deeper and more intense than the full moon, but isn't noticed as much because it's dark and not visible, but it is conjunct the sun, so very powerful. take a slower operating gear when the moon is new and see if being aware of it gives you any sign of synchronicity. later, billy (Email from Billy Name, June 22, 2009)

Billy didn't claim that Cage and Warhol discussed Vexations in relation to Sleep in that email. The discussion with Cage was about repetition and Warhol's silkscreens.

Henry Geldzahler compared Sleep to Vexations in an ad in the Village Voice, but didn't say that the concert influenced the editing of the film: 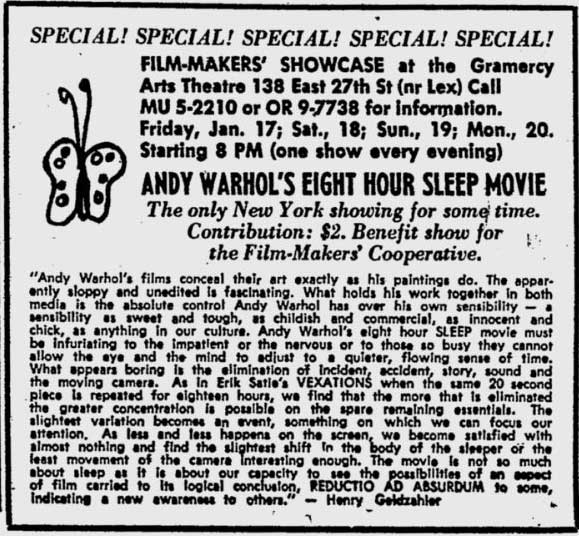 Geldzahler writes, "As in Erik Satie’s Vexations when the same 20-second piece is repeated for eighteen hours, we find that the more that is eliminated the greater concentration is possible on the spare remaining essentials. The slightest variation becomes an event, something on which we can focus our attention. As less and less happens on the screen, we become satisfied with almost nothing and find the slightest shift in the body of the sleeper or the least movement of the camera interesting enough."

The subject of Sleep, John Giorno, claimed that during what he refers to as the "premiere" of the film, Vexations was played on a tape recorder, but only for the first screening on January 17, 1964. In his memoir, Great Demon Kings, published after his death, Giorno wrote that Henry Geldzahler asked what the soundtrack for the film would be a week before its "premiere," and gave Andy a cassette of Vexations which he describes as "a bootleg copy made by someone in the audience." (p. 69) According to Giorno, "The tape was played on a small cassette recorder at the edge of the stage," and that Geldzahler "sat in the front row for the entire premiere." He then notes that "In his piece for The Village Voice introducing Sleep, he [Geldzahler] wrote...." and then quotes from the ad that appeared before the premiere.

Giorno's recollection is undependable. He doesn't mention the Vexations tape in a chapter he devotes to the making of Sleep in an earlier book, You've Got to Burn to Shine." In that book he also claimed that Warhol began filming Sleep on Memorial Day weekend in May 1963. According to the second volume of the film cat. rais., he later revised the date to July 10, when confronted with unreleased film footage that Warhol made of him. (The Films of Andy Warhol Catalogue Raisonne 1963 - 1965, p. 473 fn 14)

It leaves open the question of which came first - Giorno's recollection or the Tate event (in which he participated). It is not unusual for problems of memory to assert themselves in Warhol related interviews. Is the person actually remembering an event or recalling the event as it has been told in Warhol biographies or other texts?

There are no other texts that I am aware of which mention that a recording of Vexations was played at the New York premiere of the film, although the film cat. rais. does note that "At some of these screenings the film was accompanied by live radio, as recommended by the Film-Makers' Cooperative catalogue..." (p. 46).

By "premiere" Giorno is talking about the New York premiere of the film. He does not seem to be aware that ,according to the film cat. rais.,"the first public screening of Sleep was held in December 1963 during the Cinematheque Royale de Belgique's third Experimental Film Festival at Knokke-le-Zoute. where Warhol's film became caught up in the fracas surrounding Jack Smith's notorious film Flaming Creatures (1962-63). At a midnight sidebar screening of Sleep there on New Years' Eve, Jonas Mekas and Barbara Rubin 'planted a print of Creatures between the reels of Sleep, and were endeavouring to get it on the screen when a festival executive entered and pulled out the projector plug.' In the resulting frenzy, the electrical power was temporarily turned off... Under the circumstances, it seems unlikely that Sleep was shown in its entirety, if at all, in Belgium; but other European screenings of the film were successfully completed during 1964 as part of Mekas's traveling International Exposition of New American Cinema.... In the United States, Sleep premiered at the Gramercy Arts Theatre in New York on January 17, 1964, in a version that differed slightly from the one that toured Europe in 1963-64. (p. 44)

There is also a question as to whether Andy Warhol attended the performance of Vexations and how long he stayed. George Plimpton recalled a conversation with Warhol saying that he attended the whole concert, but according to the the New York Times, it was an actor named Karl Schenzer from The Living Theatre's production of The Brig who was the only person who sat through Vexations in its entirety.

An earlier version of this essay is available on request or at: "Notes on John Cage, Erik Satie's Vexations and Andy Warhol's Sleep." See also "When did Andy Warhol meet John Cage?"