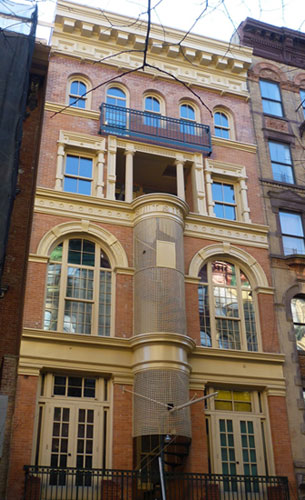 Home of the Fortune Theatre at 62 East 4th Street

In an attempt to generate some fast money, from 25 June to 5 August 1969 Andy rented the Fortune Theater on the second floor of 62 East Fourth Street and put on a series of male porno films. Gerard Malanga was in charge of the operation and the paperwork was done under his name and company, Poetry on Film. The hardcore house was called Andy Warhol's Theater: Boys to Adore Galore. Renting the dilapidated cinema was Morrissey's idea, as was the admission of five dollars, more than double the price of watching the same ten-minute loops on Times Square. Gerard Malanga managed the theatre and ran the music behind the silent reels; co-managing the venture and taking tickets was Jim Carrol [sic], who wasn't sure if his new job 'was a promotion or a demotion from Studio della Warhol.'

'Little Joe' Dallesandro, in addition to running the projector for several weeks, replacing his brother who was in Bellevue, according to Carrol, was also 'making a nice piece of change for himself by taking the wealthy swills of our clientele into a small sofa-filled room beside the projection booth and packing their fudge for them for prices only a true superstar could demand.' Jim briefly considered reporting Joe to Paul, but quickly realized that he too could make a nice piece of change by taking a percentage off the door.

In spite of the inflated price of tickets and the complaints of a few customers who attended expecting to see Andy Warhol's films, the porn-movie house was a success, particularly on Tuesdays and Thursdays, when the features were changed and the 150-seat cinema was packed. On a good night they could take in $1,500, though Morrissey, who dropped by punctually after the last show each night to collect the bag of money, quickly began to suspect that Carrol's uncharacteristic possession of pocket money and Gerard's fancy new wardrobe were being skimmed of the proceeds. Malanga pocketed $2,000 for his six-week stint, a considerable improvement over the $40 a week he was getting at the Factory. Carrol was taking out $200-300 -- on a good night. His justification: Andy and Paul were 'making out like bandits on this layer of obscenity.' In fact, after the 4,800 in rent Andy had to put out for the theatre and the various hands in the till, he realized little profit. When plainclothesmen started sniffing around, he closed the venue. (LD325/326)

Village Voice ad, 19 June 1969 announcing the opening of the film series as 25 June

The ad in the following issue of the Village Voice listed the films being shown, misspelling Gerard's last name:

The blurb on the left of the ad begins by asking "15,000,000 Homosexuals in America?" It continues "FACT: According to police records and statistics compiled by health officials and doctors - every 6th man in America today is a homosexual." It ends with the "different drummer" quote by Henry David Thoreau: "If a man does not keep piece with his companions, perhaps it is because he hears a different drummer. Let him step to the music he hears, no matter how measured or far away."

By July 17, the series of films was being referred to as "Gerard Malanga's Movie Mag" and by the 24th of July, "Gerard Malanga's Male Parade." A quote by Gregory Battcock appeared on ads for both programs (the second and third) which referred to the films as "anti-art statements" that deserved "comparison with Godard and Warhol..."

The final ad for the films at the Fortune appeared in the 31 July issue of the Voice with a program called the "Male World."