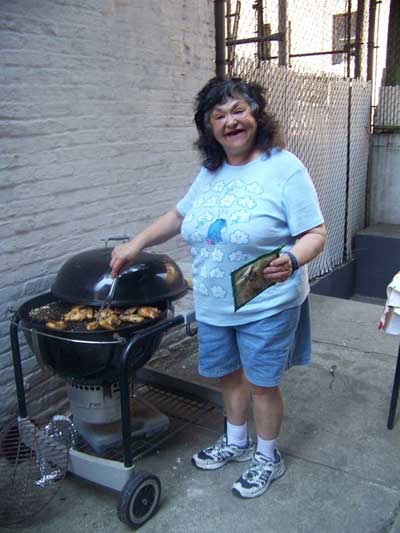 Geri Miller played the stripper in Trash. The following article about her appeared on the Observer website on 9 September 2008. (The above photograph is from my personal files. gc.) An earlier interview with Miller in Interview magazine can be found here.

I was limping around the sticky town looking for a pair of Sperry topsiders because the cheap sneakers I had bought were giving me blisters. At Union Square, secretly eyeing Filene's Basement, I decided to spend my limited disposable income on flowers instead of raiment, so I headed West to Chelsea Market.

On the crosstown bus I sat down next to a little fat woman who immediately asked me for change. I said if you want change, vote for Obama. I thought that was clever, but she was voting for McCain even though I pointed out that if he had been a decent pilot he might never have had to spend face time with the Viet Cong. (He crashed five U.S. Navy planes in all, a nice chunk of our taxes.)

But I gave her a dollar anyway, and it was like putting money in a talking machine. She just wouldn't stop chattering; she told me she was possibly related to Charlie Chaplin and the Queen of England (based on her father's gait and her mother's accent), and then she said she had been in two Andy Warhol films, but they wouldn't pay her even though you can buy the films (Flesh and Trash) at Kim's Video, so-called because it's owned by a Korean named Kim. Then she gave me detailed instructions on how to get to Kim's video store by bus, which involved a number of transfers. She said she had called Paul Morrissey a hundred times but couldn't get any money out of him, reciting his phone number and address until I felt I had it memorized. I asked her name and she said Gerri, and in a moment of trivia intuition I connected the degrees of separated and said, "Oh, are you Gerri Miller, the famous go-go dancer who could make your breasts spin in opposite directions when you danced?" And she squawked really loud, "Yes! That's me. The only professional in both those films!" No argument there.

She was impressed that I guessed who she was, and so was I. The bus driver was rolling his eyes like Hattie McDainiel as we cruised along 14th Street, Gerri telling me how well she got along with Negroes but could never vote for one. This crazy old gal was part of my history. I had actually seen her do her act at a wild loft party in Soho when I first arrived here about 30 years ago. All I remember about the party were the great puffs of dust squirting up from between the vibrating floorboards as a hundred people danced like maniacs. And I never forgot how great it felt to be here then, i the hear of the heart of things. But that gossamer stripper looked quite different from this toothless old Republican. She got off the bus at Ninth Avenue, heading for 15th Street and what she assured me was "the best butcher shop in town." I watched her waddle off, an utterly authentic New York treasure. To paraphrase a cliché, we shall not see her like again.