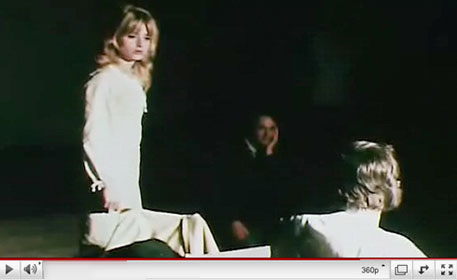 Michael McClure watching a rehearsal of The Beard, 1967 from a KPIX-TV documentary on the Haight Ashbury, San Francisco (click to play or go here.)

"Michael McClure's The Beard is a mysterious piece of work, for while its surface seems simple, repetitive and obscene, there is an action working which is dramatic and comic at once, and the play emits an odd but intense field of attention, almost like a magnetic field, almost as if ghosts from two periods of the American Past were speaking across decades to each other, and yet at the same time are present in our living room undressing themselves or speaking to us of the nature of seduction, the nature of attraction, and particularly, the nature of perverse temper between a man and a woman. Obstinacy face to face with the sly feint and parry all in one, the repetitions serves almost as subway stops on that electric trip a man and a woman make if they move from the mind to the flesh. That mysterious trip, whose mystery often resides in the dilemma of whether the action is extraordinarily serious or meaningless. It is with these ambiguities, these effervescences, that The Beard plays, masterfully, be it said, like a juggler."

Michael McClure's play, The Beard, was first performed in San Francisco in December 1965. Warhol's film version of the play was shot by May 1966.

The play consisted of two characters - Billy the Kid played by Richard Bright and Jean Harlow played by Billie Dixon. Bright later went on to appear in the Godfather films and to play character roles in television series such as The Sopranos. He died in 2006 after being hit by a tour bus in NY. (The driver of the bus didn't realise that he had hit Bright until he he got to the Port Authority and was told about the incident.) It's unknown what happened to Billie Dixon. She won an Obie in 1968 for her performance in a production of The Beard that was directed by Rip Torn who won an Obie for Distinguished Direction. Andy Warhol's film version of the play starred Gerard Malanga and Mary Woronov.

The Blossom, or Billy the Kid

McClure had written a previous play which also featured Billy the Kid in the title - The Blossom, or Billy the Kid with Alan Marlowe playing "The Kid" and sets designed by George Herms. (Herms later did photographs of Warhol star Freddie Herko that were included in Diane di Prima's Freddie Poems after Herko committed suicide.)

First edition of The Blossom, or Billy the Kid

The Blossom, or Billy the Kid was performed at Diane di Prima's Poets' Theater in New York. Michael McClure was living in San Francisco at the time.

"... Diane di Prima had started a Poets' Theater in New York with Alan Marlowe and she put on what was truly my first play - a play called The Blossom. or Billy the Kid... Diane was in New York doing plays by LeRoi Jones and plays of mine and it was a real thrill to know that those plays were being done. At that time we were so broke... I couldn't even get to New York and see them... The artist George Herms did the films of it, did stills of it, did the set for it and he brought me back complete word of it and brought me back some footage of it... I had to go to some extreme state to be able to write that play. I became an authority on the Lincoln County range war... Billy the Kid is famous for his actions in the Lincoln County range war in Lincoln, New Mexico. I became a minor authority on the Lincoln County range war till those characters seemed to be alive in my own consciousness... " (MC)

MIchael McClure's next Billy the Kid play - The Beard - actually started out as a poster.

"In 1964 I was coming back from a trip to Los Angeles and I had a copy of Ring magazine, a boxing magazine at the time, under my arm... I'd seen Norman Mailer in New York, I think I met Norman with Allen Ginsberg as a matter of fact, and I was interested in Norman's interest in boxing. So here I was with a copy of Ring magazine and I'd been noticing boxing posters and even gone to a boxing match... and I'd been, particularly... interested in boxing posters [rather] than boxing because there was a form for the boxing poster at that time. So here I was on the airplane with a copy of Ring magazine under my arm and a light bulb went off in my consciousness just like they show in the comic strips... and inside of the light bulb or coming from the light bulb's blaze was this poster - a boxing poster. And I looked at it in my consciousness and boxing poster was in beast language and the two characters on the poster were Billy the Kid and Jean Harlow. the two boxers were Billy the Kid and Jean Harlow....

I got off the plane, got in a cab, took the cab back to my place in the Haight Ashberry and there in the corner drugstore was a boxing poster in the window. So I had the cab driver stop. I went into the liquor shop and got a good look at the boxing poster, got a look at the back of the boxing poster and saw that it was done by the Telegraph Press in San Francisco... The next morning I got up early and I phoned Telegraph Press... I said my name is Michael McClure and I wonder if you would do a poem poster. He said sure kid just bring it on down we'll do it... So I got the head shot of Billy the Kid... I got a shot of Jean Harlow... I took it down to Telegraph Press." (MC) 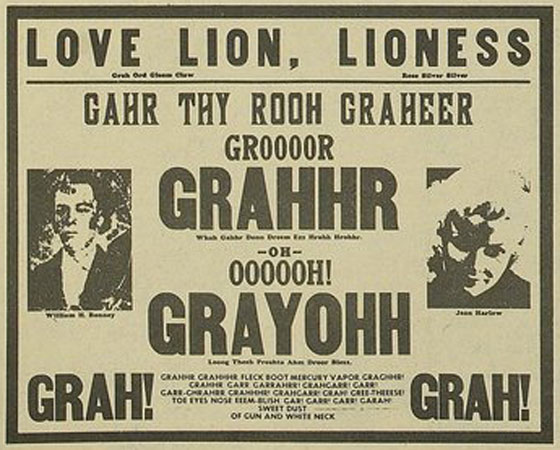 McClure put the posters up around New York and distributed them to friends (including Kenneth Anger) along with fake boxing match tickets that he had also printed up.

"I put the poster up on fences, windows, and in liquor stores where boxing posters would be, and put one up behind my head in the room I worked in at the time, which overlooked the bridge and the ocean. I could feel the presence of Billy the Kid and Jean Harlow broadcasting from the beautiful poster to the back of my head out towards the ocean. They began enacting the play and I began typing it up. They’d say a few pages, I just typed it. I thought it was a nature poem about mammal sexuality and mammal love. It could have been a tantric ritual." (MMI) 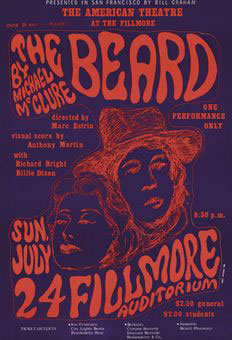 McClure's "nature poem" evolved into a play - The Beard. It was first performed by the Actors' Workshop in San Francisco on December 18, 1965 at the Encore Theater. The production was reviewed by Michael Grieg in the San Francisco Chronicle who referred to it as the "most effectively upsetting and creatively stimulating work by a local writer that the Workshop has ever presented." (EV40)

"By sheer chance I met Harold Pinter. He asked me if I was writing plays. I said yes. He recommended the play to the Actors Workshop. The Actors Workshop got one look at the play and sent it into the bottom drawer of the filing cabinet in the back of the sub sub basement... and a young director found it down there and said that was the play he wanted to do... We finally did one performance at the Actors Workshop - they were supposed to give us more but they got real nervous..." (MC)

More than six months after the initial production of the play, it was presented by Bill Graham at his rock venue, the Fillmore Auditorium, on July 24, 1966. Although the poster only has a single performance date, a second planned performance was cancelled after a warning from the police according to McClure.

...and then Bill Graham at the Fillmore Auditorium said he'd like to do it... Then Graham cancelled the second performance and the guy playing Billy the Kid went to Graham and said why and Graham had had a warning from the police who said if it was done a second time they were going to bust him and take the Fillmore license away... so anyway we took it over to the Committee Theater which was an avant garde theater..." (MC)

The Committee was an improvisation group who performed in a 300 seat venue at 622 Broadway which opened on April 10, 1963. Both the group and the venue were referred to as "The Committee." On the night of August 8, 1966 at The Committee the play was busted by the San Francisco police and the actors arrested. With the play banned in San Francisco, McClure and the cast formed a theater group and put on a production in Berkeley.

"... The Beard went to The Committee Theater in San Francisco, which was an experimental theater and comedy group. It was performed once on their off night, Monday, and it had a good audience. One of the members of the audience was a detective, actually wearing a massive overcoat. Under the overcoat was a movie camera, and the last part of the play was interrupted by the movie camera clicking, as they did in those days, as it filmed the finale of The Beard. The two brave actors [who played] Billy and Jean were hauled off to jail overnight, let out on bail, and charged with obscenity, which was serious at that time. One can't realize today how serious these charges were then.

The three of us, the two actors and myself, formed a theater group, and we called ourselves Rare Angel Productions... Richie, The Kid, set up a performance at the Flora Schwimley Little Theater in Berkeley." (FL210n.4) 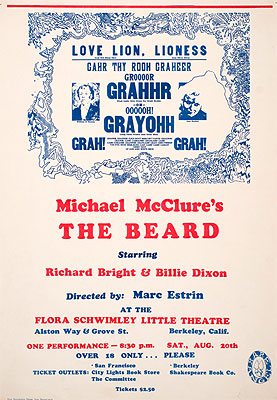 The Berkeley production was busted as well.

"... The Beard, now represented by the American Civil Liberties Union (after an offer of help from Melvin Belli), was presented in Berkeley by Rare Angel Productions to a capacity crowd, which included more than one hundred expert witnesses. These witnesses, invited by Rare Angel Productions, included Lawrence Ferlinghetti, Alan Watts, members of the academic community, members of the clergy, and photographers and tape-recording crews whose function was to record the police filming and taping of the performance. Seven members of the Berkeley Police and District Attorney's department arrived two hours before the performance, and began harassment of the actors, the author, and the stage crew. Malcolm Burnstein of the ACLU and the author forbade any taping or filming of the performance, a directive ignored by the police and D.A.'s office. The evening turning into a 'happening,' with the audience wildly cheering and applauding the attorneys the author, the actors, and denouncing the civil authorities. After the performance there were speeches by invited celebrities, and the police left quietly. It was not until five days later that Berkeley also brought charges of 'lewd and dissolute conduct in a public place." (EV40)

The San Francisco charges were dropped after about five months of litigation and the Berkeley authorities soon followed suit. On February 22nd The Beard opened at California Hall in San Francisco for a five night run. The first night was a benefit for the ACLU. 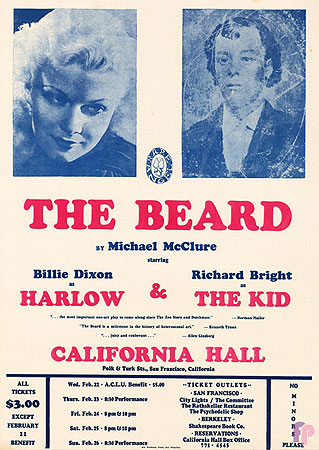 Andy Warhol's film version of The Beard was shot by May 1966 but by that time there had only been one performance of The Beard - the December 1965 performance at the Actors' Workshop in San Francisco. Warhol could not have seen that production as he wasn't in San Francisco at that time. He was busy discovering the Velvet Underground in New York who had opened at the Cafe Bizarre on December 15th. He may have shot his film version of the The Beard without ever having seen an actual production of it.