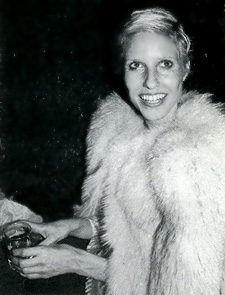 "I've been a go-go dancer, a stenographer, an actress, a comedian, a tap dancer, a dance teacher, a film critic, a maid, a designer, a fashion model, a singer, a publicist, a journalist, a computer operator. I have appeared on national television. I have collected endless unemployment. I have worked, wage-slaved, struggled and triumphed and lost." (From Tinkerbelle's unpublished book about her life on the nightclub circuit, Sometimes a Somebody.)

Known for her acerbic wit, Tinkerbelle (sometimes referred to as "Tinkerbell") became a regular contributor to Andy Warhol's Interview magazine in 1970. A friend of Tinkerbelle recalls:

"Tinkerbelle's real name was Jeri Lee Veronica Visser. She attended Rye High School, Rye, NY and graduated in 1963. She was brought up by her widowed father and a guardian named Grace. She was a devout Catholic and a poet, who put aside money every month to buy a set of 'wedding china' for her fairy tale future wedding to some unknown knight in shining armour. We used to sneak off to the Village whenever we could, by train. After we graduated we lived at the Hotel Earle, after which we got a shared apartment on West 14th Street and hung out in coffee houses on MacDougal Street like Feenjon, Reggio, Figaro, and when we had the money, Cafe Au Go Go to watch The Blues Project and Richie Havens. It was at Feenjon that we befriended Candy Cane (Darling), whom we both adored. One of the last times we saw Candy in the Village, she was already ill. She told us about the hormone injections and her wish to be perfect in front of the camera. She was already drop-dead gorgeous and we tried to talk her out of further treatments, but she was set upon being a Warhol superstar. That was the mid 1960s.

Jeri [Tinkerbelle] was a tragic figure with a sharp tongue and much intelligence - a virgin with bleached blond hair who dressed in tutu's and pink ribbons. I dressed in black. We made a striking pair and attracted a lot of attention, not all of it good. Jeri started to sleep around a bit but in all innocence. She always went to church afterwards to confess. She was an innocent soul for a while until she started attending "elite" parties and adopted her Tinkerbelle persona. She needed the fame that her association with The Factory gave her eventually - brief as it was. She became a bit of a shrew, using her wit to diminish other people. We grew apart." (AO)

In addition to nightclubbing and writing for Interview during the 1970s, Tinkerbelle began appearing regularly on Anton Perich's cable television show in 1973 and soon became the weekly interviewer before going on to do a two-minute film criticism spot called "Tinkerbelle Goes to the Movies" for Newsweek Video - a TV broadcast division of Newsweek magazine. As a result of her success Newsweek began developing an idea for her own show, "Tinkerbelle's Parties." Producer John Peaslee recalls, "We were going to do a slicker version of Anton Perich. We shot dozen of parties. I felt like we went to every wonderful party in New York for two years."

Although the parties may have been wonderful the show wasn't working. Newsweek Video became discouraged about the project - Peaslee recalls that they shot "miles" of films which worked perfectly when "it wasn't slick but the minute it got slick we lost it." He also recalls that Tinkerbelle became increasingly "unreliable." According to Peaslee she "was demanding and petulant, arrived late, canceled tapings. She had trouble memorizing her two-minute scripts and often needed a dozen takes to get it right. To Newsweek her film reviews were a very small thing but in her mind it took on massive importance. It was almost like Marilyn Monroe coming to the set." (SS)

Tinkerbelle was fired from her Newsweek job in 1978. (SS) The year before she was fired, Studio 54 opened and she became a regular at the club. Her ex-boyfriend, Joel Kronfeld, later commented "Studio 54 was her downfall. She became absolutely addicted to the scene. It took the place of Anton Perich free-form, except there was no camera. Studio 54 became her camera, except this time it was eight in the morning before she went home to bed. It was a destructive, terrible, negative environment that played into her needs." She and Kronfeld split up after she took an overdose of pills and he had to call the medics to pump her stomach. After leaving Kronfeld she eventually became involved with an abusive alcoholic. (SS) After they split, she ended up in several short -lived dysfunctional relationships - in some cases very short-lived. An entry from Warhol's diaries from December 23, 1978, reads, "Talked to Tinkerbelle and she was saying how she makes out with everybody she interviews, that she was making out with Christopher Walken and that his wife was getting upset. She said she cut her arm falling on the glass from a skylight - she'd broken into a friend's apartment - she thought they had some drugs in there. I guess Tinkerbelle's really wild." (AWD191)

By 1980 Bob Colacello wanted to drop Tinkerbelle from Interview magazine. Warhol commented in his diary entry for November 10, 1980, "I was reading Interview and Bob really wants to drop Tinkerbelle but her interview with George Burns - who I think's had it - she somehow made very interesting. It's a good piece of writing and I think we should keep her. She gets Bob really upset, but she's one of our good writers." (AWD342)

In June 1982 Tinkerbelle moved in with Jane Fredericks who she had met through friends at Interview. She became involved in the downtown scene, wrote articles on a free-lance basis for various magazines including Vogue, Details and 212 and started to write a book about her life on the club circuit. In October 1985 Jane Fredericks asked her to leave, later explaining "I had wanted her to leave for two years. She was a combination mother and jealous friend, and she was rubbing me the wrong way." (SS)

Unable to afford her own apartment, Tinkerbelle stayed with friends and supported herself with temporary secretarial jobs. Feeling increasingly depressed she checked herself into Bellevue in mid-November 1985 - which she referred to as Tinkerbelle-vue. After leaving the hospital she began an short affair with a doctor who worked there. By January 1986 she was staying with a friend in an apartment on fifth floor of a building located at West 111th Street. On the morning of January 22nd she jumped to her death from the window of the apartment. She was 40 years old. Tinkerbelle had, in the words of Sylvia Miles, run "out of gas in the fast lane." Miles commented after Tinkerbelle's death, "when a person like that gets into the fast lane, there's no satisfaction on the other side of the road." (SS)