John Giorno: "Andy sort of got rid of me at the end of '64. I totally adored him and loved him. I didn't realize that I was the first superstar he was getting rid of - beause later he dumped all of the superstars one by one, they either died or he got rid of them - so I took it personally." (HA25) 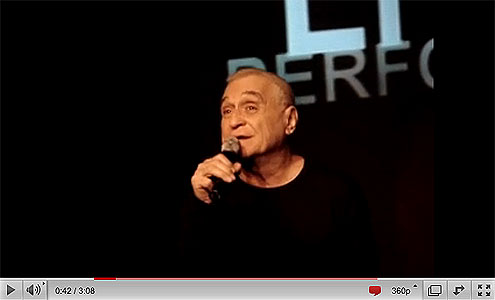 The star of Sleep, John Giorno, performs his poem Just Say No to Family Values in Barcelona in 2008

Sleep was not the first footage that Andy Warhol shot but it was the first film he shot which later became an underground classic. According to Gerard Malanga, Warhol had mentioned to him an idea for making a film of Brigitte Bardot sleeping for eight hours before Warhol actually owned a movie camera. (GMW39)

Although Sleep was billed as "Andy Warhol's Eight Hour Sleep Movie" in the Village Voice (see "Jonas Mekas and the Film-Makers' Cinematheque," p. 3), the MoMA Warhol film rental list indicates that it lasts 5 hours and 21 minutes. Sleep was edited by looping some of the footage. According to Popism, Warhol " hadn't actually shot that much." This was partially due to the limitations of his Bolex movie camera which could only shoot 3 - 4 minute lengths of film at a time. Gerard Malanga has said that the film lasts more than 5 hours and 21 minutes. According to Malanga, "Sleep runs approximately six-and-a-half hours of equivalent shooting time. Andy duplicated an additional ninety minutes from an equal ninety-minute section of the film to stretch it out to eight hours to approximate the scientifically accepted length of time for normal sleep." (GMW39) Although Malanga's comment and Popism implies that the footage was looped to give the illusion of a continuous sleeping experience, the repetitive editing is noticeable in the film. It is as much a film about the concept of "time" as it is about repetition and the imperfection of Warhol's repetition. The noticeable cuts in the editing of the film are retained, just as the mis-registrations of Warhol's silk screens are retained.

As usual when discussing his projects, Warhol understated the actual amount of thought and planning that went into Sleep. Callie Angell notes that "'Storyboard' drawings found on the original 100-foot-film boxes for Sleep indicate that Warhol experimented with a number of diffferent camera styles and complex editing techiniques - including a hand-held, moving camera and multiple shots on each roll - before settling on his trademark minimalist style of a single shot continuing over a full-length camera roll. The final editing of Sleep is a complex montage of may shots of portions of Giorno's body..." Angell notes further that the drawings on the film boxes were made not by Warhol but by the editor of SLEEP, Sarah Dalton. (FAW10) 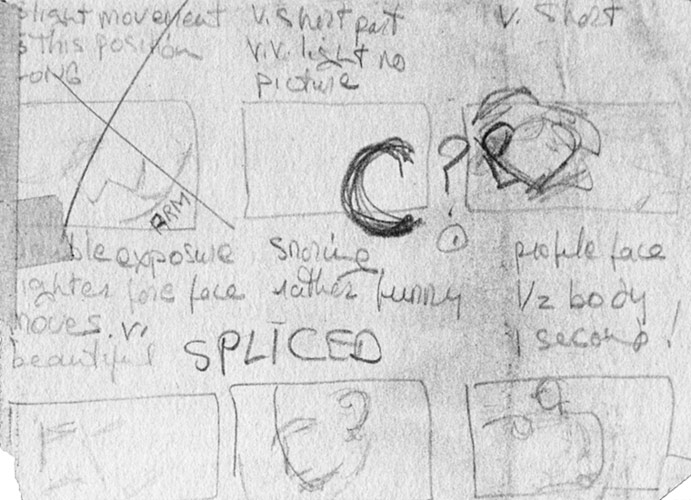 Although at least one writer has claimed that Warhol "was inspired to complete the film with a new repetitive editing structure" after attending a performance of Eric Satie's Vexations, it is unlikely - see "Notes on John Cage, Erik Satie's Vexations and Andy Warhol's Sleep."

According to Angell, "In July 1963, just after he had purchased his 16mm Bolex, Warhol asked his friend, the poet John Giorno, if he could film him sleeping, and began shooting 100-foot silent rolls in Giorno's apartment that summer." (FAW11) John Giorno, the star of Sleep, recalled Warhol asking him on Memorial Day (30 May 1963) weekend whether he could film him sleeping. The previous month, Warhol had attended a dance performance (29 & 30 April) by Yvonne Rainer in which one of the dances in the solo section of a dance piece by Rainer called Terrain was titled Sleep. Although there is no evidence that Rainer's piece gave Warhol the idea to make a film with the same title, Warhol did attend the performance ofTerrain, according to Popism. The performance is referred to as "beautiful" in Popism.(POP51/JD115)

Sleep was shot in Giorno's apartment whom Warhol was having a sexual relationship at the time, according to Giorno. On Memorial Day weekend of 1963, Giorno woke up to find Warhol watching him sleep and Warhol asked him if he'd like to be a movie star.

On Memorial Day weekend in 1963 we went away for a few days and I woke up in the night to find him staring at me - he took a lot of speed in those days. That's where the idea for the movie came from - he was looking for a visual image and it just happened to be me. He said to me on the way home: "Would you like to be a movie star?" "Of course," I said, "I want to be just like Marilyn Monroe."

He didn't really know what he was doing; it was his first movie. We made it with a 16mm Bolex in my apartment but had to reshoot it a month later. The film jumped every 20 seconds as Andy rewound it. The second shoot was more successful but he didn't know what to do with it for almost a year.

The news that Warhol had made a movie triggered massive amounts of publicity. It was absurd - he was on the cover of Film Culture and Harper's Bazaar before the movie was finished! In the end, 99% of the footage didn't get used; he just looped together a few shots and it came out six hours long. (GJG)

When Giorno mentions that he and Warhol went away for a few days on "Memorial Day 1963," he may be referring to a trip to Old Lyme, Connecticut where Warhol shot some footage that pre-dates Sleep with a movie camera owned by the father of Wynn Chamberlain's girlfriend, Sally Stokes, who later married Chamberlain. (See Wynn Chamberlain.)

Warhol first met John Giorno at Warhol's first pop show at Eleanor Ward's Stable gallery in November 1962. (GJG). Although Giorno was working as a stockbroker at the time, he would later quit to concentrate on his poetry. He started the telephone service, Dial-A-Poem in 1968 with sponsorship from the Architectual League and in 1970 he set up a spoken word recording company with $30,000 he received from selling a suicide painting that Warhol had given him. At various times in his life, Giorno was also involved with Jasper Johns, Robert Rauschenberg, William Burroughs and Brion Gysin. 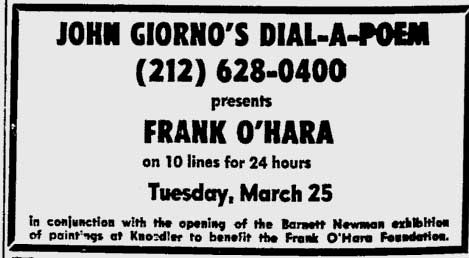 Although Giorno's comments indicate that Warhol asked him to star in Sleep on Memorial Day weekend, 1963, the film was not actually shot until July. According to Gerard Malanga it was in July that Warhol purchased his first movie camera - a Bolex. In a later interview, Giorno remembered the night that Warhol and himself left a party they were attending in order to set up the camera and tripod.

I was sitting on a seventeenth-century Spanish chair as he checked out where to put his tripod and lights and suddenly Andy was on the floor with his hands on my feet, and he started kissing and licking my shoes. I had always heard he was a shoe fetishist. 'It's true!' I thought with a rush. 'He's sucking my shoes!' It was hot. And I got some poppers to make it better. I jerked off while he licked my shoes with his little pink tongue and sniffed my crotch. It was great. Although Andy didn't come. When I wanted to finish him off, he said, 'I'll take care of it.' (L&D177)

It's unknown how truthful Giorno's account of that evening is.

The New York premiere of Sleep took place on January 17, 1964 at the Grammercy Arts Theater - a benefit screening for the Film-Makers' Cooperative. According to the New York Post, the screening was attended by only nine people - two of whom left during the first hour. (FAW10-1)

Later that year, Sleep became the first Warhol film to be shown at the Cinema Theatre in Los Angeles - an arthouse cinema that was part of the Art Theatre Guild, described by film scholar David E. James as "a national chain of twenty-nine theatres owned by Louis K. Sher." (DJM222) Sher would later go on to found his own distribution company, Sherpix, which distributed Warhol's Lonesome Cowboys and Flesh.

In the early 1960s the Cinema Theatre was one of half a dozen art houses in Los Angeles, part of the Art Theatre Guild, a national chain of twenty-nine theaters owned by Louis K. Sher. Twenty-three-year old Mike Getz, Sher's nephew and its manager, was supplementing the increasingly remunerative exploitation market with first-run exposure for the French New Wave and independent American features such as The Connection. Approached by John Fles, a local poet and critic who had for several years been screening experimental films from the National Film Board of Canada and the New York underground at the Unicorn coffeehouse on Sunset Strip, Getz agreed to allow him to begin midnight screenings at the Cinema Theatre. By this time, Fles had assembled an extensive mailing list, to which he announced the screening of two recently completed works, Stan Brakhage's Dog Star Man and Jack Smith's Flaming Creatures. Fles's mailer read, "October 12, 471 years ago, Columbus discovered America. Today you discover the New American Cinema!" The term "New American Cinema" had been current in New York for at least two years, and the midnight screenings at the Charles and Bleeker [sic] Street theatres in new York were sufficiently renowned in Los Angeles to attract to the Cinema Theatre a crowd estimated at five hundred by Arthur Knight, then a USC professor and occasional critic for the Los Angeles Times. (DJM222)

[See: "Jonas Mekas and the Film-Makers' Cinematheque" for a discussion of the screenings at the Charles and Bleecker Street cinemas.]

Filmmaker and scholar Thom Andersen attended the screening of Sleep at the Cinema Theatre and remembers it as being in June 1964. Although the cinema had midnight screenings of underground films, Andersen recalls Sleep starting at "about 6.45 pm." (TAR) Manager Mike Getz sent Jonas Mekas an account of the Los Angeles screening which Mekas printed in his "Movie Journal" column in the 2 July 1964 issue of the Village Voice:

Sleep was one of the films cited when Mekas' magazine Film Culture awarded Warhol the Sixth Independent Film Award in 1964. The award was announced in the Summer 1964 issue of the magazine: 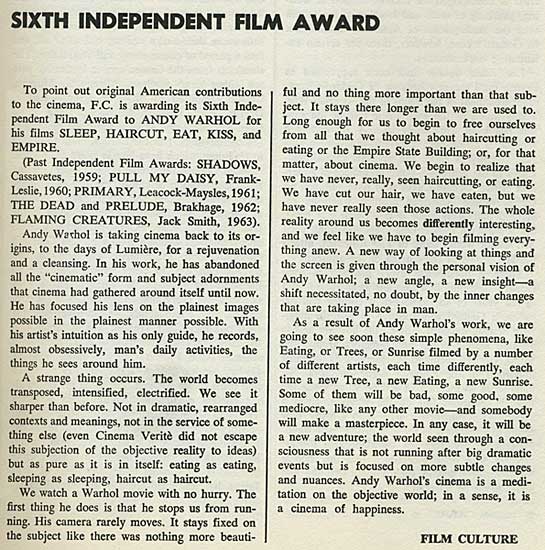 Andy sort of got rid of me at the end of '64. I totally adored him and loved him. I didn't realize that I was the first superstar he was getting rid of - because later he dumped all of the superstars one by one, they either died or he got rid of them - so I took it personally.

But then again, I'm also very thickheaded. When I get rejected, it's not my problem. I still saw him, at the opening of the Plexiglas of Sleep at Sidney Janis in the fall of '65, when Sleep was screened I was still asked to these occasional parties, and went to them. But a, at the end of '64 or beginning of '65, I met William Burroughs and Brion Gysin, and we became friends, as you know, for the rest of our lives.

So that started, and that world was completely different from Andy's. I mean parallel but completely unconnected. We lived in the Hotel Chelsea when he was filming Chelsea Girls, but it was like another part of the city, /We never ran into them in the halls of lobby while they were filming. And of course I got endless phone calls asking if i could try to get William to be in Chelsea Girls. And I said, "I'll see. I'll see. I'll ask."