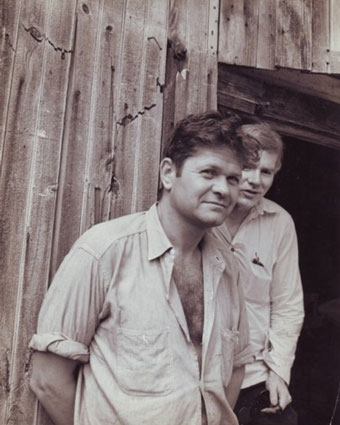 Wynn Chamberlain died in New Delhi on November 27th of heart failure. He was cremated on 1 December in Rishikesh on the banks of the Ganges.

Wynn is mentioned numerous times in Popism in which he's described as a Magic Realist painter. He accompanied Warhol, Taylor Mead and others on their infamous cross-country road trip to Warhol's second exhibition at the Ferus in L.A. (where Warhol also shot scenes for Tarzan and Jane regained, sort of...) and some of Warhol's earliest film footage was shot at Wynn's place in Connecticut. In addition to painting, Wynn also wrote a number of books under his full name - Elwynn Chamberlain - including Gates of Fire about three young Americans who smuggle a million hits of LSD into India. He also directed the 1970 film, Brand X.

Some of the film that Warhol shot in Connecticut, including footage of Wynn, was recently included in Exposed: Songs for Unseen Andy Warhol Films at the Brooklyn Academy of Music on 8 November 2014.

Here is the reference to the Connecticut property in Popism:

"I went out to Old Lyme, Connecticut, a lot of weekends that summer. Wynn Chamberlain was renting the guest house on Eleanor Ward's property and he had gangs of his friends out there the whole time... The second thing I ever shot with a 16-mm camera was a little newsreel of the people out there filming for Jack [Smith]." (p. 31-2)

Although Popism refers to the property as Eleanor Ward's, it actually belonged to a couple called "the Mallets," according to Wynn, He emailed me from Marakesh in 2011 just prior to coming to the U.S. for screenings of his 1970 film, Brand X. Apparently, he had not left Marakesh "in ten years" and was having severe health problems - "My spine is disintegrating, I have 3 slipped disks, 14 fractured vertebrae, Lumbar Stenosis and advanced Osteoporosis so am hoping they can glue me back together."

"For five summers I rented a farm house and studio barn from the Malletts, wonderful old Buddhist nudists.  Then in 1963 Eleanor showed up, rented the chicken coop and destroyed the peace. She co-opted the  Ice House for her guest house, planted a lawn over an old driveway and infuriated the Malletts by trying to take over the whole place. So you can imagine how irritated I get when people talk about the summer of 1963 and Eleanor Ward's property in Old Lyme."

He added that during a weekend that Warhol was there, Sally (his future wife) "brought her father's 1929 Bolex with her to record Jack Smith filming Normal Love, Andy borrowed it and thus began his movie career." According to Wynn, the Bolex "never worked again after that weekend."

Although Wynn went to Old Lyme "for five summers," he lived at 222 Bowery in Manhattan - in a building that became known as "the bunker" when William Burroughs lived there. Wynn's obituary in the New York Times mentions a "literary gathering" at his apartment which featured a reading by Burroughs: 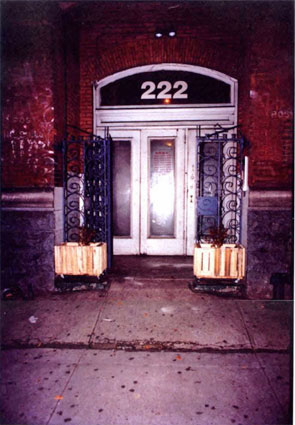 "In 1965, long before the Bowery in Lower Manhattan had begun its gentrifying ascent, the painter Wynn Chamberlain had a studio at 222, a building that now has a Green Depot store on the ground floor but was then in a derelict neighborhood, with a mission across the street.

On the evening of April 22, a Thursday, however, it became the center of hip, artsy New York when Mr. Chamberlain, who was best known at the time for painting poets in the nude, hosted a literary gathering that featured a reading by William S. Burroughs, the author of “Naked Lunch.”

The crowd of 130 people — including the pop artist Andy Warhol, the painters Larry Rivers and Barnett Newman, the composer Karlheinz Stockhausen, the poet and art curator Frank O’Hara, and the photographers Diane Arbus and Richard Avedon — was appreciative as Mr. Burroughs read, with his characteristic eccentric delivery, a futuristic short story. As The New York Times described it, he 'livened up his one-syllable-at-a-time reading with sudden bursts of dramatic activity, eventually ripping down a white-sheet backdrop and uncovering a painting of horrifying tarantulas.'

According to the 2014 biography of William Burroughs by Barry Miles, the event at Chamberlain's apartment happened on the 23rd of April. Miles gives a fuller description of the party:

On April 23, Burroughs read to 130 people at a party held at artist Wynn Chamberlain's top-floor loft at 222 Bowery, an address where he would himself live for several years in the seventies. He shared the stage with Shell Thomas, his old friend from the Beat hotel who read from his new novel Gumbo and sang old Methodist hymns in a Texas accent. Once again Bill found himself surrounded by the New York art crowd: Diane Arbus, Frank O'Hara (Burroughs never liked him), Larry Rivers, Marisol with a green bow in her hair, Larry Poons, Richard Avedon, Karlheinz Stockhausen, Barnett Newman, and Andy Warhol. Brion [Gysin] demonstrated the Dreamachine to the assembled guests. Bill ended his reading by tearing down a white backdrop to reveal a painting of horrifying tarantulas."

1965 was also the year that Wynn had a controversial solo show of his nudes at the Fischbach Gallery and the same year that he married Sally Stokes. The Fischbach Gallery exhibition, which opened on the 2nd of February, included his painting, The Poets Dressed and Undressed, with naked images of Frank O'Hara, Joe Brainard, Joe Le Sueur and Frank Lima. (David McCarthy, "Social Nudism, Masculinity and the Male Nude in the Work of William Theo Brown and Wynn Chamberlain in the 1960s," Archives of American Art Journal, vol. 49, nos. 1-2, 1998)

.By 1969 Sally and Wynn had moved from 222 Bowery to a new loft that belonged to the painter Alex Katz on Lower Fifth Avenue.

"Good lofts were extremely hard to find and the arrival of children had made Wynn's Bowery aerie with its flights of stairs and lack of neighbourhood facilities difficult. We jumped at Alex's generous offer. The loft - one flight above a restaurant called the Lotus-Eaters on Lower Fifth Avenue - consisted of a big front room used as Wynn's office/studio and behind it, a spacious living room, separate bedroom, plus a kitchen, bathroom and two sleeping lofts. We hung some of Wynn's bright paintings on the white-washed walls and furnished the living room with a white shag carpet, piles of colourful pillows and a long white sofa. Before long, it was bustling with actors and poets, photographers and hangers-on schmoozing and feeding on Wynn's charisma and my spaghetti." (Sally Chamberlain, "From Woodstock to Altamont," Five Dials magazine, No. 7 (London: Hamish Hamilton, p. 23)

Their flat became more of a commune than a family home because of all the "hangers-ons." Wanting a family home where they could bring up their children - Sally had given birth to fraternal twins, Sam and Sarah, in 1968 - and disillusioned by American politics and the fading of the peace and love ethos of the sixties, they moved to India at the urging of London art dealer Robert Fraser who was staying in India at the time. (Fraser was the person arrested with Mick Jagger for possession of drugs in 1967 - Fraser was charged with possession of heroin and eight capsules of amphetamine. He's the person with Jagger in Richard Hamilton's well-known painting Swingeing London.)

Sally later recalled their disillusionment when "the Woodstock euphoria began to fade" in the U.S.:

"... all too soon the Woodstock euphoria began to fade. In late '69 came the horrific images of Altamont, followed by escalating casualty lists and excruciating scenes from Vietnam...

By mid 1970, the zeitgeist was no longer on TV but on our doorstep. William Burrough's tarantula was here and running amok... Friends stagged in from peace rallies with blood streaming down their faces... others buzzed that killer heroin was flooding the city and federal agents were arresting people for small amounts of pot....

By October 1970 I felt like a passenger stuck in some grim departure lounge, longing to get out but unsure of what train to get on. One morning, I surveyed the kitchen area with fury - the hamper of dirty clothes, a wet load left in the washing machine and the sink piled with greasy dishes. you'd think some of our loft mates would occasionally wash their own clothes or dishes and not leave all the work for me. It was finally dawning on my why sensible people avoided communal living. I threw the wet load in the dryer and the dirty clothes in the washing machine, picked up a scrubbing pad and filled the sink with hot water. How could we get rid of the commune and be a nuclear family again?" (Chamberlain, p. 24)

After Wynn was mugged in New York they finally left for India. They remained in India until 1975 when they moved to California. They returned to India in 1983, later moving to Marakesh in Morocco, while the children made London their home.

During the past few years, Wynn's son, Sam, has been showing the film that Wynn directed, Brand X, at various festivals and museums including the Tate Modern in London in 2012 - which included a panel discussion with Wynn and Taylor Mead. The website for Brand X, which includes a short biography of Wynn, can be found here. The film is currently being restored and re-released by the Cineteca di Bologna.