By the time of Jerome Hill's death, Warhol had known Charles Rydell for a considerable time. According to Fred Lawrence Guiles, Rydell had been one of Warhol regular telephone conversationalists of the 1960s. Guiles suggests that Warhol's obsession with talking on the phone may have had to do with the fact that Warhol was taking pharmaceutical "speed," Obetrol. According to Guiles, "If he believed that his reality was 'half television' and not quite real, the Obetrols did not help except to screen out the humdrum element of his working life. He was also on the phone several hours every day talking to Henry Gleldzahler or the Duchess [Brigid Berlin] or Charles Rydell." (LB196) if Rydell was one of Warhol's regular phone mates, he may have been one of the unnamed "B's" in Warhol's Philosophy book.

Charles had also helped Taylor Mead, Brigid and her sister Richie when Jerome was still alive by giving them money and sometimes providing them with a place to stay.

Charles smiled as he recalled how a kind of 'Reaganomics' existed around the Factory. Andy never paid his film Superstars and players anything, so they were always in need of funds. Charles helped Brigid Polk with money and put her up at his small apartment at 20th and Park frequently. She and her sister Richie had their photos posted at the cash registers in Bloomingdale's, so when they were out of funds, they had to cadge meals and pocket change from Charles. He put up Taylor Mead on occasions and helped him out. So the system worked this way: Charles was being kept by the filmmaker and railway scion Jerome Hill, and Charles in turn often kept Brigid and Taylor. (LA230)

Warhol made reference to these "hand-outs" to Brigid in his diaries in 1978:

Brigid's down to 140 and looks good. Charles Rydell is staying at her apartment and she's so mean to him. She really is mean. He can't watch her TV, he can't put his feet up, he cant go to the bathroom. After everything he's done for her - I mean, he gave her handouts for years. (AWD264)

But Charles wasn't so kind to Brigid's short-term gay husband in the '60s. Guiles notes "Brigid Polk [Berlin] was married briefly to a man who preferred booze and other gentlemen to herself. He often wound up the night curled up asleep in front of Charles Rydell's door, but Charles rarely took him in unless it was freezing." (LB172)

After Jerome Hill's death, Rydell eventually returned to New York and appeared in some of Warhol's video projects such as Factory Diaries and Fight with Brigid Berlin.

As the seventies waned, Andy's reputation was in semi-eclipse. He began doing other things as well as art... This time he turned to TV rather than film. He thought it would be fun to do his own situation-comedy rather like The Bickersons, a quarrelsome couple in the mid-fifties that had a run of about two years on the radio and, more briefly, on television... He asked Charles Rydell to come out of his semi-retirement in the Hamptons, where he had retreated following the death from cancer of his lover Jerome Hill. He knew that Charles was always in some sort of dispute with Brigid Polk [Berlin], and he also knew that Charles was one of the mainstays in her life, keeping her afloat in difficult times. Andy saw their relationship as akin to that of the Bickersons.

He put Vincent Fremont in charge of pulling it together, and Ronnie Cutrone was asked to help out as well. Cutrone had missed out on the Bickersons because of his youth, but he remembered Jackie Gleason's The Honeymooners, in which the couple fights all the time, so he could relate to what they were doing. As Cutrone remembered it:

"Brigid and Charles were roommates and both of them were trying to diet, but neither of them could, and they were both cheating [on their diets], and they would fight and torture each other, about dieting primarily, you know, politics, whatever the situation called for. And every time Charles would get totally furious with her instead of going like, 'Alice, POW to the moon!,' he would grab this thing that was called the bull-worker, which was an exercise tool."

Charles recalled that the weapon was something like a baseball bat:

"I was in therapy at the time, and I was supposed to take this thing and whenever I got really angry, I would vent my anger on the mattress of the bed, pounding the shit out of it. Just total hostility... getting it out of my system."

They shot the series in various apartments, and there would be the people residing there drawn into the action, so the plot was very loose." (LB409-410)

Fight is catalogued in the Other Voices Other Rooms exhibition catalogue as:

It's described as "a brilliant and hilarious improvised attempt at distilling a couple's relationship (Berlin/Rydell's or Miles/Rydell's) down to their incessant needling and arguing." (OV02:13:00)

In 2010 there a special screening of Fight scheduled at The Warhol museum, with personal appearances by Brigid Berlin, Charles Rydell and Vincent Fremont.

In addition to appearing in Fight, Rydell also appeared in a Factory Diary during the 1970s known as Hotel Room.

The video is catalogued as the following:

This intimate diary shot by Warhol documents the afternoon antics of his friends Brigid Berlin, photographer Peter Beard and actor/writer Charles Rydell. Warhol's presence is a catalyst. Beard strips, puts his pants over his head and howls. Berlin fakes orgasms lying on the floor and makes tit prints in Beard's art book. Rydell takes a piss on Berlin's back while she is talking and the tape ends with Berlin literally pulling out her own hair. (OV01:27:00)

During the 1960s, Rydell was also the subject of three Warhol Screen Tests and had also appeared in some of Jerome Hill's films - The Sand Castle (1961) and Open the Door and See All the People (1964). He was also in Ron Rice's The Queen of Sheba Meets the Atom Man. This was in addition to his stage work. Callie Angell notes in the film cat. rais., "Rydell has been a professional stage actor and singer for many years; Warhol recalled having seen him with Kitty Carlisle in Lady in the Dark at the Bucks County Playhouse. He also appeared in the 1967 off-Broadway revival of the Rodgers and Hart musical By Jupiter, and sang on several recordings of old show tunes, Rodgers and Hart Revisited, Vol. 2..." (AD170)

Rydell also wrote, directed and produced a film called School Play. It was advertised in a 1971 issue of the Village Voice in a double bill with a film, Tits, made by the artist Larry Rivers. (BC170) 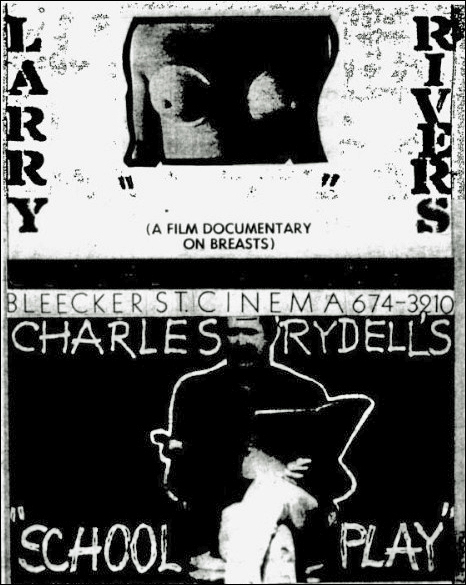 Ad in the October 7, 1971 issue of the Village Voice for a double bill of a "film documentary on breasts" by Larry Rivers, and Charles Rydell's School Play at the Bleecker Street Cinema.

Bob Colacello reviewed the screening in the October 28th issue of the Voice. 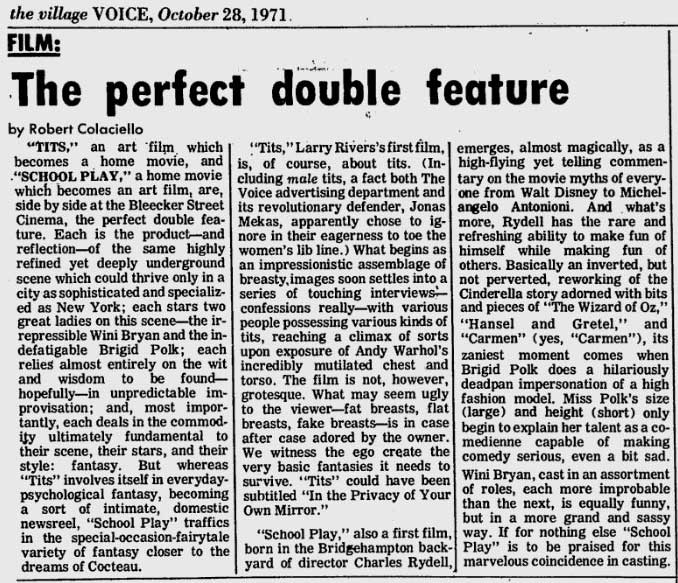 Larry Rivers was a friend of Charles Rydell. Rivers' involvement with the Warhol crowd has never been fully explored. He is mentioned several times in Popism: "Larry's painting style was unique - it wasn't Abstract Expressionist and it wasn't Pop, it feel into the period in between, But his personality was very Pop... " (POP13) When Warhol star Holly Woodlawn found herself in jail during the opening of Trash, it wasn't Warhol who bailed her out, it was Rivers. (See Trash)

Rivers also made videotapes of Rydell which, in at least one instance, also included Warhol star Taylor Mead and Sylvia Miles who appeared in Andy Warhol's Heat. Videos held with Larry Rivers' papers at the Fales Library which mention Rydell are described in the following way, all on 1/2 inch black and white tape, with sound:

Rivers interviews his mother as they drive to, and explore, Charles Rydell's Long Island home.

Robert Twig, Taylor Mead, Sylvia Miles, Rudolph and Charles Rydell discuss a film by Rivers called Four and a Half in which they all performed.

Tape begins with cuts between silent footage of Charles Rydell seeing off a departing Jerome and footage of Rydell discussing the scene. Followed by footage of swimmers in Rydell's pool and Rydell in discussion with Rivers about art and artists.

In 1975 Rydell also tried his hand at writing. He wrote a review of a Mark Reichert show at the David Deitcher Gallery in the February issue of Art Gallery magazine. His Bridgehampton home was featured in the December 1975 issue of House Beautiful magazine.

The last film that Rydell appeared in was Union City (1980) which starred Debbie Harry and included Taylor Mead in the cast. (AD170)