Duchamp's urinal at the Society of Independent Artists exhibition

Arshile Gorky arrives in the U.S.

First exhibition of the Société Anonyme

The term "Abstract Expressionism" is first used in the U.S.

Artists hang out at Romany Marie's and the Jumble Shop

Surrealism at the Julien Levy Gallery

The first concentration camp in Germany is announced

The Artists' Union is formed

The Section of Painting and Sculpture is launched

"Abstract Painting in America" at the Whitney

The WPA is launched

The Federal Art Project is launched

"Fantastic Art, Dada and Surrealism" at the Museum of Modern Art

3. Surrealists flee Europe for the U.S. during World War II

Stanley William Hayter arrives in the U.S. and uses a "drip can."

Gordon Onslow Ford arrives in the U.S. with "poured canvases."

Mark Rothko, Adolph Gottlieb, Meyer Schapiro and others start the Federation of Modern Painters and Sculptors

Chateau Hoping for a Visa

The April 1942 issue of View magazine featuring André Breton's article "The Legendary Life of Max Ernst: Preceeded by a Brief Discussion on the Need for a New Myth."

Carl Jung's Essays on a Science of Mythology is published

Peggy Guggenheim and Max Ernst arrive in the U.S. Arshile Gorky's solo exhibition at the San Francisco Museum of Art

Pearl Harbor. Artists in Exile at the Pierre Matisse Gallery

5. Art of This Century

"The First Papers of Surrealism" exhibition

Art of This Century opens

Jackson Pollock's first solo show at Art of This Century

Artists hang out at the Waldorf Cafeteria

Arshile Gorky works on The Liver is the Cock's Comb

Mark Rothko's first solo show at Art of This Century

Jackson Pollock moves to the Springs 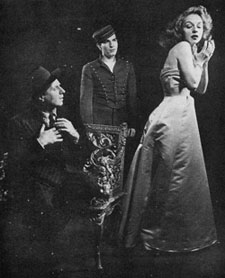 Publicity still from the Broadway production of Jean Paul Sartre's play, No Exit, at the Biltmore Theatre with a cast featuring RUTH FORD (r) - the sister of View editor, CHARLES HENRI FORD - and a set designed by Frederick J. Kiesler who also designed Peggy Guggenheim's Art of This Century gallery.

Arshile Gorky's paintings are destroyed in a fire

Arshile Gorky is diagnosed with cancer

Arshile Gorky has a colostomy

Jackson Pollock begins the Accabonac Series and Sounds in the Grass Series, including Shimmering Substance

No Exit on Broadway

Last photo of Arshile Gorky taken at the Glass House by Wilfredo Lam in July 1948, clearly showing the traction device he had to wear as the result of a crash in a car driven by his art dealer, Julien Levy.

Only issue of Possibilities is published

Mark Rothko's "The Romantics were Prompted" appears in Possibilities

Gorky's wife has a secret rendezvous with Matta

The Subjects of the Artist School opens

Life magazine asks if Jackson Pollock is the greatest living artist in the U.S.

"Black or White" paintings at Kootz

Jackson Pollock has a car accident

Photograph of Jackson Pollock and Ruth Kligman taken on the day of Pollock's death by Edith Metzger, the passenger in Jackson's car who was also killed in the same car accident that killed Pollock

Jackson Pollock drives on the wrong side of the road

Time magazine refers to Jackson Pollock as "Jack the Dripper"

The death of Jackson Pollock

Allan Kaprow at the Hansa Gallery

The Museum of Modern Art becomes the first U.S. museum to purchase a painting (Abraham) by Barnett Newman

Mark Rothko writes his will

Allan Kaprow's 18 Happenings in Six Parts at the Reuben Gallery

"Sixteen Americans" at the Museum of Modern Art

Poster for Claes Oldenburg's "The Store" (Although the poster gives the date of "The Store" as December 1 - 31, it was extended through January 1962)

The times, they were a-changin'

First Situationist exhibition in the U.K.

Mark Rothko at the Museum of Modern Art

12. Pop Art and a New Abstraction 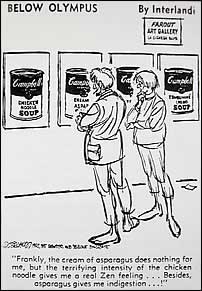 Mark Rothko agrees to do the Harvard Murals

Willem de Kooning has an affair with Mera McAlister

Life magazine reports on Pop Art - "Something New is Cooking"

Barnett Newman asks "Who's Afraid of Red, Yellow and Blue?"

Mark Rothko has an aneurysm

Willem de Kooning retrospective at the Museum of Modern Art

New American Painting and Sculpture: The First Generation at The Museum of Modern Art

The Mark Rothko Foundation is incorporated

Mark Rothko has a party

Willem de Kooning at the age of 55 (Photo: Walt Silver)

The Rothko Chapel is dedicated

Harold Rosenberg dies of a stroke

Frank Lloyd is sentenced in the Rothko case

Lee Krasner retrospective at the Houston Museum of Fine Arts

Club organizer Philip Pavia dies at the age of 94

The Origins of Expressionism (excerpt)

The WPA (Works Progress Administration) and the Federal Art Project

The Ten: Nine Artists in Search of a Cause

Excerpt from "Avant-garde and Kitsch" by Clement Greenberg

Edward Alden Jewell vs. The Federation of Modern Painters and Sculptors

The Portrait and the Modern Artist: Adolph Gottlieb and Mark Rothko

Excerpt from "The Plasmic Image" by Barnett Newman