Prior to purchasing his own camera and filming Sleep, Warhol had shot some footage in Old Lyme, Ct. where he sometimes spent the weekend. (CH230311) He used a 1929 Bolex owned by the father of Wynn Chamberlain's current wife (since 1965), Sally Stokes, to shoot at least some early footage in Old Lyme. (WC210311) Diane di Prima recalled Warhol being in Old Lyme during the shooting of Jack Smith's Normal Love in mid-August. Warhol, via Pat Hackett, referred to Old Lyme in POPism.

"I went out to Old Lyme, Connecticut, a lot of weekends that summer [1963]. Wynn Chamberlain was renting the guest house on Eleanor Ward's property and had gangs of his friends out there the whole time. Once, Eleanor visited the guest house and got really, really upset when Taylor Mead came into the living room dressed up in drag and announced to her, 'I'm Eleanor Ward. Who are you?'

Jack Smith was filming a lot out there, and I picked something up from him for my own movies - the way he used anyone who happened to be around that day, and also how he just kept shooting until the actors got bored... The second thing I ever shot with a 16mm camera was a little newsreel of the people out there filming for Jack." (POP32)

Warhol/Hackett's description of the footage as "the second thing I ever shot" is inaccurate as there is footage from Connecticut that pre-dates Sleep. (CH230311) It is also not true that Wynn was renting from Ward. The property was actually owned by a Buddhist couple - the Malletts. Wynn had rented his summer place from them for a few years prior to Ward who rented their chicken coop in 1963, as well as taking over the ice house as her guest house. (WC210311)

In the above quote the two people that Warhol refers to are: 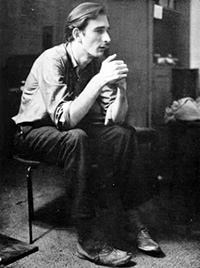 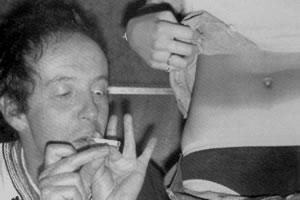 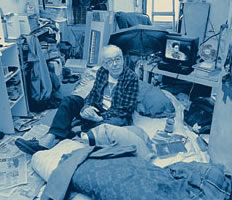 Jack Smith was a controversial underground filmmaker who appeared in several Warhol films including Batman Dracula (1964), Camp (1965) and Hedy (1966). Warhol used many of Jack's actors in his own films - including transvestite Mario Montez, Louis Waldon and Frankie Francine. Smith died of AIDS in 1989.

Taylor Mead was an underground poet and actor who had been involved in the Beat movement in the 1950s. Unlike most Warhol stars whose careers were short-lived, Mead's career in Warhol films lasted from 1963 until 1968 - with a short break in 1965 when he was in Europe.

Taylor Mead was born on December 31, 1924 to a wealthy family in Grosse Point Michigan. He studied drama at the Pasadena Playhouse in Southern California and dropped out of various universities before hitchhiking across the U.S. (five times). His cousin was married to the the well-known star of Broadway musicals, Richard Kiley. His father was Harry Mead, the Wayne County Democratic Chairman and head of the Liquor Control Commission and the WPA in the Detroit area. Taylor's father appointed the resident partner of Merrill Lynch in Detroit as the State Treasurer in Michigan and then got Taylor a job working for Merrill Lynch as a broker in training. Taylor worked for Merrill Lynch for nine months before leaving on his first hitchhiking trip with just fifty dollars in his pocket - inspired by the Beat authors, Jack Kerouac and Allen Ginsberg.

Ron Rice had discovered Taylor at a poetry reading in San Francisco. When the actor that Rice originally intended to use in The Flower Thief disappeared, Taylor was given the part and Rice followed him around San Francisco with a movie camera. The Flower Thief opened in New York at the Charles Theatre at one of the screenings organized by Jonas Mekas. It broke attendance records at the venue and according to Mead, "between [Jack Smith's] Flaming Creatures and The Flower Thief we sort of kept it [the Charles Theatre] alive". (NL76) Film theorist, P. Adams Sitney has referred to The Flower Thief as the purest expression of the Beat sensibility in cinema". (AG351)

According to Taylor Mead, Warhol was aware of him from the poetry readings that Mead gave in New York in the late fifties. In the early sixties, Henry Geldzahler brought Taylor Mead to meet Andy at Warhol's house where Taylor also met Warhol's mother who was living with her son. Geldzahler had first met Warhol in August of 1960. Later, in 1964, he would be filmed by Warhol for the movie Henry Geldzahler.

In late September 1963, Mead accompanied Warhol and others on a car trip cross-county from New York to Los Angeles for the opening of Warhol's Elvis exhibit at the Ferus Gallery in Los Angeles. This was Andy's second exhibit at the Ferus. His first was in the previous year from July 9 - August 4, 1962 which is generally accepted as Warhol's first solo pop show. At the first exhibit Warhol had shown the Campbell's soup paintings.

While in Los Angeles, Warhol and his entourage filmed scenes for what would become Taylor's first film for Warhol: Tarzan and Jane Regained.... Sort of. The film also featured Naomi Levine who played Jane and was the first person to appear naked in one of Warhol's films. During the shooting of Tarzan And Jane she ripped off her clothes and jumped into the swimming pool where they were filming. Warhol sometimes referred to her as his first superstar. Previous to making this film she had appeared in Jack Smith's film, Normal Love. Tarzan and Jane also featured Dennis Hopper, Pat and Claes Oldenburg and the artist Wally Berman in small roles. While in Los Angeles, Warhol also shot the footage of the Elvis exhibit that has become known as Elvis At Ferus.

Upon his return to New York, Warhol shot some films featuring the person who would later, in 1964, become the first Warhol casualty by dancing out of the window of a Greenwich Village apartment while high on drugs. He was...