The certificate of incorporation for "Factory Additions UK Ltd." with John Nicholson as the company director

The "Factory Additions" certificates of authenticity that accompanied the Psaier paintings gave the impression that they had something to do with Warhol's company Factory Additions, particularly given the claim made in John Nicholson's press releases that Psaier and Warhol collaborated on "joint works" of art. Linking Psaier to Warhol increased the potential value of the paintings. As Psaier "researcher" Jacqueline Chapman noted on her AndAntiques website on 13 February 2008, "As the value of Psaier's works increases, the world of art is expecting to see another steep increase in the price of his work when he is sadly declared officially dead in 2011." Yes, this is the same Jacqueline Chapman who claimed on her PietroPsaierArtist site that Psaier's therapist had produced a death certificate in 2009. But how did Chapman come to know that Psaier had a therapist named Carlos Langelaan Alvarez in the first place? Who told her? Nadia Fairchild? Or Nadia's close friend Peter Psaier? (Peter and Nadia ran "Studio Psaier" in Los Angeles.) Chapman has so far produced neither the death certificate nor a birth certificate. Chapman and Nicholson allege that Pietro Psaier died in the tsunami in 2004.

Around the same time that Nicholson incorporated Factory Additions in the U.K., announcements began appearing in Art in London magazine which promised that the "first and last" sale of Psaier's work was "coming soon." 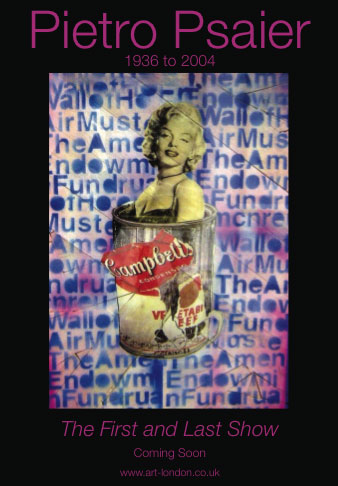 By the following issue of Art in London (Spring 08), a painting by "Pietro Psaier" was on the front cover of the magazine and the "first and last show" had evolved into the "Pietro Psaier: The Artist Behind Andy Warhol" show: 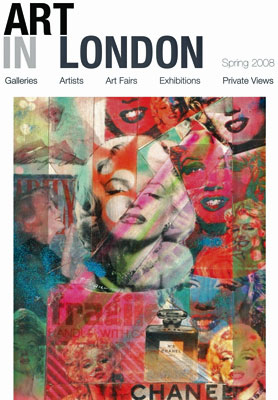 Here is how the announcement for the show appeared on the Art in London website: 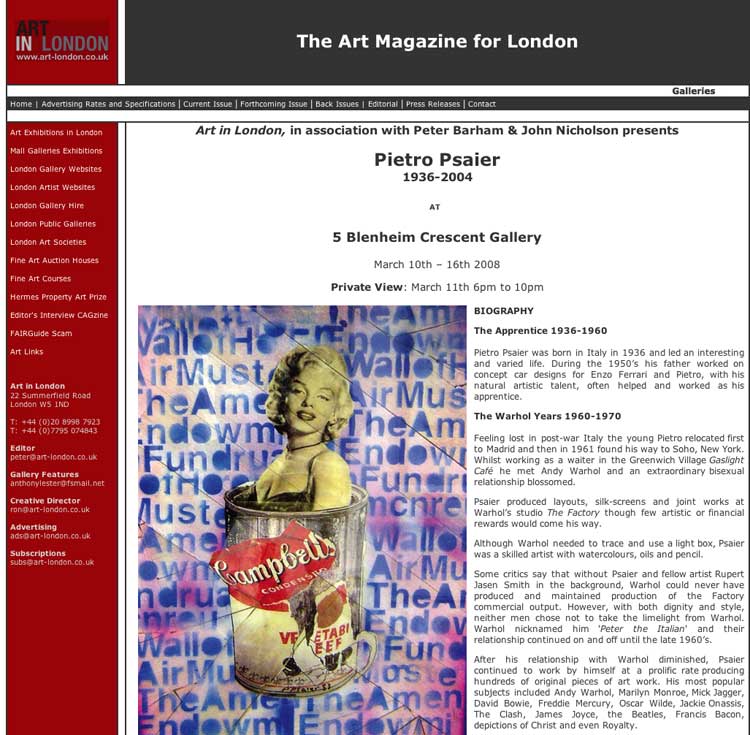 Top half of the announcement that appeared on the Art in London website for the Pietro Psaier exhibition that was presented by "Art in London, in association with Peter Barham & John Nicholson"

The announcement originally appeared here but was removed after my initial disclosures about Psaier two years ago. It can still be read in its entirety here.

The fact that the exhibition was being presented by an art magazine lent credence to the claims made about Psaier - including the claim that he and Warhol collaborated on "joint works" of art, as stated in the announcement for the show. Bit by bit, article by article, an identity was built up for Psaier over time. But surely the editor of an art magazine would realise the absurdity of the claims or at least be suspicious enough to check them out. It's not every day that you are presented with an artist who supposedly collaborated with Warhol. I checked out the claims on the press release in a relatively short period of time and disproved most, if not all of them. (See "Claims and Contradiction") Why didn't the magazine do the same, particularly given that they were presenting an exhibition of work by the artist?