to: page numbers and topics

Philip Pearlstein (Artist and Carnegie Tech. classmate): I first met Andy when I returned from the army. I went back to Carnegie Tech after getting discharged. I had won a prize in National Scholastic High School [magazine] and a painting was reproduced in Life magazine. So I came back with a kind of notoriety and maybe that's what attracted Andy to me. But he began hanging around. (CW) 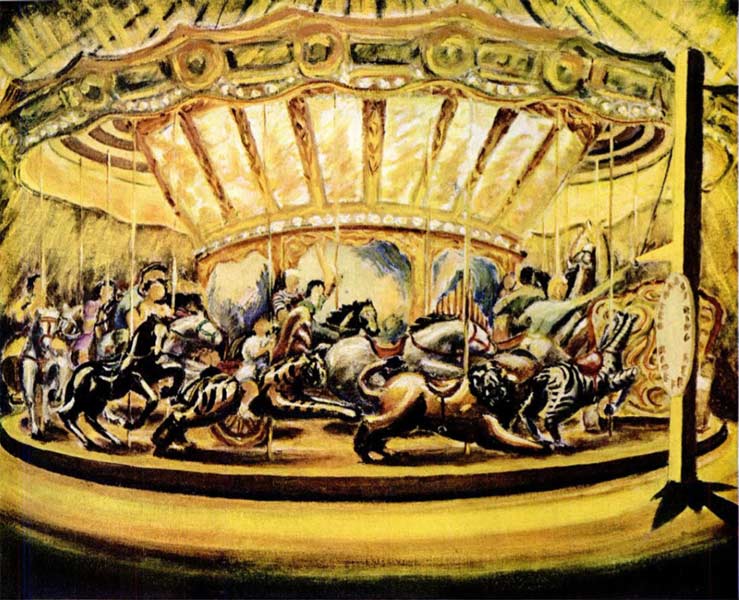 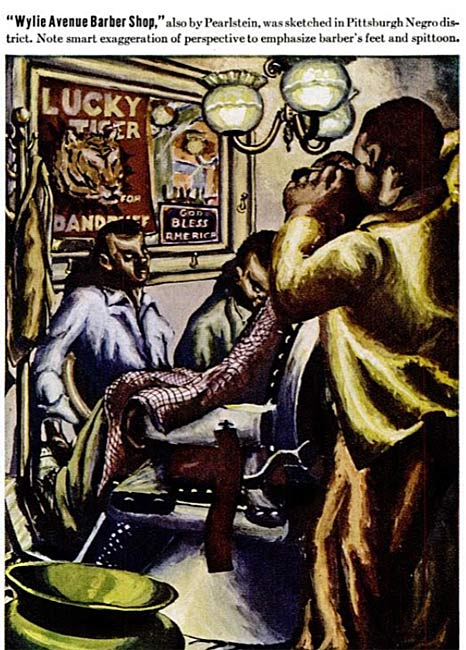 Life magazine (16 June 1941): To these pages LIFE welcomes a new generation of U.S. artists. They are 15,000 youngsters, from over a thousand high schools, who sent their very best masterpieces to Pittsburgh’s Carnegie Institute last month for its 14th annual show of high school art. In a clutter of wrapping paper and straw, the judges finally selected 1,163 items to exhibit. Ten of the prizewinning paints are herewith reproduced in color…. ‘Merry-go-round’ is painted with slapdash brush and bold colors well suited to this circusy subject. It is by Philip Pearlstein, 17, of Pittsburgh, who got his first training from the Saturday morning art classes at Carnegie Museum. Philip’s family, like most modern parents, encourages his art career. Parents in the past were not always so intelligent. (YG56-7)

Bennard B. Perlman: After two years at Carnegie Tech, students were required to declare the option they would follow as juniors and seniors: pictorial design, industrial design, or art education. Anticipating this, Andy and I paid a visit to Sam Rosenberg, the kind, portly father figure who had become our favorite instructor… ‘Mr. Rosenberg,’ I began, ‘we would like to become artists, but how do you earn a living from painting?’ he replied forthrightly, ‘Well, look what I’m doing.’

Andy was still considering a teaching career so these words were reassuring, yet he was unaware of the demands of the profession. When a classmate asked him about his life’s ambition, Andy replied that he wanted to teach children how to play. Rosenberg, who had been conducting adult classes at the Young Men’s and Young Women’s Hebrew Association for years, arranged for Andy to teach a class of teenagers there after school…

This proved a short-lived experience, however, because of Andy’s shy, quiet, manner. The trial run strongly suggested that the art-education option was not for him. He chose pictorial design instead.

Jesse Kornbluth (Author of Pre-Pop Warhol): After his freshman year, Andy shared a Victorian barn in Pittsburgh with Pearlstein, Dorothy Kanter (later to be Pearlstein’s wife), a painter in his thirties named John Regan, and Arthur Elias. It was, for all these budding artists, a deeply romantic time – as Elias says, ‘it was the turning point of all our lives, the summer we all shared a studio and decided to be painters.’ And why not? Their total rent for three months was only ten dollars, friends who performed in a chamber orchestra played at their parties, and, when this avant-garde gang went out, it was to highly cultural events like a performance of Martha Graham’s Appalachian Spring.

In such an atmosphere, art was always lofty, motives were always pure. ‘Philip was writing and illustrating a book about the Constitution, I was making semi-abstract paintings, and Andy was working out a style based on Ben Shahn, Paul Klee and Alexander Calder,’ Elias reports. So if Andy’s friends looked out for him, it wasn’t because he was other-worldly, but because he was talented. ‘Everything he did was a big surprise, and charming,’ Elias says. (JK36/40)

Bennard B. Perlman: Andy’s presence there was limited to evenings plus some Saturdays and Sundays… On weekdays Andy was otherwise occupied, having landed a job at the Joseph Horne department store in downtown Pittsburgh, where he was assigned to the display department. Here he entered the world of commercial art… (BP157)

Philip Pearlstein: A big influence in Andy's life at that time was getting a job in a department store, Joseph Horne's [in the summer of 1947 (MWC)]. He looked at all the magazines they had and he studied them and I think that was the real influence - not what he was getting in school. (CW)