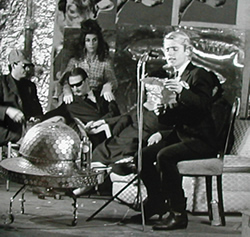 FuFu Smith (in cap), Mario Montez, Jack Smith (in sunglasses) and Gerard Malanga on the set of Camp at the Factory (October 30, 1965) (Photo: Fred W. McDarrah)

Although the Jonas Mekas and Stephen Koch filmographies list Camp as being shot in August or September 1965, the above photograph of actors on the set of Camp was taken on October 30, 1965. (SU130)

Camp was the last Warhol film that Baby Jane Holzer appeared in. She left Warhol's Factory soon after Edie Sedgwick's arrival on the scene. In response to an interviewer's question about whether she felt comfortable at Warhol's Factory during that period, she responded that "there was a period when I wanted out of there. I mean, it got a little bit sick, it just felt that the movies got a little bit too strange. People showed up at the Factory and I got a bad vibration from them." (UW49) Holzer stayed away from the Warhol scene until after he was shot in 1968. She re-established contact with Warhol and continued to socialise with him in the seventies and throughout the eighties.

Camp is in the style of a variety show, staged at the Factory, complete with the floating silver pillows. It features Gerard Malanga, dressed in a tuxedo, as the master of ceremonies. Gerard also does a poetry reading. Paul Swan, the famous turn of the century modern dancer, re-stages one of his old dances and ends up dancing with Jane Holzer. Jane leaves the film set after her part is done, while the others remain. Mario Montez sings If I Could Shimmy Like My Sister Kate and dances in drag, while the cameraman zooms frantically in and out. Singer Tally Brown imitates Yma Sumac and introduces underground filmmaker Jack Smith who crosses the Factory floor and dramatically opens a closet door. (BN56, CM, DB200)

Tally Brown was involved in the underground film scene in New York in the sixties as well as being a jazz/blues singer. At one point she even rehearsed with Lou Reed and the Velvet Underground with the possibility of becoming involved with the band - but she preferred singing jazz and blues to rock and roll. In 1977, Tally Brown performed at the benefit at Renos to raise cash for Holly Woodlawn to pay back some money she had embezzled. In 1979, the German film director Rosa von Praunheim made a documentary called Tally Brown, New York, which featured Tally Brown, along with Divine, Gil Fontaine, Taylor Mead and Holly Woodlawn. (IMDB)

In addition to Camp, Dancer/artist Paul Swan also starred in another Warhol film, appropriately titled Paul Swan. Swan, who was born in 1883, was once called "the most beautiful man in the world" by a journalist. In addition to dancing, he also painted as well as acted both on stage and in films. He appeared in Cecil B. DeMille's Ten Commandments in 1923.

Tosh Carillo also appeared in Warhol's Horse and Vinyl and worked in a floral shop. He was known for his "educated toes" which he used in Horse. He could pick up pencils and write with his toes, as well as unzip the flies of trousers with them. In real life, he was heavily involved in the S & M scene and had his own "gameroom" for his sexual activities. (SG497)