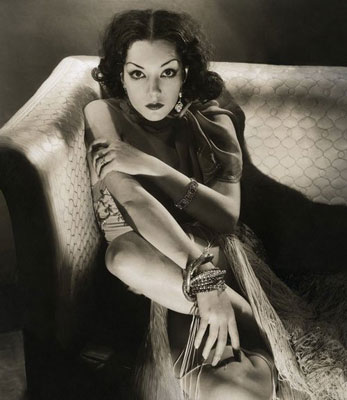 Lupe was shot in December 1965 using Andy Warhol's sync-sound Auricon camera which resulted in a very poor quality soundtrack. The Auricon recorded an optical soundtrack directly on the film during shooting but optical tracks required black and white processing to avoid distortion and Lupe was shot and processed in color. (FAW25) According to Caffe Cino playwright Robert Heide, Warhol had originally approached him about writing the script for Lupe:

"During this period I conferred with Andy about writing The Death of Lupe Velez for Edie who was anxious to play the role of the Mexican Spitfire, found dead in her Hollywood hacienda with her head in a toilet bowl. I met Edie at the Kettle of Fish on MacDougal Street to talk over the project. When I got there Edie was at a table with a fuzzy-haired blond Bob Dylan whose shiny black limousine was parked outside. I mentioned the script I was working on and Edie said innocently, 'Oh, we already filmed that this afternoon. It's in the can... in Technicolor.' Nothing was said when Andy arrived, although he did astonish me that evening by asking, 'When do you think Edie will commit suicide? I hope she lets me know so I can film it'." (VVR) 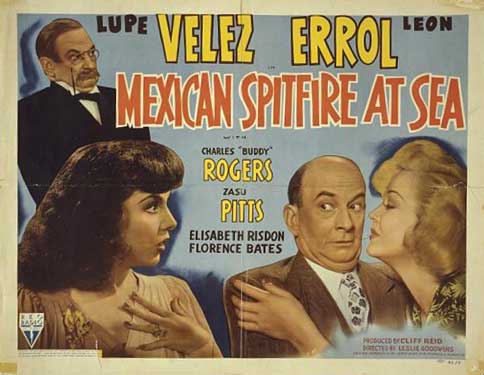 As Callie Angell noted in the Films of Andy Warhol (Part II), although Warhol's movie took Velez as its inspiration, it actually featured Edie "simply acting as herself."

"... the film shows Edie engaged in what might have been the regular activities of her life - listening to music, dancing, playing with a kitten, taking pills, eating supper, waking up in the morning, putting on her makeup, getting a haircut from Billy Name, and so on. Warhol's camera documents all of this in a fairly straightforward manner, occasionally abandoning the action of the film to pan slowly up to the high molded ceilings, as if gazing in awe at its elegant surroundings. The only concessions to the narrative premise of the film are the 100-foot silent shots spliced on the end of each reel, which show Edie slouched on a bathroom floor with her head in the toilet." (FAW24)

Velez was linked romantically to a number of Hollywood actors, including Gary Cooper. Life Magazine reported, "... he [Cooper] had a magnetic effect on Hollywood's luscious young actresses... for two hectic years he shared a Laurel Canyon hideaway with Mexican actress Lupe Velez, various transient Velez relatives and two caged golden eagles." Marlene Dietrich has been quoted about Cooper's relationship with Lupe, saying "Gary was totally under the control of Lupe." Other Hollywood actors who reportedly had affairs with Velez included John Gilbert, Charlie Chaplin, Jack Dempsey and Victor Fleming.
(Paul O'Neil, "A Shadow Taller Than Life," Life magazine, May 26, 1951)

Lupe married Tarzan - Johnny Weissmuller - in 1933, but divorced him about five years later. At the time of her death she was unmarried and pregnant. She left behind a suicide noted addressed to actor Harald Maresch with whom she had been having an affair.

"In Hollywood, whose great ladies may water-ski in evening gowns, Guadaloupe Velez de Villalobos became rich and famous and was known as Lupe Velez. She lived in a Spanish mansion, bathed in a jade-green tub, slept in a bed which was eight feet square, and was courted by many handsome men. She had been impatient with her good home in Mexico and with San Antonio's Convent of Our Lady of the Lake, where she was instructed in the duties of womanhood. But although she lived in Hollywood for 17 years and changed the color of her hair, she could never forget that she was really Guadaloupe Velez de Villalobos. Last week this fact proved fatal...

Few months ago she fell in love with a young and darkly handsome Continental with an adventurous past. Harald Ramond had fought the Nazis in Vienna and Prague, was captured and escaped from Dachau, fought the Nazis again in France, then came to Hollywood as a bit player. Soon thereafter, Lupe became pregnant. And although her make-believe world had a solution even for this age-old dilemma, Guadaloupe Velez de Villalobos could not bring herself to accept it. One night last week she had a long chat with two close friends. She was distressed, and she said so. The friends left at 3:30 a.m. Lupe whistled for her dogs, went to her bedroom. She undressed, stepped into blue silk pajamas, sat down on her huge bed to scribble a note. In her childish scrawl she wrote: 'Harald: May God forgive you and forgive me too, but I prefer to take my life away and our baby's before I bring in him with shame or killing him.'

Then she climbed between her white silk sheets, arranged her blond hair in a circle on the pink silk pillow. Hastily she swallowed an overdose of sleeping pills. Next morning, the first policeman to arrive described his first impression: 'She looked so small in that outsize bed that we thought at first she was a doll.'"

Coincidentally, the star of Warhol's Lupe, Edie Sedgwick, would also later die in bed from an overdose of sleeping pills - although in her case it was attributed to an accidental overdose. In Warhol's film, Lupe dies not in bed but with her head in a toilet. According to POPism "We'd all heard the stories about Lupe Velez, the Mexican Spitfire, who lived in a Mexican-style palazzo in Hollywood and decided to commit the most beautiful Bird of Paradise suicide ever, complete with altar and burning candles. So she set it all up and then took poison and lay down to wait for this beautiful death to overtake her, but then at the last minute she started to vomit and died with her head wrapped around the toilet bowl." (POP127) That description of her death may have had more do to with Kenneth Anger than Lupe Velez, however. It was Anger who claimed in his book, Hollywood Babylon, that Velez had died with her head in a toilet bowl. Anger's book was first published in 1965 but was banned shortly thereafter and re-published in 1975. (KA) Michele Vogel, the author of a forthcoming biography on Velez, confirms that she did not die with her head in a toilet.

"Lupe has long been wronged with the 'she died with her head in the toilet,' suicide story that was originally printed in Hollywood Babylon... Why this lurid embellishment was needed is beyond me! It wasn’t tragic enough that a beautiful, talented, thirty-six year old woman decided the best and only option she had was to kill herself and her unborn child rather than become an unwed mother? Lupe Vélez did NOT die with her head in the toilet. She died in her bed."
(http://peteduel.wordpress.com/tag/lupe-velez/)

At the time that Warhol filmed Lupe (in December 1965) his relationship with Edie Sedgwick had become strained. Edie had become romantically involved with Bob Dylan's road manager Bob Neuwirth and was hoping to become part of Dylan's scene. Warhol, meanwhile, focused more on the Velvet Underground who he met during the same month that he filmed Lupe. Warhol had planned to have a retrospective of Edie Sedgwick films at the Film-Makers' Cinematheque in February 1966 but replaced it with a multimedia production featuring the Velvets called Andy Warhol - Uptight. Lupe premiered as part of that show on February 8th with all three reels of the film shown in a triple screen projection. (FAW25)

Lupe was one of the last films that Warhol made with Edie, although she did appear in reels 38 (Edith Sedgwick) and 41 (Edith and Ondine) of ****(aka Four Stars or The Twenty Five Hour Movie). The Edie footage in **** was "probably filmed around the end of 1966." (FAW25). She was also reputedly in The Andy Warhol Story (or Rene as Andy), which is described by the Andy Warhol Film Project (Whitney Museum of American Art) as "an unreleased and reportedly vicious two-reel feature made in 1966, in which both Rene Ricard and Edie pretend to be Andy Warhol." (Ibid)