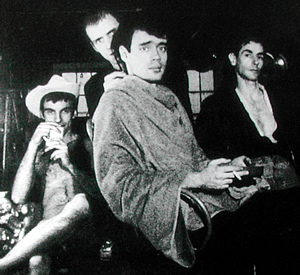 "The opening frames present three men standing in this space. In the middle distance is a dark young man with dark hair: It is Billy Linich [Name]. Nearer the camera is another man with a faintly more Wasp look. Nearest the camera, in the extreme foreground and brilliantly bathed by the key lamp, the most visible and conspicuous of the three, is a very nasty-looking type posing without a shirt [Freddy Herko]. He wears exhibitionistically tight, and very dirty, white jeans that glare a bit in the lens... Bluntly he looks like he knows 42nd Street... His face and body have the strungout wiriness, the tough, undernourished gracelessness of a slum escapee who survives on street food, on sausage sandwiches bought at greasy open-air stands, hot dogs, Pepsis, and amphetamines..."(SG54)

There were actually three Haircut films. These have been numbered by the Whitney Museum of Art as part of their Andy Warhol Project. (FAW12)

In addition to the Haircut films, Andy Warhol also used an early video camera that Norelco loaned him in 1965 to video Billy Name giving Edie Sedgwick a haircut on the fire escape of the Factory. (POP119) Billy also cut hair in Warhol's film, Lupe. (FAW12)

The idea for Haircut No. 1 originated from Billy Name's haircutting parties that he held in his apartment on the lower east side of Manhattan. Billy had learned how to cut hair from his great-uncle, Andy Gusmano, who was a barber in Poughkeepsie. (AWM54) Name's friends would attend his haircutting parties to socialize and get their hair cut.The November 1963 issue (no. 27) of The Floating Bear, an underground newsletter edited by Diane de Prima and LeRoi Jones, contained a "review" of one of Billy's parites by John Daley. (FB323-4) 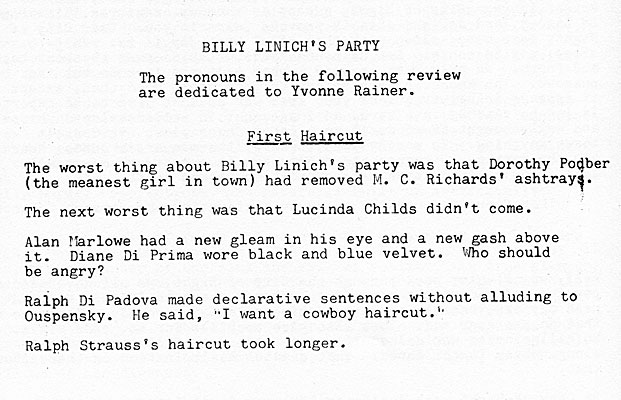 Haircut No. 1 was not actually filmed in Billy's apartment. It took place in a vast loft with key lighting from a single spot, "revealing only enough to hint at the battered industrial wood floors and walls, the scuffed and broken Salvation Army Furniture, along with some light breaking in a blur through a window nearly opaque with the city's grime." (SG52)

The six 100 foot rolls of film shot for Haircut No. 1 were each shot from a different angle, with each shot carefully framed with dramatically different lighting designed by Billy Name. "The layered compositions of overlapping figures and faces stress the depth of the film images, while the grainy, high-contrast quality of the Tri-X film heightens the expressionist use of light and shadow. The final 100 foot roll contains three brief, hand-held close-up shots of Name, Herko, and Daley, which appear in the middle of a longer, tripod mounted shot." (FAW12) Herko appears naked in the last reel of the film - sitting in a swivel chair, reading a magazine.

Haircut No. 2 was filmed in a kitchen, most likely in the apartment of Billy Name and consisted of 100 foot rolls of film that were repeated and flipped.

Haircut No. 3 was shot at the Factory showing Johnny Dodd getting a haircut from Billy Name. Like Billy Name, Johnny Dodd did lighting for Judson Church concerts. It was from his apartment that Fred Herko danced to his death in 1964.