The exhibition catalogue came in a box. 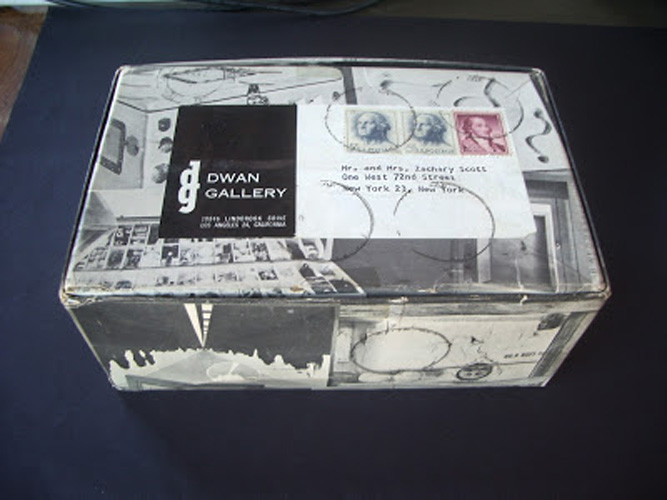 The above box is addressed to Mr. and Mrs. Zachary Scott. Presumably this is the actor Zachary Scott who was married to the actress Ruth Ford, who was also the sister of Warhol's friend Charles Henri Ford. Charles Henri Ford was the editor of View magazine and the person who introduced Warhol to Gerard Malanga. Ruth made the news after she died in 2009 and left her fortune to her Nepalese butler, including two apartments in the Dakota Building in New York. (Tom Leonard, "Hollywood actress Ruth Ford leaves $8.4m to her Nepalese butler," The Telegraph (London), 12 May 2010). 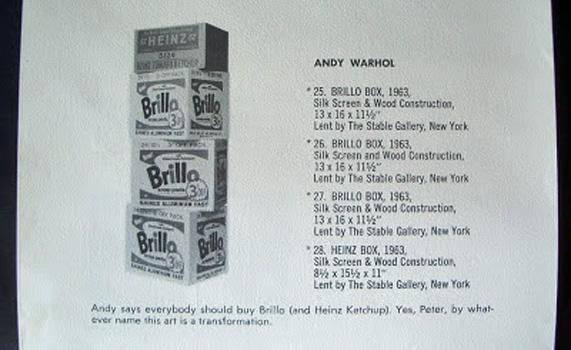 List of boxes by Andy Warhol in the Dwan Gallery box

Here is how a dealer describes the box: 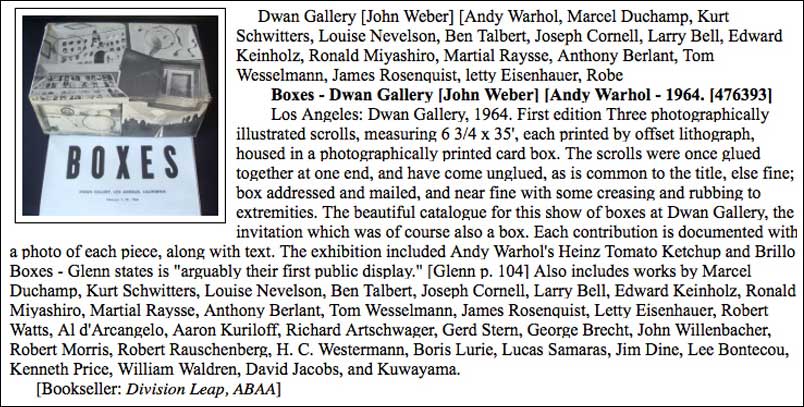 According to Vol. 02A of The Andy Warhol Catalogue Raisonne, the idea for a box sculpture had originated two years prior to the Dwan show.

The idea for a box sculpture originated in early 1962, when Warhol produced a three-dimensional version of his serial paintings of Campbell Soup Cans (fig. 6 and vol 1, cat. no. 79). At this time, Warhol's friend Edward Wallowitch also made several photographs of cardboard packing boxes from a supermarket that Warhol had arranged as studies for a sculpture that was never executed (fig, 7). In two of the exposures from Wallowitch's contact sheet, a Sta-Puf carton placed on a carton of Oreos that has been turned on its side alludes to the sculptural convention of object and pedestal.

Andy Warhol and Edward Wallowitch were lovers - see "Edward Wallowitch" here. He also photographed (real) cans of Campbell's Soup Cans in various configurations for Warhol. His photographs can be found in the cat. rais.

The cat. rais. continues with an account of how the boxes came to be in the Dwan show:

A year and a half later, in November 1963, John Weber visited Warhol to see the Campbell's sculpture of an exhibition of artists' boxes that he was preparing for the Dwan Gallery in Los Angeles during the folowing February 1964, Warhol must have either shown him the Wallowitch contact sheets or discussed the possibility, since Weber wrote to him on November 26 from Los Angeles as follows, "Your idea of making cardboard boxes sensational... if they could be finished in three weeks it would help me out... if, per chance, you can't make them in time I would like to use the Campbell Soup Sculpture."

The Heinz box - a prototype for the series proper, executed in March - April - might well have been the same one that he gave to Jasper Johns (cat. no. 739). This box may be differentiated from the rest of the Heinz series by the colors of both the background and the screen. Johns refers to it as a "1 of 1 prototype," and it is likely that he received it in early 1964, before the series was produced. He has recalled that Warhol asked him to return the box not long after he had given it, since he was about to make the others and wanted them all to look the same. Johns observered, "I told him that I wanted to keep mine as it was and that I would value the difference." In late 1964, Warhol also traded a work with Johns for five more Heinz boxes from the series (cat. nos. 754-8). "I asked Andy what he wanted in exchange and he point to a drawing that was tacked to my studio wall, Sketch for High School Days."