to July 6, 1962: Freddy Herko dances in the first Concert of Dance at the Judson Dance Theater

The First Concert of Dance at the Judson Dance Theater

The first concert of the Judson Dance Theater included a dance by performed by Warhol star Freddy Herko dancing to music by Eric Satie.

The Dance Theater originated with classes taught by Robert Dunn at the Merce Cunningham Studio. Dunn was a student of John Cage.

John Cage asked Robert Dunn to teach a class in choreography at the Merce Cunningham studio in the fall of 1960. Dunn had taken Cage's class in "Composition of Experimental Music," taught at the New School for Social Research from 1956 to 1960, as had the writers Jackson MacLow and Dick Higgins, the composer Toshi Ichiyanagi, and Al Hansen, George Brecht, and Allan Kaprow, all of whom were later associated with Happenings and Events. [ed. note - Al Hansen was the father of Warhol star Bibbe Hansen. gc]

Dunn eventually asked the head of Judson Church, Al Carmines, if they could use the church as a venue for a professional dance production and he consented.

Allen Hughes later wrote about the group in a New York Times, stressing their llinks with John Cage and Merce Cunningham.

"The nucleus of the Judson Dance Theater was formed in some classes Mr. Dunn held in dance composition. The classes did not last long, but the cooperative working association of the members did.

Their dance backgrounds are varied, some having studied ballet almost exclusively, others having concentrated on modern-dance techniques... Always in the background are Merce Cunningham and John Cage, elder statesmen in avant-garde dance and music. Many of the Judsonn people have studied with Mr. Cunningham.

In a way their relation to him and Mr. Cage is now even closer than it was, for the Judson performances were given some financial assistance by the Foundation for the Contemporary Performance Arts, which will sponsor the season Mr. Cunningham and his dance company are to give at the Winter Garden beginning Oct. 1. (Allen Hughes, "Judson Dance Theater Seeks New Paths: Avant - Gardists Give First Programs in a Church," New York Times, June 26, 1963)

According to Banes, "Dunn suggested calling the first performance of dances, A Concert of Dance to invoke a historical tradition of nonnarrative dance and to suggest an intimate chamber, presentation." (p. 38) (Many of Warhol's early films also utilized a "non-narrative" approach in so far as they didn't tell a story.)

Robert Dunn selected the order of the dances on the program... Steve Paxton and Fred Herko formed the publicity committee. Paxton designed the flyer, which is plain, clear, but also witty in his hint of repetition and reversal. Herko wrote the press release, dated for release 22 June, which explains that he "young professional dancers" involved in A Concert of Dance use a variety of choreographic techniques. The participants are named: Bill Davis, Judith Dunn, Robert Dunn, Ruth Emerson, Deborah Hay, Fred Herko, Richard Goldberg, David Gordon, Gretchen Maclane [sic], John Herbert McDowell, Steve Paxton, Rudy Perez, Yvonne Rainer, Carol Scothorn, Elaine Summers, Jennifer Tipton. This notice lists choreographers and performers together as participants, without setting up a hierarchy of status. "Indeterminacy, rules specifying situations, improvisations, spontaneous determination, and various other means" are named as choreographic strategies... An abbreviated version of this notice, consisting of the first paragraph and including the names of all the participants, appeared in the Village Voice on 28 June... (JD38-39) 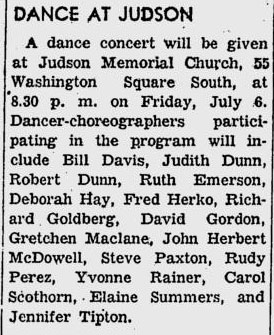 The evening started with the projection of a film - Overture - which consisted of edited clips from a variety of sources. The people listed as the makers of the film were: W.C. Fields, Eugene Freeman [sic], John Herbert McDowell, Mark Sagers, and Elaine Summers. Summers had learned filmmaking from Gene Friedman who was also a friend of McDowell. Friedman encouraged in camera editing - a technique that Warhol would also employ.

He [Friedman] would say, 'Take a three-minute reel of film and do a complete story nonverbally with it. And no cutting, you have to do it in the camera.' And then he would want one that had zooms... John [Herbert McDowell], Gene and I got together and used a chance system from the telephone book. We took all the film strips, and we rolled them up, and we put them in a big paper bag. They had numbers on them... We'd get a number from the telephone book, like 234-5654, and we'd have to put the film strips together in that sequence." (JD41)

McDowell later recalled that some of the film segments were upside down and backwards. (JD41) Summers also choreographed a dance for the evening - Instant Chance - which included Freddy Herko in the cast. (JD48) Herko also performed in other dances during the evening including a solo performance - Once or Twice a Week I Put on Sneakers to Go Uptown - to music by Erik Satie. (JD43)

Allen Hughes reviewed it in the July 7, 1962 issue of the New York Times in an article headed "Dance Program Seen at Church: Unconventional Concert Is Given at Judson Memorial," p. 9:

In Greenwich Village last night, about a dozen young people got together to give a dance concert at the Judson Memorial Church. There was hardly anything conventional about it...

Some of the titles of the dances read as follows: "Once or Twice a Week I put on Sneakers to Go Uptown," Dance for 3 People and 6 Arms," Helen's Dance," Instant Chance." Credits for the overture, which was the showing of a moving picture "assemblage," included the name of W.C. Fields, who was shown in a funny automobile-chase sequence from one of his early movies.

The overture was, perhaps, the key to the success of the evening, for through its random juxtaposition of unrelated subjects - children playing, trucks parked under the West Side Highway, Mr. Fields, and so on - the audience was quickly transported out of the everyday world where events are supposed to be governed by logic, even if they are not.

Hughes then went on to describe Herko's solo dance under the heading "Music by Satie," followed by Elaine Summers' Instant Chance dance (which also included Herko as one of the dancers.) (JD48)

Sally Banes later drew the connection between what was going on at the Judson and Pop Art:

... certainly connections could be drawn between the factual realism of much of the work at Judson and the new, figurative paintings of the Pop artists. The use of sports images, of flags, of popular genres and Hollywood myths, radio music, and even of the ballerina image served as raw source material for the Judson choreographers, just as highways, beer cans, Coca-Cola bottles, and pictures of Marilyn Monroe served the Pop artists. The found gesture - whether from everyday life or "commercial" dance - was used in dance in much the same way that the found object - either junk or the imagery of commercial art or ordinary industrial products - was used in fine art. Impersonal methods of creating dance - through chance or distancing techniques - had their parallels in the silkscreens, projected enlargements, and factory-made objects by Pop artists. (JD129-130)

to July 6, 1962: Freddy Herko dances in the first Concert of Dance at the Judson Dance Theater