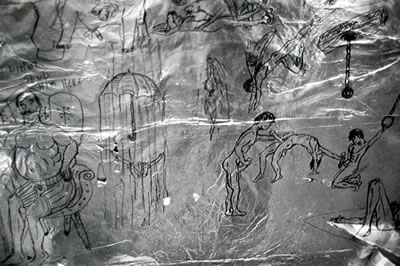 The bathroom wall at the Factory after being
covered in silver foil by Billy Name.
Graffiti by Binghampton Birdy.
(photo: Stephen Shore)

"Andy and I spent about 6 weeks looking at spaces. Finally he settled on this one space located between 2nd and 3rd Avenues on 47th Street. It was formally a hat manufacturing company, but had closed shop. Andy was attracted to the space because it didn't appear to be your typical artist's studio, with wood floors and big windows looking out on a grand urban vista. It didn't have that artsy aura. It had, more or less, an anonymous feel to it. you walked into it and you weren't quite sure what it was or what had gone on there previous. Andy kind of liked that." (GM185)

"Completed in 1887, the five-story building that housed Andy Warhol's Silver Factory was originally the Peoples Cold Storage and Warehouse. The structure stood on the site of the former F.A. Neumann Brewery, which sold lager beer in the mid to late 1980s. Over the years, it housed many businesses including an electrical work-station, a cigar manufacturer, and a few woodworking operations. The fourth-floor Factory space had likely housed an upholsterer's shop that outfitted newly-made furniture (Decorators Upholstery), not, as is commonly thought, a manufacturer of hats." (TKA70)

"At the end of November 1963 a truck containing Warhol's painting equipment from the firehouse and 1342 Lexington Avenue pulled up outside a warehouse and factory building on East 47th Street... The new space was on the fifth floor of 231 East 47th and could be reached by a large open freight elevator, which sometimes broke down, or a flight of stairs." (LD188)

"... the Factory, as Warhol calls his studio... is located on the fourth floor of a rickety loft building in Manhattan's east forties." (KG97)

“The Factory was about 50 feet by 100, and it had windows all along 47th Street looking south. It was basically crumbling - the walls especially were in bad shape. I set up my painting area with the workbench near the front by the windows, but I kept most of the light blocked out - that’s the way I like it.” (POP61)

The space at the back of the Factory gradually became Billy Name’s space. (POP61) Billy had done lighting at some Judson Church productions and had been a waiter at Serendipity.

Billy Name “gave the impression of being generally creative - he dabbled in lights and papers and artists’ materials. In the beginning he just fussed around like the other A-heads, doing all the busy stuff, fooling with mirrors and feathers and beads, taking hours to paint some little thing like the door to a cabinet... and sometimes he was so high he wouldn’t even realize that he’d just painted it.” (POP63)

Billy furnished the Factory with trash he found on the street, including, as noted in Popism, “the huge curved couch that would be photographed so much in the next few years - the hairy red one that we used in so many of our movies - Billy found right out in front of the “Y”. (POP63-64) He was also responsible for covering the crumbling walls and pipes in silver foil, spraying everything with silver paint, “right down to the toilet bowl.” (POP64)