Viva and Andy Warhol's mother after the shooting

Andy Warhol and Fred Hughes talk on the phone. Fred tells him how he was mugged the night before on 16th Street coming home from Max’s.

Valerie Solanas goes to the Factory (33 Union Square West) and is told Warhol is out. She thinks that he is conspiring against her with Maurice Girodias, publisher of Olympia Press. (UV170/171). She leaves and waits outside near 16th Street. (L&D296/7) She had once brought a script to the Factory for Andy to read called 'Up Your Ass'. Warhol “looked through it briefly and it was so dirty,” he .“thought she might be working for the police department and that this was some kind of entrapment.” When Warhol admitted to losing the script, Solanas started asking for money.

“One afternoon when she [Valerie Solanas] called, we were in the middle of shooting a sequence for 'I, A Man, so I said why didn’t she come over and be in the movie and earn twenty-five dollars instead of asking for a handout. She came right over and we filmed her in a short scene on a staircase and she was actually funny and that was that.” (POP271)

Warhol arrives at the Factory in a cab, wearing a brown leather jacket over a black t-shirt , black jeans and black Beatle (Chelsea) boots. (L&D296) Previously, he had picked up a prescription for Obetrol, then browsed at Bloomingdales, and had also rung the bell of Miles White, the costume designer, who lived on East 55th Street, but he wasn’t home. (POP270/DD71)When Andy arrives outside the Factory, his boyfriend Jed Johnson approaches from 17th and Broadway carrying some fluorescent lights. Valerie Solanas joins them and all three enter the building. While waiting for the elevator, Warhol notices that Valerie is wearing a thick turtleneck sweater underneath a trenchcoat on a hot summer day. Even stranger, she has on mascara and lipstick even though as a die-hard feminist she never wears make-up. Warhol also notices that she is “bouncing slightly on the balls of her feet, twisting a brown paper bag in her hands."

Upstairs, Fred Hughes is sitting at his desk writing a memo, Paul Morrissey is talking to Viva on the phone who is ringing him from Kenneth’s Hair Salon where she is having her hair dyed in preparation for her role in John Schlesinger’s film Midnight Cowboy. Art critic and curator, Mario Amaya, is waiting for Andy in order to discuss an upcoming retrospective in London.

When Warhol, Jed and Valerie arrive, Paul leaves the office to go to the bathroom, leaving Andy to talk to Viva. (L&D) Jed goes into Warhol's private office in the rear corner of the room. Andy signals to Fred Hughes to take over the conversation with Viva.Valerie Solanas takes a .32 automatic from the paper bag and fires a shot. Viva hears the shot over the phone but thinks it is somebody cracking a whip left over from theVelvet Underground days. Andy screams "No! No! Valerie! Don’t do it!" She fires a second time. He falls to the floor and tries to crawl under a desk. She fires a third time. The bullet enters Andy’s right side and goes straight through him, coming out the left side of his back. Warhol later tells friends "It hurt so much, I wished I was dead."

Thinking that she has killed Warhol, Solanas turns to Mario Amaya who is crouching on the floor and fires a fourth shot at him. She misses so she shoots again, hitting him slightly above the hip. The bullet goes through him without damaging any organs, exiting from his back. He gets up and runs into the back room, using the weight of his bleeding body to hold the doors shut.

Valerie Solanas points the gun at Fred Hughes who begs her not to shoot him. “I’m innocent,” he protests. “Please, just leave.” She walks over to the elevator and presses the button then returns to him, aiming at his forehead with the gun. She pulls the trigger, but it jams. She grabs a back up gun, a .22 caliber from the paper bag but the elevator arrives and she leaves.

As soon as she leaves, Fred Hughes calls for an ambulance and the police. The phone rings. It is Viva, still at the hairdresser's, wondering what is going on. Fred tells her that Valerie just shot Andy and that there is blood everywhere, then hangs up the phone. Viva, thinking it is a joke, decides to have her hair trimmed before having it dyed. She tells the hairdresser to charge it to United Artists.

Gerard Malanga arrives at the Factory with Angus Maclise two or three minutes after the shooting. Gerard was preparing a one man show at the Cinematheque and was picking up money from Andy to pay for a film announcement. The scene at the Factory was "total mayhem." (GM193)

Warhol lies bleeding on the floor with Billy Name leaning over him crying, while they wait for the ambulance to arrive. (POP273)

The ambulance arrives at the Factory. Instead of bringing a stretcher, the attendants arrive with a wheelchair to carry Warhol out. Andy: "I thought that the pain I'd felt lying on the floor was the worst you could ever feel... but now that I was in a sitting position, I knew it wasn't." (DD75)

The ambulance takes away both Warhol and the wounded Mario Amaya. The driver tells Mario that "if we sound the siren, it'll cost five dollars extra." Mario replies "Go ahead and sound it. Leo Castelli will pay." (DD75)

Andy Warhol arrives by ambulance at the emergency room of Columbus Hospital on 19th Street between Second and Third avenue. (POP274)

Andy Warhol is pronounced clinically dead. The doctors cut open his chest and massage his heart. They are amazed by the damage caused by the bullet which went through his lung, then ricocheted through his oesophagus,gall bladder, liver, spleen, and intestines before exiting his left side, leaving a large hole. He is dead for 1 1/2 minutes before they revive him. They operate for five and a half hours, removing his spleen. He is in critical condition, but survives.

Valerie Solanas walks up to rookie traffic cop, William Shemalix and says “The police are looking for me and want me.” She hands the guns over to the cop saying that she had shot Andy Warhol “because he had too much control of my life”. (L&D296/03) She is arrested and sent to Bellevue Hospital for psychiatric examination, then to Elmhurst General in Queens. She is initially held without bail but eventually her bail is set at $10,000. (UV186)

"I just wanted him to pay attention to me. Talking to him was like talking to a chair." (BC32) 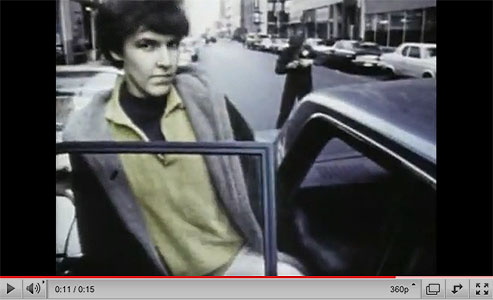 Footage of Valerie Solanas being led from court to jail
(http://www.youtube.com/watch?v=4dAEFshPrXY)

Fred Hughes and Jed Johnson are released from the 13th Precinct police station where the police had been questioning them. Fred later tells Andy: “They questioned us until about nine o’clock that night. They told us we were ‘material witnesses,’ and I was so naive I didn't realize that that meant they were holding us as suspects... until after they booked Valerie, I guess.” (POP278)

“About eight plains clothes detectives came up, and they were running all over the place... like the Keystone Kops... and after they’d been poking around for at least two hours - every drawer in every cabinet was pulled out - I saw a paper bag sitting right on top of the desk where you [Andy] were shot... in this paper bag was another gun, Valerie’s address book, and a Kotex pad!” (POP279) 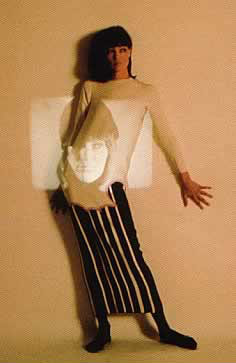 While Andy is recuperating in the hospital, Ivy Nicholson, (Batman Dracula/Couch/The Thirteen Most Beautiful Women/****/The Loves of Ondine/I, A Man),“a tall beautiful model, sometime actress, and mother of four children,” threatens to kill herself if Andy dies, thinking that Andy will marry her. Louis Waldon (Nude Restaurant/Lonesome Cowboys/Blue Movie) takes her home and keeps an eye on her while she calls the hospital “every ten minutes, ready to jump at the fatal word.” (UV173)

In a telephone conversation to Andy while he is still in the hospital, Ultra Violet asks him “How do you explain it all? Why were you the one to get shot?” He replies, “I was in the wrong place at the right time.” (UV178)