Andy Warhol wasn't the only person doing flowers in 1964. One of his first superstars, Naomi Levine, was also known for her depictions of flowers. Jonas Mekas wrote in his 24 December 1964 Village Voice column, "Naomi Levine has many faces. There were times when Naomi was a troublemaker. She was protesting. Peace strike... closing of the Living Theatre... disarmament... movie censorship - she was there, ready for any cause. At the same time Naomi was painting flowers. Huge colorful, sad, almost tragic flowers. She still paints them. She paints flowers everywhere she goes." (JM168) Mekas later reproduced one of her flower drawings in his 1972 book, Movie Journal: The Rise of a New American Cinema 1959-1971: 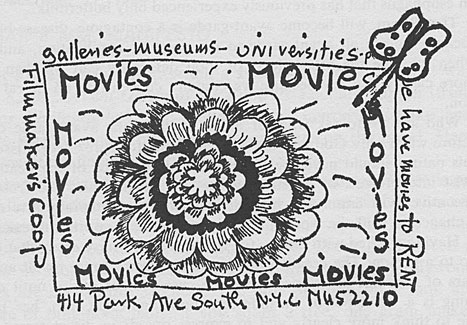 Naomi Levine's drawing of a flower

It's unknown when she first started doing flowers but in his 25 July 1963 Village Voice column, Mekas mentioned her flowers in regard to her first film: "Naomi Levine has just finished her first movie. It is like no other movie you ever saw. The rich sensuousness of her poetry floods the screen. Nobody has ever photographed flowers and children as Naomi did." (JM89)

When asked by Mekas in a 1964 interview what she would like to do, Naomi replied "I would like to be queen of Channel 2 or Channel 4 - those are the biggest cinema theatres in the world - and I would like my favorite director-cameraman to eat me up." When Mekas asks her "Who's that?," she replies "He is a well-known flower maker." Presumably this was a reference to Warhol. (See: Naomi Levine Interview by Jonas Mekas.) In POPism it mentions that Gerard Malanga and Taylor Mead claimed that she was in love with Warhol. (POP44)

Andy Warhol's Flowers were based on a colour photograph of hibiscus blossoms taken by Patricia Caulfield which appeared in the June 1964 issue of Modern Photography magazine. (AWM11). When Caulfield saw Warhol's Flowers, she brought a lawsuit against the artist and was offered two sets of Flowers portfolios as payment for use of her work, but she declined the offer and a cash settlement was arranged.

"Andy realized that he had to be very careful about appropriating for the fear of being sued again. He opted to start taking his own photographs. His entry into photography vis a vis his creation of silkscreen paintings was done out of necessity." (AWP116)

Ronnie Cutrone, Warhol's assistant for ten years (from 1972-1982) thought the early Flower paintings were about "life and death":

"A lot of Andy's work revolves around that subject. The Marilyn paintings are about life and death, the Flowers are with their black, menacing background. Not the watercolor Flowers - there is nothing menacing about those flowers at all. I'm talking about the first Flowers from 1964 - they are a bit menacing. We kids - Andy used to call everyone a 'kid' until they were eighty-five years old - all knew about that. Lou Reed, Silver George Milloway, Ondine, and me - we all knew the dark side of those Flowers. Don't forget, at that time, there was flower power and flower children. We were the roots, the dark roots of that whole movement. None of us were hippies or flower children. Instead, we used to goof on it. We were into black leather and vinyl and whips and S&M and shooting up and speed. There was nothing flower power about that. So when Warhol and that whole scene made Flowers, it reflected the urban, dark, death side of that whole movement. And as decorative art, it's pretty dense. There is a lot of depth in there... You have this shadowy dark grass, which is not pretty, and then you have these big, wonderful, brightly colored flowers. It was always that juxtaposition that appears in his art again and again that I particularly love." (UW61)