From the August 2002 news section of warholstars.org: 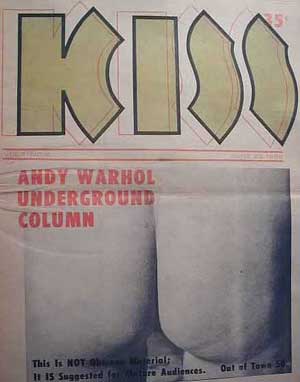 A site user has alerted me to the existence of an underground magazine called Kiss with "notes from Andy Warhol's Underground." It was edited by Bibbe Hansen's father, Al Hansen. Bibbe was in several Warhol films including the 1965 Restaurant (aka L'Avventura) and Prison with Edie Sedgwick.

Kiss started publication in June 1969 and featured a gossip column by Andy Warhol - "Rotten Rita's deperate pleas for cash have been refused and it is predicted by friends that he will end up in the gutter..." and also a column by Ondine called "Beloved Ondine's Advice to the Shopworn" - where he gives advice to people who supposedly write in. Another issue features "Underground Confidential" by Andy Warhol with photos by Warhol's then-boyfriend, Jed Johnson, which ends with "Next Week! Exclusive coverage of Jackie Curtis' wedding..." 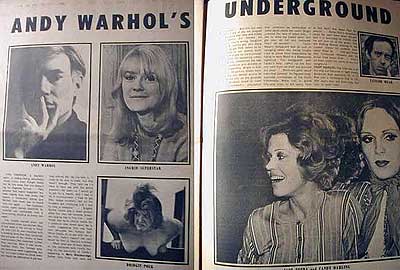 "Kiss - the paper you read with one hand! That was their ad slogan. My dad, Al Hansen, edited Kiss. Sometimes he operated the magazine under different names to elude bill collectors and subpoena servers - Tony Paycheck was one alias. When things were fine, the masthead carried his real name. He wrote hilarious articles and columns under yet more aliases. Of course, Al got all his pals to do articles and columns." (BH)