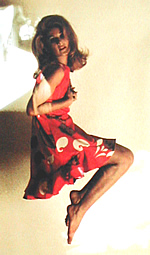 Although Andy Warhol referred to Naomi Levine as his first superstar, Holzer was really the first of his stars to attract a lot of press attention. Prior to making his first film with her, she had already been the subject of a David Bailey fashion photo shoot in English Vogue.

"Bailey is fantastic. Bailey created four girls that summer [of 1963]. He created Jean Shrimpton, he created me, he created Angela Howard and Susan Murray. There's no photographer like that in America. Avedon hasn't done that for a girl, Penn hasn't, and Bailey created four girls in one summer. He did some pictures of me for the English Vogue, and that was all it took... Some people say I look like a child, you know, Baby Jane. And, I mean, I don't know what I look like, I guess it's just 1964 Jewish."(KT166/162)

Jane Holzer had actually been nicknamed "Baby Jane" by a newspaper columnist after the film Who's Afraid of Baby Jane which had just been released.

Holzer was born Jane Brookenfeld on October 29, 1940. She grew up in Florida - her father, Carl Brookenfeld, was a wealthy real estate investor. When Warhol first met her, she had just married the real estate heir Leonard Holzer and lived with him in a twelve room apartment on Park Avenue.

In Popism, Warhol, via Pat Hackett, says that he met Jane twice before filming her. The first time was in Spring 1963 when Nicky Haslam (the editor of Show magazine at the time) took him to a dinner at Holzer's apartment. The dinner guests included David Bailey and Mick Jagger. Warhol then says that "the next time I ran into Jane, on Madison Avenue, she was just back from the big '63 summer in London..." According to Warhol, when he asked Jane if she would like to be in a movie, she responded, "Sure! Anything beats being a Park Avenue housewife." (POP58/59) Yet, she didn't make her first movie for Warhol until the following year - in 1964.

Jane's first Warhol film was Soap Opera. In an interview in the book, Unseen Warhol, Holzer recalls that after Soap Opera, she made a film where she was eating a banana and then a Kiss movie, followed by a Screen Test and then Batman Dracula. (UW49)

"The first movie Jane did for me was Soap Opera, filmed over P.J. Clarke's, the Third Avenue pub. It was subtitled The Lester Persky Story in tribute to Lester, who eventually became a movie producer. Lester introduced the hour-long commercial on television in the fifties that had Virginia Graham showing you all the different ways you could use Melmac, or Rock Hudson doing vacuum-cleaning demonstrations. Lester let us use footage from his old TV commercials, so we spliced sales-pitch demonstrations of rotisserie broilers and dishware in between the segments of Soap Opera."(POP60)

Batman Dracula was approximately two hours long and was filmed at a variety of locations - "the beaches of Long Island, a Grammercy Park apartment, various rooftops in Manhattan, and the Factory." (BN32).

The film also included an appearance by a newcomer to the Warhol scene - British artist Mark Lancaster:

"When Mark walked into the Factory for the first time, fresh from his student flight, he couldn't get over the fact that the 'lift' was silver and self-service and that the girl who had gotten on right after him, Baby Jane [Holzer] had this huge head of hair and these high little boots. We were right in the middle of shooting another scene for [Batman] Dracula. I was sitting on a couch with Jack Smith and Billy [Name]; and Rufus Collins, the dancer, and Ondine were around in the background, and Gerard [Malanga] and Jane... and Naomi Levine was darting around, looking very busy and excited. The first thing I asked Mark was did he want to be in the movie, and he said sure, then everybody started taking off their clothes. He got out of his suit and joined the group molding silver foil jock straps around their underwear... I ran the camera and did the zoom thing, and after we finished, everyone just sat around in foil for awhile. Then, as Mark remembers it, he thought, 'Well that was very nice.' and put his suit back on and came over to thank me for letting him come by. I just said, 'See you tomorrow'... so after that he kept coming back every afternoon, and since it was boring to just hang around, he began helping me stretch paintings."(POP71)

"That [referring to the film, Couch] was very famous in its time because people would come up [to the Factory]. You couldn't show it [in public]. It was before pornography was allowed, but it was the most famous of all the pornographic ones that he did: that one and the one he did in the toilet [a segment of Four Stars (1967)], which is hilarious, but Couch... People just come and fuck for 24 hours. It goes on forever... See, a lot of people would come up to see it... you debauch, you walk out and have coffee and then come back and watch the movie, which everyone did - because how much could you watch these people on a couch? But he [Warhol] would sit wrapped up with his legs crossed. And like a little child: just perfectly content. It wasn't a look of rapture so much as a perfect contentment that could just go on, and, I realized, could go on for hours and hours like that unless he was interrupted." (PS489)

"...I was involved in the avant-garde. You know: with Freddie Herko, Nick Cernovitch, LeMonte Young, Ray Johnson, and whatever... I was involved with those people - either a love relationship... or involved in a kind of certain personal-social relationship... we shared a common, ah heritage. You know: we had come from and been with and lived through and dealt with and were part of this scene. At that point, it began to be developed by Andy Warhol. But not because he was part of the scene, but simply because he... understood it... he threw a torch upon it... I really didn't even 'meet' him [Warhol]... I was at an orgy, and he was, ah this great presence in the back of the room. And this orgy was run by a friend of mine, and, so I said to this person, 'Would you please mind throwing that thing out of there?' And that thing was thrown out of there, and when he came up to me the next time, he said to me, 'Nobody has ever thrown me out of a party.' He said, 'You know? Don't you know who I am?' And I said, 'Well, I don't give a good flying fuck who you are. You just weren't there. You weren't involved'... and from that point on, we became, ah, really good friends." (PS425)

Although Couch was filmed in 1964, it was first shown publicly at the Filmmakers' Cinematheque in 1966 - on April 17, 1966. However, it was an edited version of the film, lasting less than an hour. The original 1964 footage consisted of "at least 50 reels, each lasting about 35 minutes", according to Ron Tavel. (PS569)

In the summer of 1964, Warhol bought a new movie camera - an Auricon that was capable of recording sync-sound directly on the film. Warhol's previous camera - the Bolex - had been silent. The first film he made with the new sound camera (in July 1964) was actually a silent film - Empire - an eight hour, 5 minute silent film of the Empire State Building. Warhol had originally intended the film to have a soundtrack of off-screen dialogue. His first sound film using the Auricon was made later in the year, in December 1964, using off-screen dialogue that was recorded in-camera during the actual filming. It was Harlot, starring Warhol's first transvestite superstar...