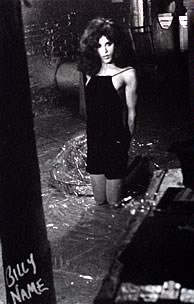 Mario Montez had previously appeared in Jack Smith's Normal Love and Flaming Creatures. He was actually a postal worker from Brooklyn.

Mario Montez... was in a lot of off-off-Broadway plays and doing a lot of underground acting for Jack Smith and Ron Rice and Jose Rodriguez-Soltero and Bill Vehr...

Jack Smith always said that Mario was his favourite underground actor because he could instantly capture the sympathy of the audience. And that was certainly true. He lived in constant fear that his family or the people in the civil service job where he worked would discover that he dressed up in drag. He told me that every night he prayed in his little apartment on the Lower East side for himself and his parents and for all the dead celebrities that he loved, like 'Linda Darnell and James Dean and Eleanor Roosevelt and Dorothy Dandridge'

Mario had that classic comedy combination of seeming dumb but being able to say the right things with perfect timing; just when you thought you were laughing at him, he'd turn it all around. A lot of the superstars had that special quality. (POP/91POP181)

Mario had previously appeared in Warhol's silent film Batman Dracula. He would go on to appear in numerous Warhol films (including The Chelsea Girls) but his most humorous performance was in Screen Test No. 2 which Warhol shot in January 1965.

In addition to the short (three minute plus) Screen Tests that Warhol filmed, Warhol also made three longer films called Screen Test No. 1, No. 2 and No. 3. Screen Test No. 2 with Mario Montez lasts 67 minutes. Mario sits in front the camera in drag, posing as a Warhol superstar wannabe, facing his off-screen interviewer - Ronald Tavel.

Tavel tells Montez that he is auditioning him for a role in Warhol's new film - The Hunchback of Notre Dame and asks him to repeat certain words and phrases - such as repeating the word "diarrhoea" in different ways. Tavel also asks Montez to give him different looks that express various "themes" and emotions. Montez is hilarious as he tries to convey the designated emotions, often acting as though he doesn't quite understand what Tavel is after, but willing to do anything to become a Warhol superstar. Toward the end of the film, Tavel tells him to take his cock out, which he apparently does, although it is not revealed on camera, which remains on Mario's face.

Warhol had met Ronald Tavel at the end of 1964 at a poetry reading he attended with Gerard Malanga at the Cafe Le Metro on Second Avenue. Also seated at Warhol's table was Bob Dylan. (NG) Tavel had worked as a prop man on Jack Smith's film, Flaming Creatures. Warhol needed someone to write scripts now that he owned a sync-sound movie camera. At the poetry reading, Andy noticed the "reams of paper" that Tavel was surrounded with during his reading and, impressed by "the sheer amount of stuff he'd evidently written", Warhol asked Tavel to write for him. (POP90)

"Ronnie Tavel appeared for the Harlot shooting and he and a couple of other people just talked normally off-camera. Sometimes the talk was about what we were shooting and other times it wasn't - I loved the effect of having unrelated dialogue. After that Ronnie did quite a few scenarios for us - The Life of Juanita Castro, Horse, Vinyl, The Fourteen-Year-Old-Girl, Hedy (The Shoplifter), Lupe, Kitchen and others. I enjoyed working with him because he understood instantly when I'd say things like 'I want it simple and plastic and white.' Not everyone can think in an abstract way, but Ronnie could." (POP91)

Tavel's scenarios were used as a starting point for the films - much of the dialogue and action was improvised. Prior to Harlot, all of Warhol's films were silent. Some sound footage from television commercials had been edited into Soap Opera, but the original footage was silent.

Warhol's new sound camera would enable him to focus more on a narrative style of filmmaking. Shooting with sound would also make his films more accessible to the general public. Jane Holzer was really a superstar of Warhol's silent films. She would appear in the sound film Camp in October 1965 but by that time her stardom had already been eclipsed by the arrival at the Factory of Warhol's next superstar: Edie Sedgwick.