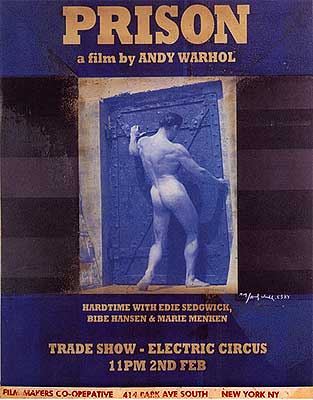 Andy Warhol decided to make Prison (aka Girls in Prison (BN54) or Jail (PS488)) after Bibbe Hansen told him about her experiences in jail. In addition to Bibbe Hansen, the cast includes Edie Sedgwick, Marie Menken, Pat Hartley and Sandy Kirkland. Buddy Wirtschafter was the sound technician for the film. The sound was recorded on a separate soundtrack.

Buddy Wirtschafter (The Autobiography and Sex Life of Andy Warhol):

"I [first] worked on his [Warhol's] first color film, in which Ondine and someone else were mushing in fruit, and all you would see would be their hands mushing in fruit. It was Ronnie Tavel and several people, and the whole dialogue was going on while hands - it was static shot - were mushing, squeezing, mauling different types of fruits and vegetables. It was in the Factory and I don't think he ever released it. Then immediately after that, he started on a period of scripted epics like Horse and The Dreams and Lives of Winnie DeFranco. We were doing a film a day. I think the next one that came up was either Horse or Prison; it was a Ronnie Tavel script."

As Wirtschafter mentions a Ronald Tavel script, the next film "that came up" was probably Horse - indicating that Prison was filmed after Horse. According to the Mekas/Koch film chronology, Horse was filmed in March 1965 and Prison in July 1965. Although Ronald Tavel has sometimes been credited as the scriptwriter for Prison, he actually did not write the script. He later recalled telling Warhol that it was "lying" to credit him with with being the screenwriter of the film.

"There's a film called Jail [Prison], and you see me as the scriptwriter, and I did not [write the script]. It was something that was one of his policies, in a sense, inevitably. You were connected with him. 'But,' I said, 'That's lying. If you want to give me credit, give it as an actor.' 'But when you're in it, ' [Warhol said], 'in whatever way, you're directing from within,' which was in our terms: writer. What makes something and you shoot it. [Imitating Warhol]: 'Oh are you directing more so than any other actor, particularly the way you're improvising? Any actor can pull it in a directorial direction.' And then, I finally said, 'It's not what I don't want, my name as the script writer.' I had enough of that garbage." (PS488) 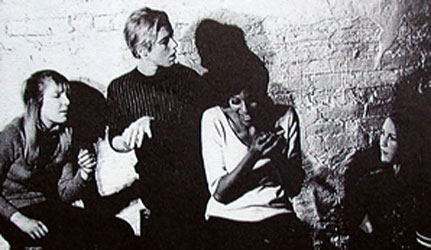 The film also included Pat Hartley who later went on to appear in Rainbow Bridge, starring Jimi Hendrix and directed by Chuck Wein. Warhol did not use a lot of black or mixed-race actors and actresses in his films but there were some. In addition to Pat Hartley, there was Dorothy Dean (My Hustler), Abigail Rosen (Tub Girls), Rufus Collins (Couch) and super-model Donyale Luna (Camp).

"I liked to dance a lot and the music [at the Factory] wasn't very good. So, unless I was actually engaged in an activity, it wasn't very interesting just sitting there watching other people doing things. You could dance around, but I also didn't care for people who couldn't dance very well... I really wanted to be out dancing; this was a sort of stop on the way to do that...I wasn't an artist, I'm not a painter, I always wanted to be a movie star. Suddenly the camera appeared, and Ooh, I thought, this will be an extra. The only only reason I was there is that it was something special, something was actually happening, and that generated a lot of excitement. Was it going to happen? When was it going to happen? ... My feeling was one thought a lot of things were going to happen, and I'm actually stunned at the things that didn't get made, the things that didn't happen." (VY57-8)

Prison is yet to be restored. According to Jonas Mekas, it has rarely been shown and "exists in original only". (SG146) Mekas describes the film as follows:

"Edie and Bibbe are sitting on a box in a bare room, Bibbe telling her jail experiences. Marie brings coffee. Women guards come in and rob them of all their belongings. The camera is static." (BN54)