After the run at the Cinema Rendezvous, The Chelsea Girls opened at the Regency at the beginning of 1967 - "Released through The Film-Makers' Distribution Center." 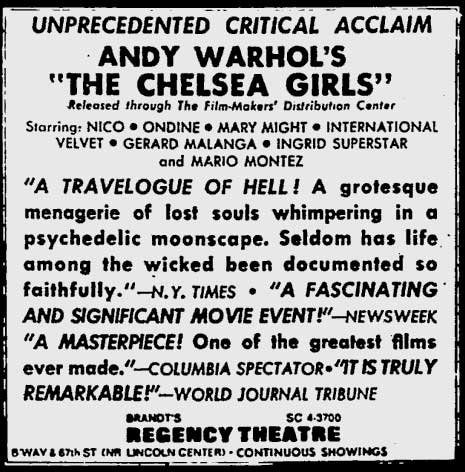 In the same January 5th issue, there was an ad for the Film-Makers' Cinematheque at the 41st St. Theatre at which Bob Neuwirth was presenting "film comedies" starring Edie Sedgwick who was referred to as "a real Chaplin." 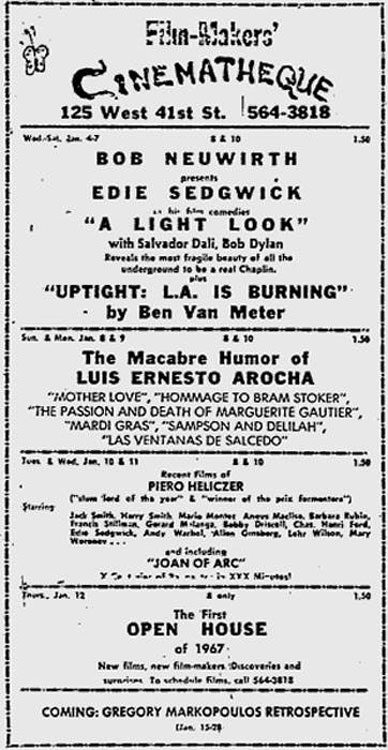 According to Popism, one of Edie's complaints to Warhol in 1965 was that everyone was laughing at her because of her appearances in his films:

"During the summer and fall [of 1965], Edie started saying she was unhappy being in underground movies. One night she asked Mel and me to meet her at the Russian Tea Room for a 'conference.' She wanted him to arbitrate while she explained to me how she felt about her career... That night she said she'd decided that she definitely was going to quit doing movies for the Factory.

Jonas Mekas had just offered us a lot of consecutive nights' screenings at the Cinematheque to do whatever we wanted with, and we thought it would be fabulous to have an Edie Sedgwick Retrospective - meaning, all of her films from the last eight months. When we'd first thought of it, we all thought it was hilarious, including Edie. In fact, I think Edie was the one who thought of it. But now, this night at dinner, she was claiming that we only wanted to make a fool out of her. The waiter moved the Moscow Mules astride and put our dinners down, but Edie pushed the plate aside and lit up a cigarette.

'Everybody in New York is laughing at me,' she said. 'I'm too embarrassed to even leave my apartment. These movies are making a completely fool out of me!'"

And yet, here, was her boyfriend/manager Bob Neuwirth presenting her as a comedian in an ad in the Village Voice.

The ad also mentions an "Open House" where filmmakers could bring their films to be screened. But, again, this was not a midnight screening, but took place at 8 pm.

On February 2nd, The Chelsea Girls moved to the York Cinema - again released through the Film-Makers' Distribution Center, as stated on the ad: 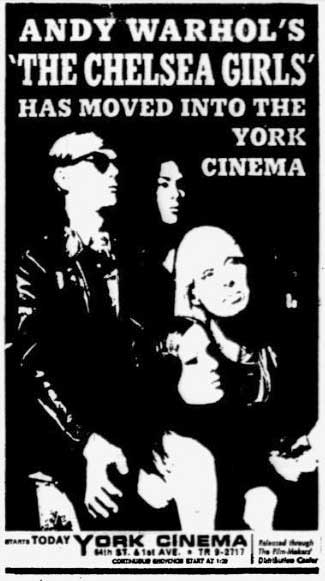 By April, The Chelsea Girls was at the St. Marks Theatre: 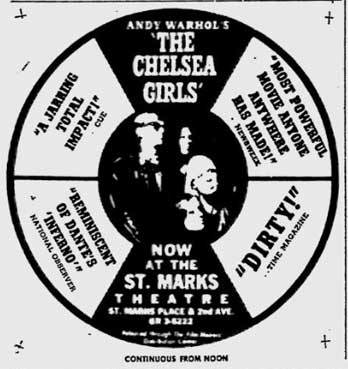 In addition to showing Warhol's major films like The Chelsea Girls (and later in the year, **** (Four Stars), through the Film-Makers' Distribution Center, Mekas continued to show Warhol films at the "Cinematheque" then operating out of the 41St. Theatre. Below is an ad from the 27 April issue which includes Willard Maas' film, Andy Warhol's Silver Flotations and an Open House at 8 pm.

And below is an ad from July 1967 which includes screenings of Warhol's Vinyl, Poor Little Rich Girl, Camp plus Bruce Torbet's documentary on the artist, Superartist:

Later in July, an ad appeared which indicated that the 41st St. Theatre was being used both for the Cinematheque screenings and for the Film Distribution Center:

The ad is interesting for several reasons. First is the inclusion of Gerard Malanga's film. At the same time that Warhol was making underground films, Gerard started making his own films - this one featuring Rene Ricard, International Velvet and what looks like "Chase Mellon." (I've been unable to find much on the net about a Chase Mellon, although there was a Chase Mellon III who owned a Beverly Hills mansion that Sly of Sly and the Family Stone started renting from him in 1993. I have no idea if that is the same Chase Mellon - if anyone knows who Mellon is, email me at garycom.now@gmail.com.)

Although the bottom half of the ad includes releases by the Filmmakers Distribution Center, Mekas did not announce the formation of the FDC until the 7 September issue of the Village Voice (see below). The stated purpose of the FDC was to distribute films that had a wider public appeal than most of the underground films shown by Mekas at his Cinematheque.

In August of 1967, Mekas was still using the 41st St. Theatre as his Cinematheque. He screened a week of films by Marie Menken and her partner, Willard Maas. (According to Gerard Malanga, Maas was the unseen person giving the blow job in Warhol's film Blow Job.)

In the 7 September 1967 issue of the Village Voice, an ad announced that the 41st St. Theatre would be renamed the 42nd Street Cinema and would be used by an offshoot of the Film-Makers' Co-op, "the Film-Makers Distribution Center," to show films that "have a need (according to the film-makers' wishes) of wider audiences..." Later, the name of "New Cinema Playhouse" would also be used for the venue.

According to the ad, two other venues would be used as the Film-Makers' Cinematheque - Cinematheque I at Wooster Street for anyone who wanted to show their films and Cinematheque II which would show "carefully selected" films. 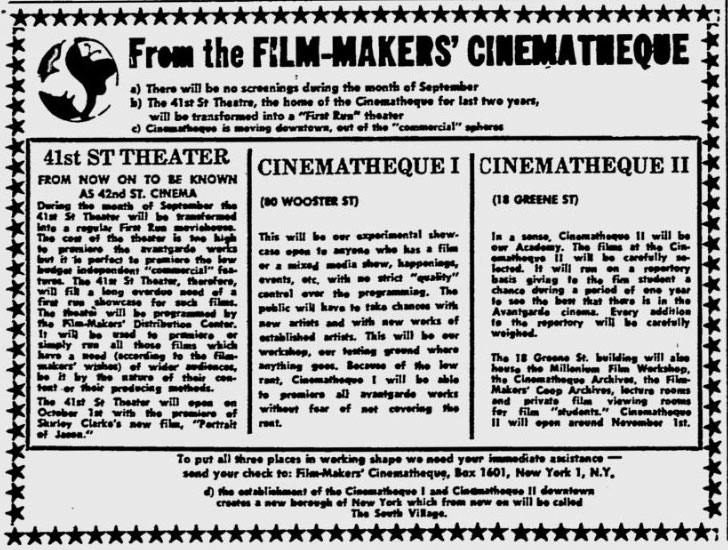 The Fluxus artist George Maciunas (who was, like Mekas, a Lithuanian refugee) had purchased all or part of the buildings at 16-18 Greene Street and 80 Wooster Street for use as artists' co-ops.

"Avant-garde art was radically changing the cultural landscape of New York City and the artistic centers of Europe. But in New York, artists were not able to earn enough money to live and work. Apartment prices were too high for most artists, who also needed to rent additional space in which to create their art works. Indeed, without viable live-work space, there would be no art. Maciunas came up with a brilliant vision: cooperative loft living.

Maciunas loved manifestos. For his new project he published a one-page manifesto titled A FLUXHOUSE PLAN FOR AN ARTIST CONDOMINIUM IN NEW YORK CITY. In it he set forth the economic problem facing artists and proposed a solution. He envisioned purchasing under utilized loft buildings through a not-for-profit cooperation and renovating them to provide living-work spaces for artists... The first building, 16-18 Greene Street was to become Fluxhouse Cooperative I. His second planned co-op at 80 Wooster Street was designated Fluxhouse Cooperative II..." (RB45-47)

Although 80 Wooster Street would remain a Fluxhouse Cooperative, Maciunias had apparently only purchased "four spaces" in Greene Street. After residents became irate over Maciunias' failure to pay real estate taxes, they unaffiliated themselves with him through their solicitor.

"Inevitably there were problems. After a short time, the 16-18 Greene Street building, which was to have been Fluxhouse No. 1, discontinued its relationship with Maciunas. Although she acknowledges that Maciunas was involved with their building, Ingrid Wiegand, who with her husband Bob was an original owner in the Greene Street building and a political activist, says without hesitation: 'The building was never a Fluxhouse; it was always the Greene Street Precinct.' However, Maciunas still controlled ownership of four spaces in the building, which he purchased with money from his sister. He rented them out to his workers...

When they discovered that Maciunas had not paid the building's real estate taxes and owned money to his workmen, the Greene Street residents became irate... Bob Markowich, the lawyer for the cooperative women's gallery A.I.R. on Wooster and Broome Streets... engineered the separation from Maciunas and got the Greene Street building reorganized to form a true residential co-op unaffiliated with the Fluxhouses." (RB54)

Although the Village Voice ad above indicates that the Greene Street location was to be an "Academy" where the best of the avant-garde cinema would be shown - a bit like the later Anthology Film Archives - it never happened.

"Only one of the new spaces was ever created: Cinematheque I at 80 Wooster Street, an address that was to become identified with the brave, the bold, and the risky in film and the arts. Although Mekas planned to have 260 seats, he could not obtain the special permit needed for a public assembly of that size, so the new theater had only 72 seats. (RB75)

Mekas didn't immediately use the venue at Wooster Street because it apparently needed extensive refurbishment. According to his chronology ("Showcases I Ran in the Sixties" in To Free the Cinema) he didn't start using Wooster Street until early 1968, although Village Voice ads indicate that the first showings were in December 1967 (see below) .

Mekas also continued to release films through the Film-Makers' Distribution Center. On 14 December, 1967 an ad appeared in the Village Voice for the one and only showing of Warhol's "25 hour film" **** (Four Stars) on Friday 15 December 1967 at the New Cinema Playhouse at 120 West 42nd Street. 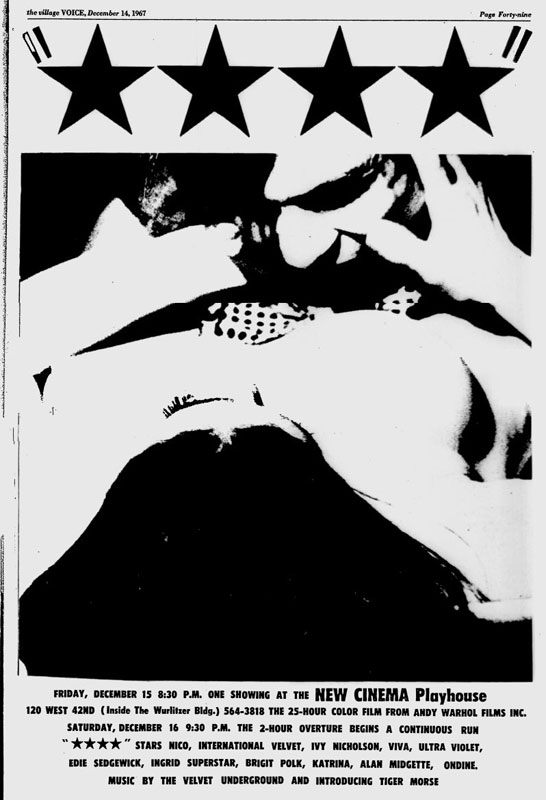 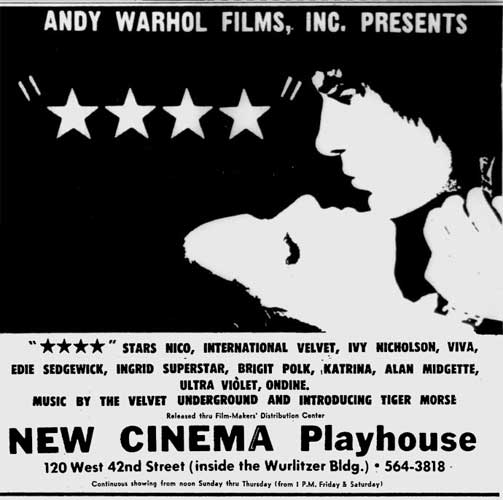 In the same issue of the Voice that carried the ad for the full version of **** (Four Stars), Mekas announced the opening of Wooster Street. 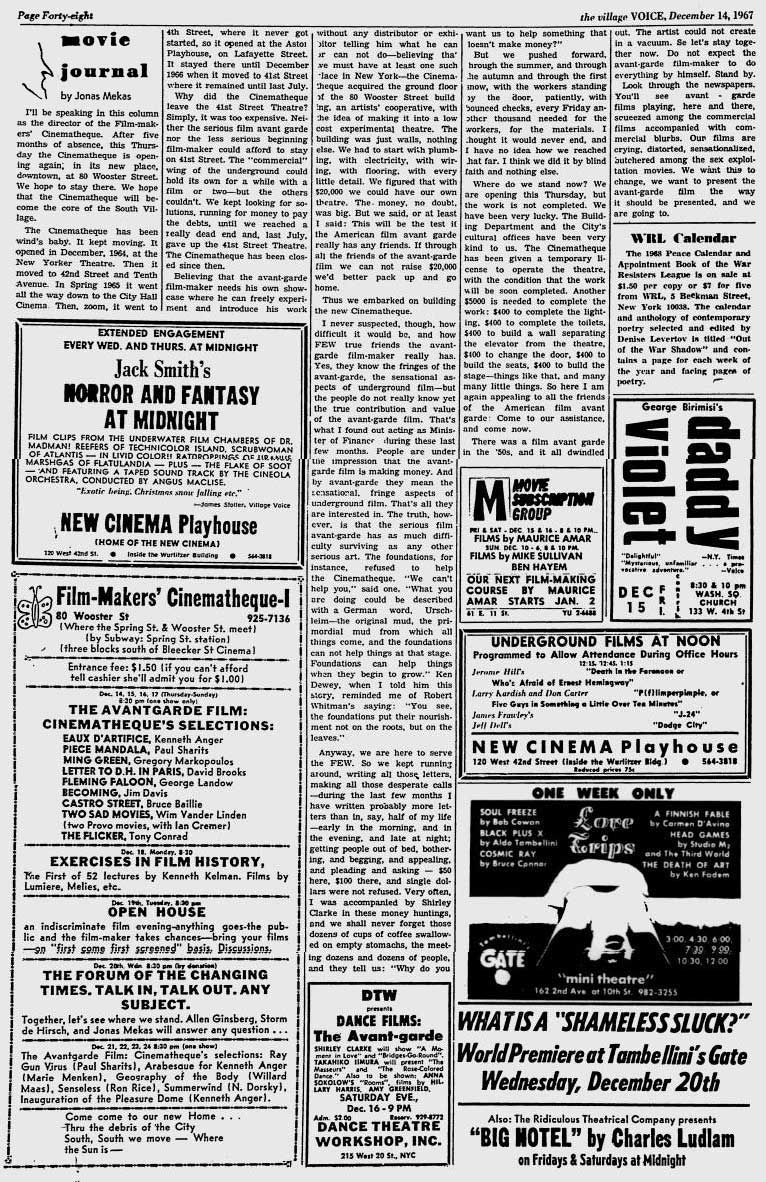 The Wooster Street Cinematheque actually opened in December 1967 as the ad on the lower left corner of the above page from The Village Voice shows, as well as the ad at the bottom of this page.

Meanwhile, in the same issue (14 December) an ad appeared for "Underground Films at Noon" at the New Cinema Playhouse, although there is no indication that Mekas had anything to do with these screenings: 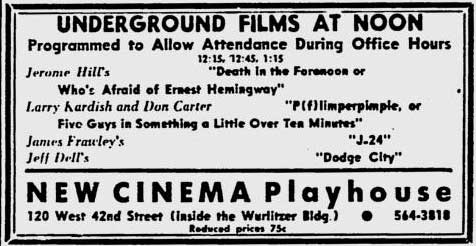 The account that Mekas gives of his venues in his column in the 14 December issue does not always agree with what was advertised in the Voice. He writes that the Cinematheque opened in December 1964 at the New Yorker Theatre. This agrees with the ads more or less - the 26 November 1964 Village Voice ad (above) gave the first screenings as 30 November. The films on the 30th included Andy Warhol's Newsreel.

Mekas continues by writing that after the New Yorker, the Cinematheque "moved to 42nd Street and Tenth Avenue." This was presumably the Maidman Theatre which was located at 416 West 42nd Street. As noted earlier, Mekas wrote in his chronology of showcases - "Showcases I Ran in the Sixties" - that screenings were held at the Maidman from January 18th to the 26th." [See page three for Maidman schedule.]

Mekas goes on to write, "In Spring 1965 it [the Cinematheque] went all the way down to the City Hall Cinema." This, again, more or less agrees with the Voice ads - the first ad for the City Hall Cinema was for the February 4th showing of Mekas' film Guns of the Trees. Mekas continues: "Then zoom, it went to 4th Street, where it never got started [see page three], so it opened at the Astor Playhouse, on Lafayette Street." 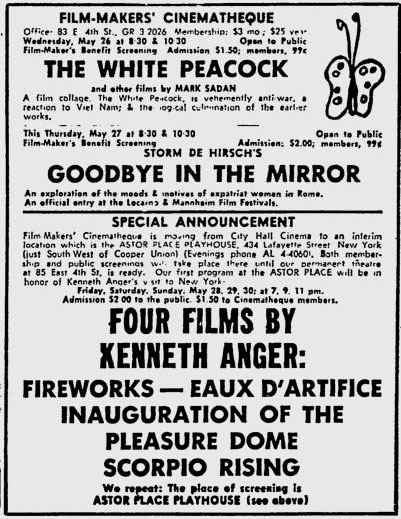 Mekas continues "it stayed there until December 1966 when it moved to 41st Street where it remained until last July." According to Mekas, the Cinematheque "has been closed since then." But there were advertised Cinematheque screenings after July. In addition to the Menken/Maas screenings in the ad reproduced above for August, there was also a screening on August 17th, as per the ad below: 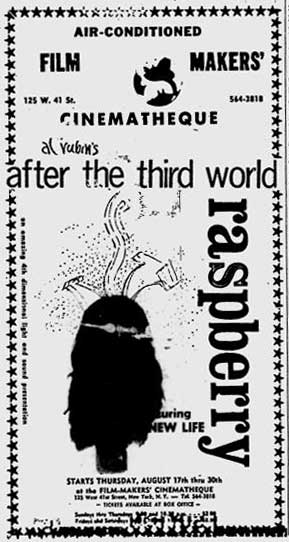 Although Mekas' column might give the reader the impression that there was a dearth of experimental or independent screenings as a result of him no longer using the 41st St. Theatre as his Cinematheque, the venue continued to show experimental films, including the work of Jack Smith, under the name "New Cinema Playhouse." 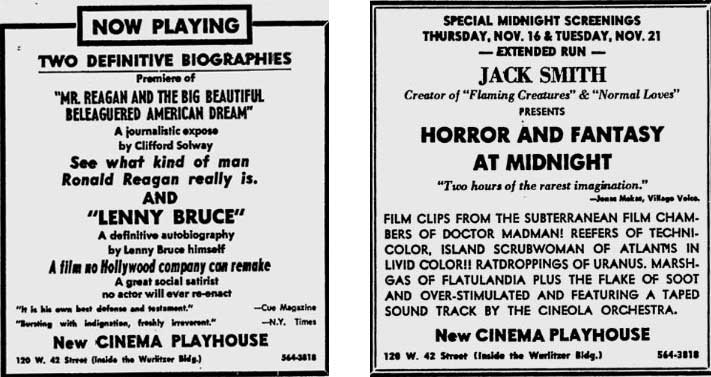 The above ads don't mention any of Mekas' entities (i.e. the Film-Makers' Distribution Center or the Cinematheque) but Mekas was a champion of Smith's work and the ad does quote him. Later in the month, a similarly designed ad for a Shirley Clarke screening, along with the Lenny Bruce film, appeared in the Voice which did indicate that it was an FDC evening. 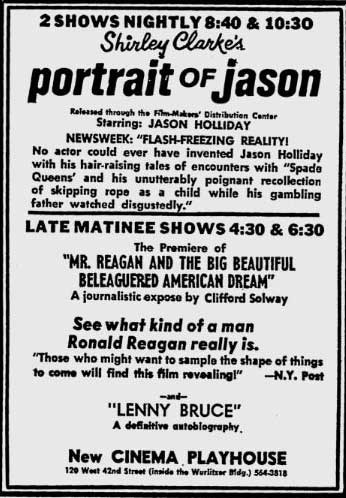 Although the FDC screenings are of interest because they had to do with Mekas, they weren't considered "Cinematheque" screenings. We've already seen that there was an ad for the Cinematheque I (Wooster St.) on the same page as Mekas' column above (see the ad for 14 December above). In the following issue, there was a much more professionally designed ad for the venue which gave the December 1967 schedule: 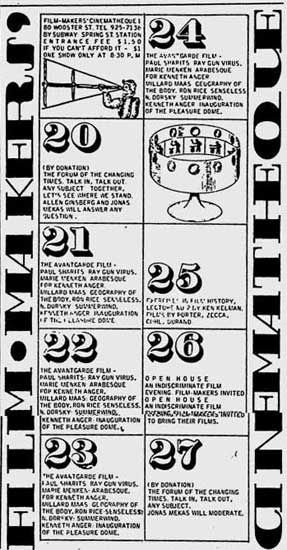