John Giorno at the Museum of Modern Art 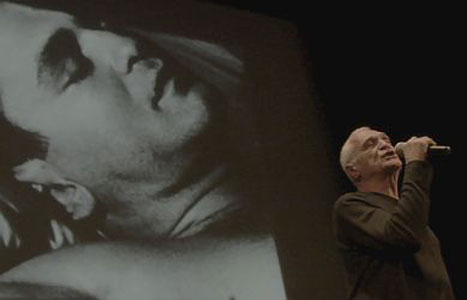 John Giorno, star of Sleep, participated in a panel discussion at the Museum of Modern Art on Thursday 4 March 2011 in conjunction with their Motion Pictures exhibition. The discussion was moderated by the director of MoMA PS1 and curator of the show, Klaus Biesenbach. The discussion was followed by a performance of his poetry by Giorno. Warhol star (and Warhol Screen Test subject) Bibbe Hansen also attended.

The exhibition continues until 21 March 2011.

I Am from Nowhere

The excellent George Misch film about Warhol (more or less), I Am From Nowhere, is going to be shown in New York on 16 March as part of Kinofest NYC. Photos by Anton Perich and Sebastian Piras will also be exhibited. Misch's film is one of my favourites - highly recommended. (Produced in association with the BBC.)

The exhibition "Warhol and Cars: American Icons" opens on 6 March at the Montclair Art Museum in New Jersey. The show will highlight Warhol's early early painting Twelve Cadillacs (1962) within the context of 35–40 other works on loan from the Warhol Museum in Pittsburgh. Also on exhibit will be Warhol's recently discovered maquette for a 1978 BMW racing car and works from his Disaster series. 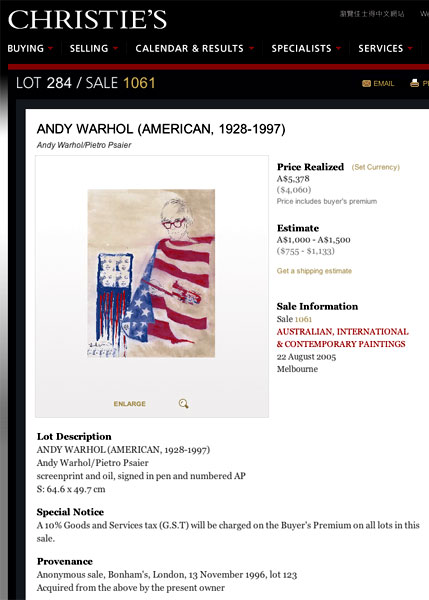 An article on vintage shops in Madrid that appeared in the "El Viajero" section of the Spanish newspaper, El País, on Saturday 12 February refers to a shop called L.A. Studio which is, according to the article, selling "an interesting collection of works by Warhol collaborator, Pietro Psaier" in Madrid.

As regular readers of this site will know, I first came across the claim that Psaier had collaborated with Warhol on "joint works" of art over two years ago in a press release issued by John Nicholson Auctioneers. Not only was it claimed by Nicholson and Psaier "researcher" Jacqueline Chapman that Psaier and Warhol were both lovers and collaborators, works were also being sold stamped with a "Factory Additions" stamp - the name of the company that sold Warhol's prints from 1966 - 1974. Last month I wrote a further update on the situation here.

A Wikipedia biography of the artist was removed after nobody could come up with any evidence that the artist actually existed, let alone collaborated with Warhol. No birth certificate has ever been produced for Psaier and documents distributed with the works alleging to be probate papers issued by the State of California were shown to be forgeries. (See "Pietro Psaier.")

Christie's, Bonhams and Phillips du Pury have all sold works by Psaier.

The mention of Psaier in the El País article article can be found here.