The information was included as a link from the original Studio Psaier website. You will find it here.

The item listed was no. 7123 and was described as "Pietro Psaier "Damaged Lives": Marilyn in Hollywood," with a price of "400." The sale was "Sunset Estates Auction, Sunset Sale 7347T"

2003: BOOK OR BOOKS ON WARHOL & PSAIER ARE PUBLISHED IN SPAIN.

The listing for Andy Warhol & Pietro Psaier : The Factory, New York indicates that it was published in the city of Valladolid in north-central Spain - part of the autonomous region of Castile and León. It appears to be a 30 page exhibition catalogue. There would be an exhibition at Valladolid October 5 - November 5 in 2006 by the same name (or a similar one) which apparently also ran in other cities in Spain (see below), but the publication date given for the book is 2003.

The publication city listed for Andy Warhol, Pietro Psaier and the factory: pop icons is Lugo - a city in northwestern Spain in the autonomous community of Galicia which borders Castile and León. It was apparently the exhibition catalog for the show in Lugo detailed below.

Details listed below from here. 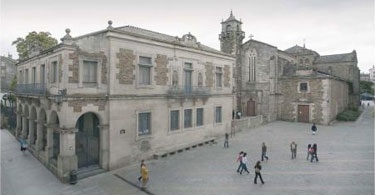 The exhibition took place at the Museo Provincial de Lugo. The 2nd book listed above was the 99 page exhibition catalogue for the show. A catalogue listing for the book can be found at here.

This is a rough translation of what Enrique Castillo Pesado said about the exhibtion on the Radio Formula website in 2003:

It seems incredible that in a city as traditional and historical as Lugo, Spain, the work of an artist as contemporary and controversial as Andy Warhol is the subject of a formal tribute. To mark the 75th anniversary of the birth of the Pop Art celebrity, who died in 1987, Encarnación Lago, director del Museo Provincial, organized the show "Andy Warhol, Pietro Psaier & The Factory. Iconos pop." An integrated sample of some 50 works, including oil paintings and serigraphs, signed by Warhol and Psaier, closed a few days ago. Psaier worked at The Factory, namely the study, factory and workshop in New York of Warhol. His first shows outside of that workshop were in Spain where he had an unusual success; thereafter he gained fame and prestige that would lead years later to his native Italy to found the Center of Art and Design...

The untranslated text can be found here.

The above is the first mention I have seen of Psaier founding the "Centre of Art and Design" in Italy. (Can anyone find a website for the centre?) The exhibition included an electric chair as noted in this press report from the October 31, 2003 issue of La Voz de Galicia:

Finally, the exhibition includes a series of works on the death penalty surrounding one of the most precious pieces, an electric chair from the thirties that Psaier rented to Warhol, and from which the American artist ironically watched horror films, and which was used in the shooting of one of his films, Flesh for Frankenstein. Legend has it that filmmaker Roman Polanski and singer Nico tested the electric chair by using it to fry a fillet. The electric chair was exhibited in a show that Psaier held in Alcatraz Prison in 1985, and after Warhol's death, the chair was returned to the Italian artist's personal collection until it was acquired by Atlántica, the art center of Coruña.

This is the first claim I've seen of an exhibtion at Alcatraz Prison in 1985. I don't recall a 1930s electric chair in Flesh for Frankenstein and strongly doubt that Nico and Roman Polanski tested the chair by frying a fillet in it!

At some point in 2004 a film was added to the original site with a file name of "cruzifiction gallery." You will find it here.

By February 2, 2005 a "Studio Psaier Biography of Peter Psaier" was added to the site. It's interesting to note that it was a biography (actually a chronology) of "Peter" Psaier, not "Pietro." You will find it here.

Here is what was listed under the various years [originally spelling errors intact]:

JULY 3, 2004: STUDIO PSAIER HAS AN OPENING PARTY IN LOS ANGELES.

The party was apparently held at the Galaxy Gallery on Melrose Avenue, Los Angeles. A notice was listed here.

The Full House Series Gallery is a collection of large canvas Paintings by Peter Psaier. This gallery is focused on American Pop Icons like Bettie Page and James Dean adorning a deck of 52 playing cards. Mixed media screenprint and acrylic artwork painted in the sultry American Pop style characteristic of the Studio Psaier.
This gallery runs: 7/03 thru 7/10

Consisting of 34 works of art, the exhibition was referred to as "A representative sample of the work of the founder of Pop Art, Andy Warhol, and one of his students, Pietro Psaier..." (see English translation of page below): 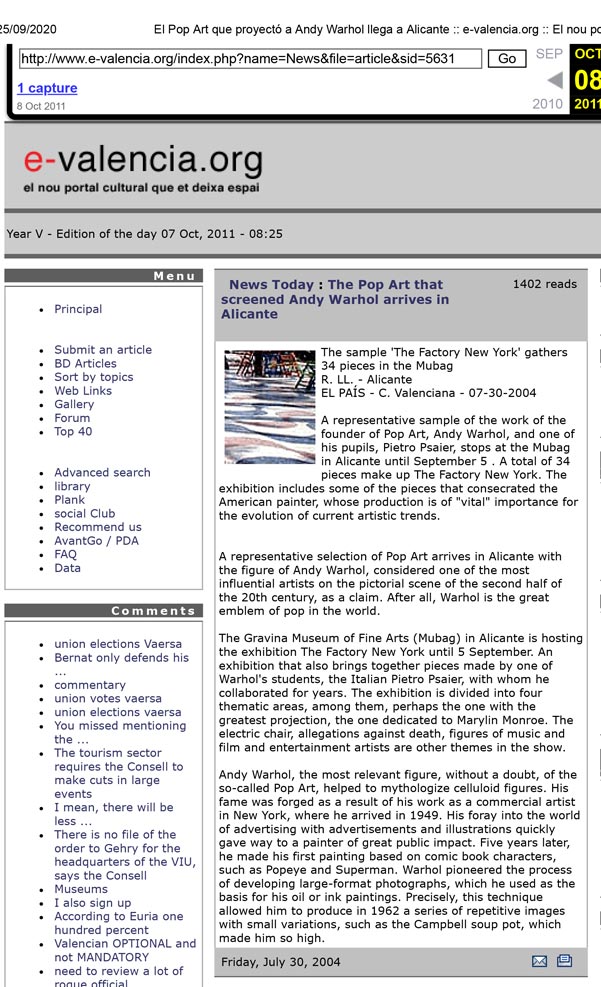 The exhibition was accompanied by a "catalogue" that looked like this: 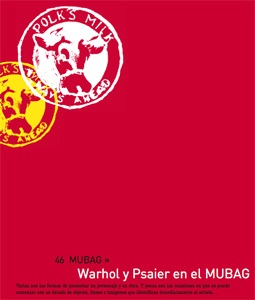 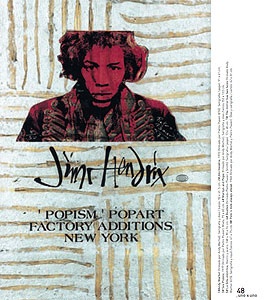 In their "Pick of This Week's Sales," on August 1, 2004 the Mail on Sunday noted the following:

These days an early black and-white photo of the Rolling Stones (including ill-fated Brian Jones) causes more palpitations in the saleroom than your average Victorian watercolour. So good news for trendsetters TW Gaze & Son in Diss, Norfolk, which has the second of its two annual film and pop memorabilia sales this Saturday (including snaps of Jagger et al, in at £200 to £300 each). Pop leads the way: with everything from Yellow Submarine postcards to punk rock 'artefacts'. But they've branched out into pop art, too, with 18 prints by Pietro Psaier and Jin Meisheng from a collection of Shanghai advertising and calendar artwork - great oriental kitsch - about £200 apiece. Call 01379 650306.

c. SEPTEMBER 22, 2004: AN ELECTRIC CHAIR ALLEGED TO HAVE A WARHOL CONNECTION IS OFFERED ON EBAY.

The Category number was 75295. The Item number was 3750271728. I received an email on the 22nd with a link to the item, but did not save the Ebay page. I remember thinking that the allegations regarding the connection with Warhol were strange, particularly given that the chair was completely different than the electric chair in Warhol's paintings. The item was re-listed on Ebay by October 15, 2004. It is not known whether or not the item was sold and whether or not it had anything to do with the Psaier electric chair.

SEPTEMBER 2004: PIETRO PSAIER IS ASKED BY OUR LADY OF MALIBU CHURCH IN MALIBU TO EXHIBIT PSAIER'S THE PASSION OF THE CHRIST?

According to the current John Nicholsons press release (advertising the auction in September 2008), "In September 2004, Pietro Psaier was asked by Our Lady of Malibu Church, high above the Malibu coastline to exhibit his highly acclaimed The Passion of the Christ." (Nicholson's would sell this work in December 2006.)

I emailed the church on August 22nd regarding the claim on the press release and received the following reply on the 24th of August from Reverend William F. Kerze, "I have been Pastor of Our Lady of Malibu church for the past twelve years and I have no recollection of any such exhibition or request."

[To view Bonhams items you need to enter Psaier in Item Search, then click on Find. When you get to the next page, use the drop down menu to choose "Lots in past sales" and indicate "Earliest sale date" as January 2003 (the earliest date available).]

The work allegedly by Pietro Psaier was sold at Bonhams on New Bond Street in their Modern and Contemporary Art sale (Sale 11502) and is described as follows:

DECEMBER 26, 2004: PIETRO PSAIER IS ALLEGED TO HAVE DIED IN THE TSUNAMI.

According to the article in Art in London (see below) and the press releases issued by John Nicholson, Pietro Psaier died in the Tsunami and his body was never found. 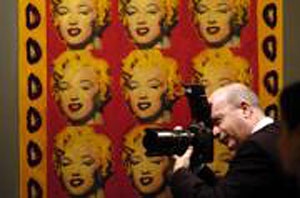 "ArteSevilla, contemporary art fair to be held in the Congress and Exhibition Center of the Andalusian capital until day 17, opened its doors yesterday with an outstanding claim: an exhibition of Andy Warhol. The exhibition includes an electric chair from the 1930s which appears in a number of works by the king of pop art as well as 33 large-format graphic works...

The exhibition "The Factory. Andy Warhol and Pietro Psaier" is displayed for the first time in Andalusia and is owned by a gallery owner from Coruña, Salvador Corroto. 'They are works that we have acquired for 20 years and reflect the work of The Factory, an area in which Warhol was always surrounded by other creators of various fields. Of the above, about 20 are exclusively Warhol and the rest are collaborations with Pietro Psaier,' said Salvador Corroto, director of the Atlántica Gallery, yesterday.

Portraits of Jimi Hendrix, Beatles, Mick Jagger, Marilyn at 12 frames and Sex Pistols accompany the electric chair that Warhol and Psaier utilized in works such as Multi RIP chair (1977) or Shocking Art (1989).

'It's an electric chair from the 1930s... One is at the Museum of Science in London, another in another museum in New York and the latter bought by Psaier. The important thing is that through constant repetition of the chair, artists removed the object from its context and achieved its purpose: to make it the biggest argument against the death penalty, ' added Corroto."

The item was described as follows:

Works alleged to be by Pietro Psaier were sold/offered at Bonhams (Knightsbridge) in their Vision 21 Sale (Sale 11643). Partial descriptions are as follows:

A work allegedly by Psaier was sold at Bonhams (Knightsbridge) in their Rock n' Roll & Film Memorabilia including James Bond sale (Sale no. 11808) as partially described below:

Lot No: 766/ Pietro Psaier: 'War Is Over - If You Want It'/oil on canvas, signed, reverse signed and inscribed by the artist and with Studio Psaier-New York certificate reading Lennon Study For New York City Subway/Artist Proof. Unpublished Achive (sic). Title War Is Over. Painted in Soho, New York for Giffin Records (sic)/Sold for £1,080 inclusive of Buyer's Premium

DECEMBER 5 - DECEMBER 15, 2005: PSAIER IS LISTED AS ONE OF THE "ARTISTI CORRELATI" FOR BLINDARTE (NAPLES) SALE ON TEKNEMEDIA.NET

Although the press release has been taken off the web, the Google listing remains as follows: