Tarzan and Jane Regained, Sort Of.... 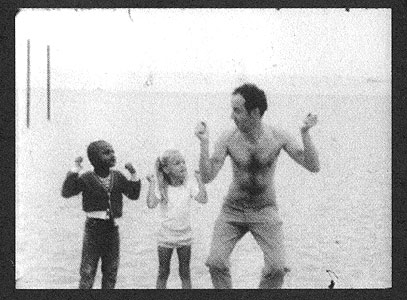 The correct way to write the title of this film is as above - Tarzan and Jane Regained, Sort Of..., as per the first volume of the Warhol film catalogue raisonné. You may see it written otherwise, as in Popism for instance, where it appears without the dots as Tarzan and Jane, Regained Sort Of. I assume that the title is a reference to Proust's Le Temps retrouvé. Warhol had previously paid tribute to Proust when he named one of his self-published portfolios À la Recherche du Shoe Perdu. (See Ralph Pomeroy.)

Footage for Tarzan and Jane Regained, Sort Of... was shot during Warhol's cross-county trip to Los Angeles during his second exhibition at the Ferus - the same trip during which he filmed the footage for Elvis at Ferus. Locations included Hollywood, Malibu, Venice, Pasadena, Topanga Canyon, the Santa Monica pier and the Beverly Hills Hotel.

During a two-week sojourn in Los Angeles, Warhol used his newly bought camera to shoot his first partially scripted feature, a playful take on Hollywood adventure movies. Tarzan, played by underground star Taylor Mead, is seen in a series of loosely connected episodes. He exercises on Venice Beach, bathes with a completely naked Jane - actress Naomi Levine - in a bathtub at the Beverly Hills Hotel, and later has to rescue her. Meanwhile, he meets Claes Oldenburg and has a manhood contest with Dennis Hopper. (0V01.40.00)

Naomi Levine, referred to as an "actress" in the above quote, was also an underground filmmaker. She had made her own way to Los Angeles, independently of Warhol and his entourage, under the pretense of raising money for Jonas Mekas’ Film-Makers’ Co-op. Taylor and Gerard Malanga claimed that she had flown out because she was in love with Andy.

... we did some filming at John [Houseman]'s house, where we met Jack Larson, who'd been Jimmy Olsen on television's Superman and who at this point was writing operas. We all went down to the pool and Naomi took her clothes right off and jumped in the water. Taylor was supposed to climb a tree but he couldn't, so he yelled for a stunt man. Dennis appeared and climbed the tree to get a coconut for him. (When Taylor saw the rushes back in new York, he said, 'you know I've always liked Dennis's acting, but it's usually so rigid. This is the most relaxed on camera I've ever seen him'...) (POP44)

The "Dennis" in the above quote was Dennis Hopper who later appeared in Easy Rider and had a small role in Tarzan and Jane Regained.

While in Los Angeles Warhol met Denis Deegan who later introduced him to Nico.

Warhol apparently first met the red-haired actor and model Denis Deegan in Los Angeles in the fall of 1963, when Deegan was instrumental in arranging for some scenes in Warhol's film Tarzan and Jane Regained, Sort of... to be shot at the home of actor John Houseman. Two early pre-Screen Test portrait films of a bare-chested Deegan may have been shot in California at this time... Deegan then moved to Paris where he lived for the next two years, and were, in 1965, he introduced Warhol to Nico... After his return to New York in 1966, Deegan starred in several color sound sequences shot that fall: Dentist: Nico, Ivy, Denis and Ivy and Denis I and II. (AD61)

Taylor Mead edited Tarzan when they returned to New York - creating a separate soundtrack with his own narration and musical arrangements. (AD126) It was screened in Jerome Hill’s suite in the Algonquin Hotel. Jerome was the the wealthy grandson of a railroad magnate who supported the arts through his private foundation and also made his own 16mm films (sometimes starring Taylor Mead). (POP43-6) Jerome Hill and his "companion" Charles Rydell would later become financial backers of Interview magazine. Andy Warhol also asked Charles Rydell to be the subject of his movie Blow Job. Although Rydell did initially agree, he thought Andy was only joking and never appeared for the shoot.

In the pre-porn days of the 1950s Tarzan was a gay icon. When Gordon Scott (who played Tarzan 1955-60) died in 2007, Warhol's ex-scriptwriter Ronald Tavel wrote an obituary which can be found here. 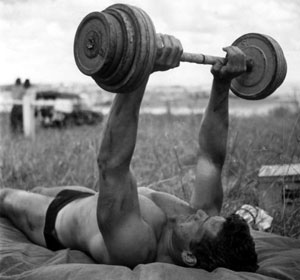