Bennard B. Perlman: Andy Warhol’s first educational experience beyond the confines of his home or school came when he was enrolled in Joseph C. Fitzpatrick’s Saturday morning art class at the Carnegie Institute while he was in the fourth grade. (BP149) 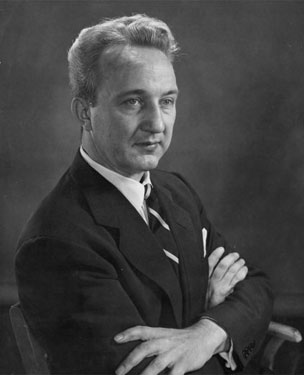 Joseph C. Fitzpatrick: I distinctly remember how individual and unique his [Warhol's] style was… From the very start, he was quite original. (FG28)

Bennard B. Perlman: The sessions were free, with two students participating from each school in Allegheny County upon the recommendation of their art teacher. Andy would attend these classes for four years.

Fitzpatrick was a legend to thousands of Pittsburgh children. Beginning before ten o’clock each Saturday morning, scores of youngsters would arrive by streetcar, auto, and chauffeur-driven limousine, and make their way into Carnegie Institute’s elegant Music Hall. There Fitzpatrick would greet them and prepare to weave his magic over as many as 300 students at a time. (BP149)

Fred Lawrence Guiles (Warhol biographer): It was while he was at Holmes School that he [Warhol] was chosen for free attendance at a Saturday school session in drawing set up in the music hall of the Carnegie Museum. It was called the Tam O’Shanter series (after the beret that artists sometimes wore), and only the most gifted youngsters from the fifth through tenth grade were eligible. The series produced, besides Andy Warhol, the painters Philip Pearlstein and Harry Schwalb, industrial designer Irene Pasinski and sculptor Henry Bursztynomwicz. (FG27)

Don Henderson (Fitzpatrick’s student): Each and every Saturday morning, this gentle giant of a man would strut out to the stage of Carnegie Music Hall and with a great sweeping gesture, he would bellow ‘RRRed… Orange, Yellow, Green, Blue, Purple, Brown and Black!’ Hundreds of bright young faces would light up with anticipation. Before we entered the hall, we had been given pencils, paper and crayons to record our lesson. Each paper had to include a color chart, a perspective chart and a description of what we observed from life the past week. On the back would be our drawing for the week.

For most of us, Mr. Fitzpatrick was the first real artist we had ever met. He was a tall man with white hair. His very presence demanded respect. It was like you were in the presence of royalty, Irish Royalty. He was always impeccably dressed and to say he was eccentric would be an understatement. He would step up to his easel at center stage and in a few strokes of thick black chalk, he would have a work of art…  ‘Look to see to remember to Enjoy!’ his favourite saying was always in the back of our minds.’ (DH)

Joseph C. Fitzpatrick:  Andy was a very good student. He was extremely talented and could do very realistic work, and he could do it with a decorative quality that was very becoming.

From the class every week I had what they called an honor roll, and the people who were on the honour roll [stood] at easels on the stage and would make a large drawing of the smaller one they had done. Then they would walk to the microphone, announce themselves… and explain their drawings… Andy was up on the stage in the honour roll many times. (BP149)

Paul Warhola: I used to take Andy to a lot of movies and some of the theatres locally, and we used to sit around the kitchen table and naturally I enjoyed sort of drawing and sketching. Later on, after we got Andy back to school, he showed a lot of talent and showed it at a very early age. We got him into a special programme at the Carnegie Museum in Pittsburgh, where they held art classes. Every Saturday the most talented youngsters would go there and they introduced them to art. We used to take Andy up there, and Mr. Fitzpatrick, who taught the classes, was very satisfied with him. Andy enjoyed it. At school he was only just keeping up, he definitely didn't like sports and thought they were a waste of time. most of the time he was drawing and painting. Later I bought him a camera - it was the new hand-held type. Back then they mostly sold Kodak box cameras. They also used to sell negatives of movie stars with photographic paper and used to put the paper in a little holder, put the negative on top, put it in the sun and you'd get a picture. Andy wasn't satisfied because he wanted to do it all on his own - developing and printing - and so we had a darkroom down there. He carried on with photography when he was already in elementary school [Holmes School] and than at Schenley High School. Carnegie Technical University was just about half a mile from home so he was able to commute back and forth. (RU60)

Nick Kish (Warhol’s childhood friend): The type of art we had at Holmes School was more in the form of science art. We had art in science, drawing leaves and a caterpillar with crayons. We tried to get it as close as possible to the real colours… The teacher always had something in mind that she wanted you to do. The drawings were either made from a picture or from the real thing, because we had in our science class everything, from baby alligators and baby lizards to aquariums. (BP148)

Bennard B. Perlman: Nick Kish, who lived in the same block as the Warholas and attended elementary and high school with Andy… became Andy’s best friend. They shared similar interests and backgrounds; Kish’s parents came from a village in Hungary just sixty miles from where Andy’s mother and father were before they immigrated to America… The boys would regularly visit each other’s homes to draw… (BP148)

Nick Kish: Andy and I were both outcasts, which is why we sort of got together. We didn’t loaf with the cliques on the corners. The fellas on either end of Dawson Street either played cards or shot craps. They were noisy and sometimes seemed to wait for the police car to roll around. They weren’t breaking the law, but we just felt that wasn’t the way we wanted to spend our time. (BP151)