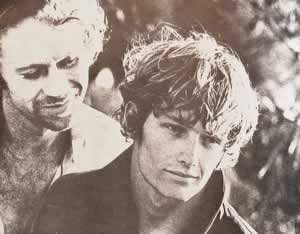 Louis Waldon died on December 6, 2013 in Los Angeles, after suffering a stroke. He appeared in Andy Warhol's Nude Restaurant, Lonesome Cowboys, San Diego Surf, Flesh and Blue Movie. In California he produced silkscreens which sample Warhol's imagery as shown below. His website is here.

In addition to the Warhol films, Waldon was also the subject of several films by Viva (and Cindy Sherman)'s ex-husband Michel Auder in the 1990s, including the 82 minute film Louis Waldon described as the following on Michel Auder's website:

"Auder made Waldon's acquaintance through Viva whom he had just met in Paris and would soon marry in Las Vegas. But not before recruiting the two underground superstars to be in his movie, Keeping Busy which is how Auder and Waldon became fast friends.

From the opening moments of Louis Waldon, it is clear the two friends have fallen out of touch with no indication when they last saw each other. After a quick survey of Waldon's small cluttered apartment, Waldon quickly recounts the humorous circumstances under which they met, revealing his disbelief (sustained over a period of twenty-five years) that Auder actually married Viva whom he (Waldon) knew to be somewhat nuts.

At one point, as an aid to memory, he plays a video tape of Warhol's Nude Restaurant and Tub Girls which features one of Viva's notorious selfabsorbed monologues. But despite Waldon's charms, which are brusque and many, it is a portrait in-full whose details are rather sad.

They feature a scene of substance abuse; passing mention of he and his son's estrangement; and a scene revealing how he supplements his meager actor's income by making beautiful knock-offs of Warhol silk-screen paintings. But the portrait is ultimately defined by warmth of character drawn from the embers of friendship." 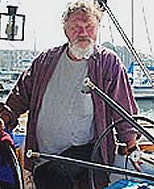 to DECEMBER 16, 1934: LOUIS WALDON IS BORN IN MODESTO, CALIFORNIA