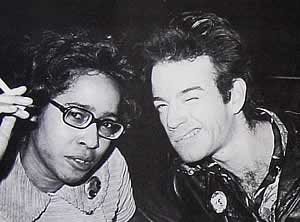 Dorothy Dean - sometimes referred to as "the black Dorothy Parker" because of her acerbic wit - was the door person at Max's Kansas City in addition to appearing in a number of Warhol films in 1965 including Restaurant, Afternoon, Space, Camp and My Hustler. She was born on December 22, 1932 in White Plains, New York to Reverend Elmer Wendell Dean (a native of Statesville, North Carolina) and his wife who remains a mystery - she is not named in Dorothy's obituary or any articles about her. Dorothy had one sister, Carol, and both went to high school in White Plains, New York. Dorothy continued on to Radcliffe where she earned a bachelor's degree with honours in philosophy. According to an obituary in Daily Camera magazine where Dorothy worked just prior to her death, she studied art history at the University of Amsterdam on a Fulbright Scholarship and received a master's degree in fine art from Radcliffe/Harvard University in 1958. While living in Cambridge she hung around with a clique of gay men, often at the Club Casblanca on Brattle Street.

Her closest friend from her Cambridge days was Arthur [Lehman] Loeb. (Loeb was also one of the people in the Chelsea Girls who Brigid Berlin rang after treating herself and Ingrid Superstar to some shots of "speed.") Loeb founded the Madison Avenue Bookshop in 1973 in Manhattan. As a member of the Loeb-Rhodes family he and his siblings inherited an estate of about $200 million after the death of their parents, John Langeloth Loeb, Sr. and Frances Lehman Loeb. Dorothy had met Loeb while an undergraduate at Radcliffe and was a regular visitor to his bookshop. At one point he had, apparently, asked her to marry him. In 1956 Dean became pregnant and had the child put up for adoption. Although it is not known who the father was, Loeb reportedly helped her with expenses at the time.

"Dorothy later told me, she had become pregnant by a wealthy student there [at Harvard]. The boy, fearful of the consequences os his blue-blooded parents learning that he had impregnated a girl - and an African-American at that! - washed his hands entirely of the matter. Dorothy, even then possessing a fair share of temerity, proceeded to blow the whistle on the cad to his fraternity brothers. Forthwith they in an act of honor, broke into the boy's dorm room, stole a small Matisse from his wall, gave it to Dorothy, who sold it for enough to pay for an abortion - and then some. In 1956 Dorothy became pregnant once again; this time, though, she went full term before giving the child up for adoption. Some people believed the father was a Dutch student she met while on a Fulbright; others thought him a certain M.I.T. professor."

Ehrenstein also recalls that Dorothy told him she had had an affair with Kris Kristofferson, possibly during the time that she studied at the University of Amsterdam.

"One of many tales... [was] related to me by Dorothy herself shortly after I met her. In her usual nasal drawl, which bore a remarkable resemblance to Mae West if she had gone to Radcliffe... Dorothy asked me, 'Have you ever heard of this person Kris Kristofferson?... Dorothy then went on to tell me about a brief and intense relationship (were there any other kind for Dorothy?) with the entertainer that had taken place in Italy fifteen years earlier. She was on a Fulbright and Kristofferson was (hard to believe) a Rhodes scholar... When it came to pass that Kristofferson resurfaced in this entirely unrecognizable form of movie star-country singer, Dorothy sprang into action. She sent him a letter excoriating him for all the cultural criminalism he was wreaking... She never received a reply."

In 1963 she moved to New York, getting a job as a fact checker at The New Yorker magazine. One of her colleagues at the magazine later recalled "She had an I.Q. that went off the charts but no particular ambition. She was lazy. And she didn't observe the decorum of the place. Dorothy had a don't-tread-on-me personality that wouldn't allow for the magazine's more difficult, self-conscious writers."

Art writer Calvin Tomkins, a staff writer during the time that Dorothy worked at The New Yorker, recalled his own experiences with her at the magazine:

"I was working on a story about Robert Rauschenberg, and she was my checker. I handed the piece in, and she came to my office and said, 'Is this guy on the level? This guy's a fraud, not an artist. You've been taken in.' And so on. And of course, checkers never ventured an opinion about a piece. Never. That was part of the hierarchy of the magazine then. So off Dorothy goes to 'check' Rauschenberg and prove me wrong. And she come back entranced. Bob used to collect people, and he collected Dorothy. She became part of his entourage. For a while."

After leaving The New Yorker she worked at various other magazines including Vogue, Show and Essence. She said she was fired from Essence after suggesting that they put Andy Warhol in blackface on the cover of the magazine. After that she lived off of freelance copy editing and proofreading jobs and gifts of money from friends or her mother.

She gravitated to Warhol's Factory during the 60s and appeared in a number of films by him in 1965, including Restaurant, Afternoon (which also included Arthur Loeb in the cast), Space, Camp and My Hustler. She also appears in Warhol's book, A: A Novel, as the character Dodo Mae Doom. According to Hilton Als in The New Yorker, it was Dean who gave Andy Warhol the nickname of Drella - a combination of Dracula and Cinderella.

"The mother of All Fag-Hags, she felt the term had an ugly ring to it, and much preferred 'Fruit Fly'... It was almost inevitable that Dorothy would become part of Andy Warhol's Factory circle... but that scene had pretty much disappeared by the time my boyfriend David and I met her in the Seventies... Complex to a fault, Dorothy was the sweetest, brightest, and most frightening woman I have ever known. I met her in 1970 while working at a bookstore owned by her friend Arthur, the inspiration for the Dudley Moore movie of the same name (or so it has always seemed to me)... I was on the staff when the place opened, and although Dorothy wasn't an employee, she was so omnipresent a fixture that she seemed like staff. My boyfriend was dazzled when he found out she hung out at the place.

... Dorothy wore horn-rimmed coke bottle lens glasses, usually dressed in a simple, tasteful shirt dress; and was, without question, New York's most incurable diseuse. Nearly every time I was with Dorothy, she happened to be drinking; she would invariably ask me the same question: 'Did I ever tell you about the time I once danced the 'Tennessee Waltz' in Tennessee with Tennessee Williams?' (Which was true.) She claimed it was one of her proudest accomplishments in life. I don't think she was joking."

While living in New York, Dorothy started her own newsletter, the All-Lavender Cinema Courier, probably in late 1975/early 1976. Ehrenstein recalls, "we began receiving copies of it shortly after moving to California, starting in July 1976 with issue number 3. Knowing Dorothy there may not have even been a 1 or 2, or else these might have been issued sometime during the sixties." The 'newsletter' featured Dorothy's ruminations on the state of cinema in the U.S.

In 1976 Dean fell in love with Norman Fisher, who sold cocaine to art-world luminaries such as Sam Wagstaff and Robert Mapplethorpe, then Wagstaff's boyfriend. She mentions Fisher in a letter she sent jointly to the Frick collection curator Edgar Munhall and art consultant John Abbott:

"Just to keep you up to date on the ROMANCE of my wan life. On Monday evening, 7 June last... I actually had, at his suggestion, a real life honest-to-god "date" with the Forbidden Fruit. We went to a little opera at Alice Tully Hall (during the performance I actually got to hold the FF's hand - it was indescribably thrilling... Unfortunately, the evening fell apart later when we returned to the Forbidden Fruitstand [and]... a whole swarm of that riffraff and trash with which Norman... is wont to associate invaded the fairy aerie... Anyway, privacy and intimacy dissipated, and I left in tears."

In 1979 she was evicted from the small apartment she had lived in from 1963 on Morton Street. Raymond Sokolov recalls that "she was convinced she was going crazy" after her eviction.

"When Dorothy was thrown out of Morton Street, she was convinced she was going crazy. I took her to St. Vincent's so she could get treatment, dry out. She hated the doctor - he wore an earring in one ear. After he'd examined her, he said that Dorothy must be delusional: 'She keeps saying she went to Radcliffe.'"

The same year (1979) she applied to Harvard Law School although never enrolled. She moved to Colorado in 1980, writing to her friend John Abbott, "Did I tell you about the local phenomenon, The Liquor Mart? This place occupies a sweep of approx. 18 city blocks - liquor, liquor, liquor everywhere.... Oh, joy."

In Colorado she supported herself by initially working in a bookstore, then as a free-lance copy editor and for two and a half years as a proofreader at the Daily Camera magazine. Eventually she also joined Alcoholics Anonymous and allegedly a bible study group.

She died on February 13, 1987 at the Hospice of St. John in Lakewood Colorado of cancer. A memorial service was held for her at St. John's Episcopal Church in Boulder on February 22, 1987 - the same day that Andy Warhol died.

"Dorothy Dean started working the door at one point. She started as sort of an assistant when I was working the door upstairs. She went to Radcliffe. I met her in Boston. There were a bunch of people that came to New York from Harvard at the same time that Dorothy did...

Dorothy was very slight with harlequin glasses, and her purse was half the size she was. She had worked for several magazines, but she drank too much and was incredibly bitchy. Her obsession was with gay men. She had this one man who she was completely in love with. She used to call him the Sugar Plum Fairy. Lou Reed refers to him in his song, Take a Walk on the Wild Side. She was often found in leather bars in the West Village in pursuit of the Sugar Plum Fairy. That was her love, and then Lou Reed became the focus of her life.

Mickey didn't like black guys at the bar hitting on white women. He wanted to get rid of these two guys, so he sent Dorothy Dean to do the job. After agitating with them for a while, she told them to leave, that they were 86ed - 'First of all, my name's not yo. Secondly, I'm not your sister, and thirdly black is not beautiful, it is pathetic, get out.' And they left." (HR35)

Daily Camera obituary, February 15, 1987 (thanks to David Cotner of Hertz-Lion)