A special screening of more than 80 minutes of Andy Warhol's Screen Tests will be shown at the Whitney Museum in New York on Thursday, July 6, 2006 at 7:00 pm. and will include the rarely shown Screen Tests of Ed Hood, Penelope Palmer (Ivy Nicholson's daughter), Harry Smith and David Murray in addition to Ann Buchanan, Ivy Nicholson, Susan Sontag, Chuck Wein, Beverly Grant, Taylor Mead and others. The films will be introduced by the world's foremost authority on Warhol's films, Callie Angell, who will also remain after the screening for signings of her book, Andy Warhol Screen Tests: The Films of Andy Warhol Catalogue Raisonné, Volume One. Callie's book clears up a lot of the misinformation out there about Warhol and his films and is based on more than ten years of research.

THE "FATHER OF POP" 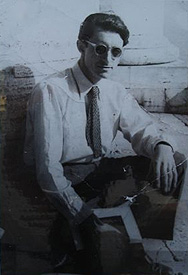 I have added to this site this month an interview with the son of John McHale. McHale was part of the Independent Group in the UK during the 1950s and one of the artists participating in the This is Tomorrow exhibition at the Whitechapel Gallery in London in 1956. Reyner Banham referred to McHale as the "father of pop" in the catalogue that accompanied an exhibition of McHale's works at the Albright Knox Art Gallery in Buffalo, New York in 1984.

The interview is here.

Ultra Violet is currently working on an opera based on her autobiography Famous for Fifteen Minutes: My Years with Andy Warhol. Ultra (aka Isabelle Collin Dufresne) commissioned John Stirling Walker to write the libretto and David Conte to compose the music. Although most of the score is yet to be written, Walker was quoted in the June issue of Art News as saying the the opera will be made up of eight scenes or "impressions" from Ultra's life. According to Conte, "We're groping our way toward finding the exact musical container that it's going to be held in." Presumably whatever musical container they do find as a result of their groping will contain scenes dealing with Ultra's friendship with Salvador Dali who she characterizes as "funnier than Mr. Bean" in the same issue of Art News.

"By now I am under Andy's spell. After all, I left France deliberately to break with family and tradition. I've had my turn with Graham, with Dali, with many others. Andy is up my alley... I am suddenly wild about Andy. In a low tungsten key, he is amusing, even thrilling. I must seduce him... We both step out onto the narrow metal platform of the fire escape. I grab Andy. He moans. His body is cool and it seems to become colder and colder by the instant. I say, 'Andy, let's make love.' I reach for him, but he wriggles out of my embrace. When I move closer and try to clasp him to me, he stiffens and resists. He moans loudly. A passerby lifts up his head and screams, seeing us suspended in the air, wrestling on the perforated metal platform... Back in the loft, we are both shaken by this non-seduction scene. I push my hair back into place. Andy's hair is in disarray. I don't mean to stare as he adjusts it, but I am unable to pull my eyes away when I see a snap, a metallic snap embedded in the front part of his skull. He snaps his hair into place." (pp. 14-15)

One of Andy Warhol's many wigs was recently sold for $10,800 at Christie's auction of entertainment memorabilia - considerably higher than its pre-auction estimate of $4,000 - $6,000. A pair of paint splattered shoes worn by Warhol went for $7,800 and a paint brush used by the artist earned $3,840. A trench coat owned by Warhol remained unsold.

At last - an officially sanctioned Warhol film on a commercial DVD. Hopefully, it's a harbinger of things to come. Warhol's 4.4 minute Screen Test, "Helmet," appears on the latest compilation of the Cinema 16 series which also includes early work by Todd Solondz, Gus Van Sant, George Lucas and D.A. Pennebaker.