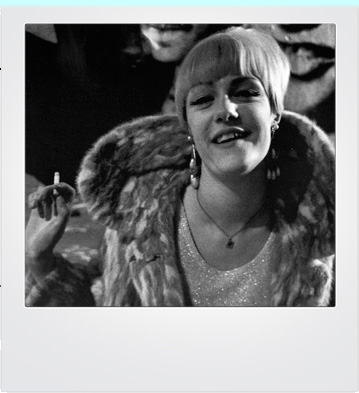 Ingrid Superstar (Detail from a photo by Stephen Shore)

In addition to her talents as a film comedienne, Ingrid Superstar also wrote short poems and prose pieces, which were occasionally published, and sometimes gave public readings from her Trip Book. Warhol thought 'her poems were good, really good, half poetry and half comedy.' In later years, Ingrid Von Scheven fell on hard times, struggling with a drug problem and eventually ending up in Kingston, New York, where she worked in sweater factory. She disappeared one day in December 1986, after leaving her apartment to buy cigarettes. although the Kingston police announced 'there's a clear possiblity of foul play and we are intensifying our investigation,' she was never found. She was forty-two years old at the time of her disappearance. (AD197)

An article about Ingrid's disapearance titled 'Ex-Warhol Protege Vanishes' (by Amy Pagnozzi) was published in the New York Post on 4 February 1987. After her daughter's disappearance, Ingrid's mother took out an advertisementin a newspaper with a message asking her to 'Come back so we can play 'Morning Dew' without feeling sad.' (FM427) Ingrid never returned.

Ingrid Superstar and Susan Pile in The Bob Dylan Story