The second production of Glamour, Glory and Gold, which featured Robert De Niro in the cast, took place in 1968 at the same venue as the previous production. According to Andy Dougan in Untouchable: Robert De Niro: Unauthorized (Virgin Books, 1997), this production "opened at Bastiano's Cellar Studio on 7 August 1968... De Niro found himself getting the first good notices - actually the first notices of any kind - of his career. 'The nicest acting,' wrote the Village Voice newspaper two weeks after the play opened, 'came from Jean Richards as a dumb, good-hearted, timid girl friend of Nola's, and, especially, from Robert De Niro in a variety of Nola's boy friends and leading men...'"

It was at one of the performances of the second run of the play that De Niro met Sally Kirkland. Kirkland was the daughter of the fashion director of Life magazine and was included in a version of Warhol's The Thirteen Most Beautiful Women. Callie Angell notes, "A certain amount of manipulation can be observed in one of the first reported screenings of The Thirteen Most Beautiful Women, which took place in January 1965 at the home of Life magazine fashion editor Sally Kirkland [Sr.]... In this 'Kirkland' version of The Thirteen Most Beautiful Women, the Screen Tests of fourteen different women were projected simultaneously on three walls; one of these women was Sally Kirkland's daughter, also named Sally..." (AD250) In De Niro: A Life (NY: Crown Archetype, 2014), author Shawn Levy gives more details of how Kirland met De Niro at Jackie's play. After a performance of the play Sally went backstage to congratulate De Niro and a "romance" developed.

...De Niro may have felt like an on looker in the political and cultural events of the 1960s, but he was willing to throw himself in with any number of avant-garde artists who were pursuing radical new directions in film and theater.

One of the them was Ron Link, a celebrated off-Broadway director who was preparing a revival of a campy show he'd had a minor hit with the previous year: Glamour, Glory and Gold: The Life and Legend of Nola Noon, Goddess and Star. The play was a pastiche of the life of a tragic actress of old Hollywood (Jean Harlow's name was often mentioned in reviews), cobbled together as a series of sketches and blackouts rather than as sustained drama. The makeshift structure of the script may have been the result of its having been the work of a first-time playwright, a twenty-year-old drag queen named Jackie Curtis who was a rising star in the firmament of Andy Warhol's Factory scene. The original production in the fall of 1967 became a cult smash on the strength of the casting of Curtis and another of Warhol's superstars, the famed drag queen Candy Darling, in support of Melba La Rose Jr. - an actual woman - who tackled the lead...

The Playwrites [sic] Workshop Club, which had produced the first version of the show, would do the show again, at the tiny Bastiano's Cellar Studio Theater on Waverly Place where it had played before. This time, Link would go with a less gender-bending cast, with the actress Paula Shaw in the lead role and, as in the original, a small cast of male actors playing multiple roles. De Niro certainly didn't run with a Warholian crowd, but he heard about the play and auditioned, trying to sweeten his chances of being hired by offering to have the posters and programs for the show printed for free by his mom.

He got the part, or rather the parts, ten in all: Duke, Lefty, Vinny, Peter Billings, Leading Man, Irvin, Harold Minsky, G.I. Joe, Baby Leroy, and Grady Eagles, per his resume... The play opened in August, providing De Nniro with the first reviews of his fledgling career. They were very, very, positive: "Robert DeNiro [sic] appears in no less than ten cameo characterizations and is a standout comic actor, " said Show Business. "He's a master of the art of underplaying." The Village Voice concurred: "De Niro made clean, distinct character statements in a series of parts which many actors would have fused into a general mush. De Niro is new on the scene and deserves to be welcomed."

The run of the play was brief, but it was crucial in a number of ways. With it, De Niro had gotten his foot well inside the the door of experimental theater in new York, he had acquired his first significant postitive press, and he had grabbed the attention of a young woman who would become a booster of his work and his career as well as briefly a romantic partner.

Sally Kirkland was a big-eyed, statuesque twenty year old blonde from Pennsylvania who had been born to a life completely different from De Niro's. Named after her mother, also Sally Kirkland, a Vassar grad who had been in influential fashion editor for Vogue and held the same position at Life for decades, the younger Sally had been raised on Philadelphia's Main line and the Upper East Side of Manhattan as a debutante and society girl... But she had chucked it all for an acting career and an offstage role as a scene-sweller in the Manhattan of the 1960s... Along with her roommate, another aspiring actress named Susan Tyrell, she took in De Niro's performance in Glamour, Glory and Gold, and, like the critics, was deeply impressed. "He was electrifying," she remembered, "totally different in each part. I went backstage and told him, "You are the greatest actor since Brando, and you are going to be a huge star." And after, Bobby would phone me and ask over and over again, "Do you really think I'm any good? Do you really think I'm any good?"

There was a romance between them, but there was also an acting partnership.

De Niro did not participate in the third production of Glamour, Glory and Gold which took place at a venue at 62 East 4th Street in 1974. (By that time, De Niro had already made a number of films including Hi Mom! (directed by Carrie director, Brian De Palma), The Gang That Couldn't Shoot Straight and Mean Streets (directed by Martin Scorsese who would later direct him in Taxi Driver.) 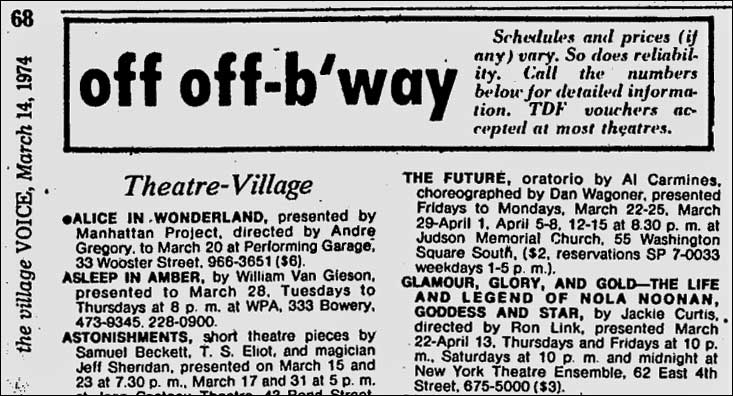 The ads in the Voice also named the venue as the "New York Theatre Ensemble." 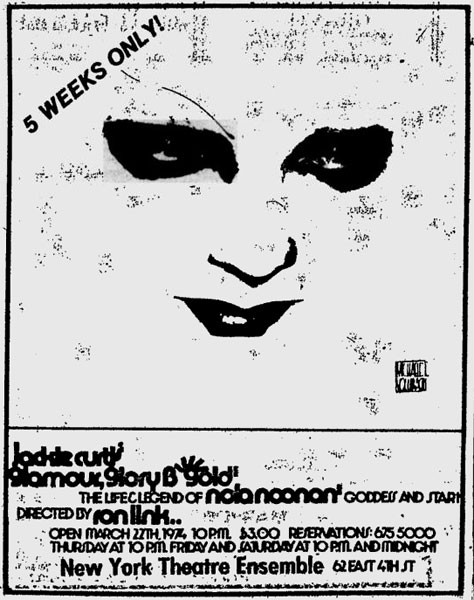 The ad in Interview magazine, however, indicated that the venue was the Fortune Theater. 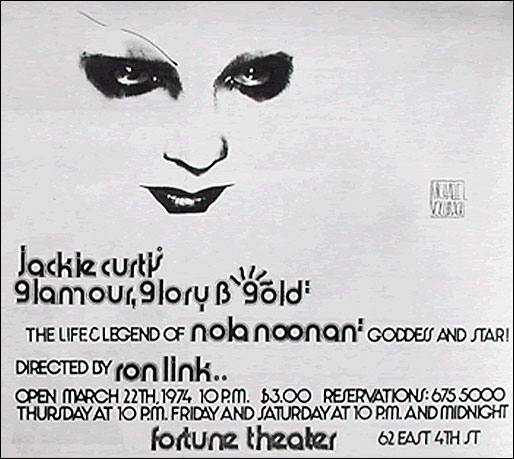 The address in the ads was the same, the venue was the same but for reasons unknown the Fortune Theater was advertised in the Voice as the "New York Theatre Ensemble."

"Fortune Theater" was also used in the review of the production in the Voice: 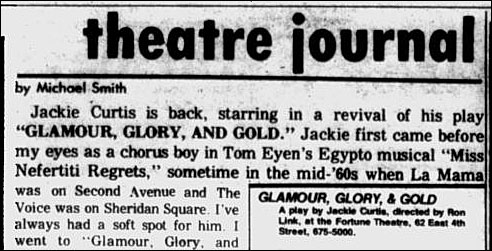 Jackie Curtis is back, starring in a revival of "GLAMOUR, GLORY, AND GOLD." Jackie first came before my eyes as a chorus boy in Tom Eyen's Egypto musical "Miss Nefertiti Regrets," sometime in the mid-'60s when La Mama was on Second Avenue and The Voice was on Sheridan Square. I went to "Glamour, Glory and Gold" with some trepidation, having found it grating in its first production some years back at Bastiano's Cellar on Waverly Place. The late Candy Darling was in it then. Now Jackie plays the lead role himself, and he comes through with a performance that demonstrates his specialness again. His talent is ineffable and contradictory - he is somehow truthful and touching even when the material is trashy and patently false; he is graceful in his clumsiness, beautiful in his plainness, in control of his knockabout freedom; he plays a woman without pretending to be a woman. The play too is built on contradictions. Its story of Nola Noonan, hash slinger to stripper to star to pitiful has-been, is a time-worn cliche out front, as well as a projection of the very fantasies Jackie, Candy, and other sex-switching pop show people have made their lives on for the past few years; but it is a second-hand rose of a fantasy in the first place, half mockingly contrived from careers that were themselves contrived by the star system and the economics of sexual frustration. So the play is half mocking about itself even while it is itself, while the publicity for it says Jackie Curtis is Nola Noonan. You don't know how to take him, her, or it. It is these ambiguities, and his spirit, that give the work its character and interest.

The play sometimes gets strident, relying too steadily on the comedy of insult, but more often it is charming, whimsical, knowing and hard-boiledly tender. Ron Link's production is snappy and energetic, playing into the fond Hollywood routines with style and relish but not getting lost in them, nicely underlining the surreal, expressionist imagery that is Curtis's special language as a dramatist, and manoeuvering the small, skill cast through the Eyenesque collage of a narrative with swift assurance. Andrew Amic Angelo is remarkable - as a whip-wielding movie director, and has an amazing tirade of denunciation after Nola fails in her comeback. Estelle R. Dallas is flawless as Nola's tough, loyal girlfriend. Jeremy Abbott, Madeleine Le Rous, and Paul Vanase, who complete the cast, are all good.

And then, on the right-hand side of the review, was the following announcement:

One night during the run of the play, Jackie and Douglas Fisher (Toulouse de la Beaupres) made the mistake of leaving the theater in full drag. Barhopping on their way home through a not-very-nice part of the East Village, they were followed and harassed by some street punks, one of who held a knife at Jackie's back. Jackie suffered what was thought to be a minor stab wound in the back under one shoulder blade. Rather than go to the hospital, Jackie self-medicated for the pain with a combination of speed, alcohol, and marijuana.

Several days passed, and Jackie called me and told me there was bright red blood in his urine. I implored Curtis to go right to the emergency room, but there was only an hour or two before a sold out performance, and "the show must go on." Jackie went on stage with a high fever and collapsed during the curtain call. Some members of the audience thought it was just a Curtis drama queen stunt, but an ambulance was called and Jackie wound up in emergency surgery. His right kidney had failed due to infection and it was removed. (JCP235-6)

The fourth production of Glamour, Glory and Gold ran at the Fortune Theater from May 2 to 12, 1974, after Jackie recovered from having his kidney removed.

Although the ad in Interview magazine advertised "additional performances" in New Haven and Amsterdam, they never took place: 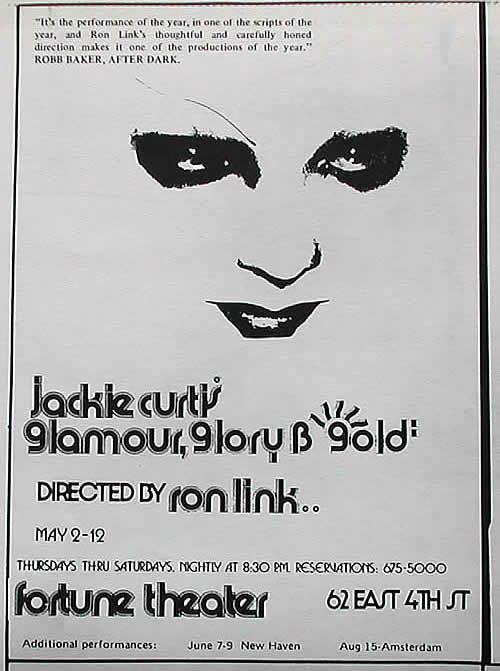 Jackie died on in on May 15, 1985 of a heroin overdose. There was a revival performance of Glamour, Glory and Gold, directed by Jackie's cousin, Joey Preston, at La MaMa from December 4 - 7, & 11 - 14, 2003. The cast featured D'Arcy Drollinger as Nola Noonan, Clayton Dean Smith as Toulouse, Janine Kyanko as Mazie and the Speech Teacher, John Patrick Kelly as Duke, Peter, LaMonte and Harvey, Laverne Cox as Mrs. Gerald Freeman, Bryan Safi as Johnny Apollo, Fritz, Harold and Gerarld Freedman, Boris Kievsky as Amy, and Christopher Ross as Frou Frou, Lefty, Irwin and Vinny. (Cast member Laverne Cox would later go on to appear as Sophia Burset on the Netflix television series Orange is the New Black for which she was nominated for an Emmy.)