A new art gallery in Madrid, ArtePaso ShowRoom, has opened with an exhibition of work by Andy Warhol and Pietro Psaier - "The Factory, Andy Warhol & Pietro Psaier.” Claims made about Pietro Psaier over the past few years include that he and Warhol produced "joint works" and that they had a "bisexual relationship" during the 60s.
(Press release here.)

If the "joint works" claimed to be by Psaier and Warhol are authentic, the ramifications for the Warhol market (and therefore, the art market, given the "blue-chip" status of Warhol's work) would be immense. The claims made about Psaier, however, were largely dismissed when Wikipedia removed Psaier's biography from their site because there was no hard evidence that Psaier ever existed, let alone worked with Warhol.

This hasn't prevented the Madrid gallery from exhibiting Psaier's work alongside that of Warhol in its inaugural exhibition which appears to be similar to a traveling show in 2003 - 2007 (see here) which included a real electric chair supposedly owned by Psaier and claimed to have been used by Warhol for his Electric Chair paintings. (The exhibition's electric chair does not resemble the electric chair in Warhol's paintings and, in any case, Warhol worked from a photograph of an electric chair rather than the real thing.)

Details of the exhibition in Madrid here. 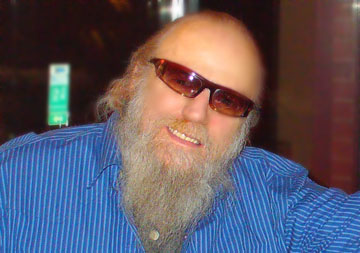 Billy Name
(Detail from a photograph by David Shankbone)

Photographer/artist Billy Name - the designer and de facto foreman of Andy Warhol's silver Factory - will be speaking at the Center for the Arts and Humanities at Nassau Community College on Thursday May 6, 2010 from 4:00-5:15 pm (Room GC-65 (basement of the G-Building). The lecture is open to the public. The Nassau Community College is located at 361 Rice Circle, Garden City, NY, telephone: 516-572-8002. Billy previously lectured at the New Paltz State University of New York on Thursday April 29th in conjunction with their "Andy Warhol: Public and Private" exhibition.

Details of Billy's upcoming talk can be found here.

Team Warhol asks: "What are you afraid of?"

The students of the University of Maryland's "Philosophy 3245" class (aka "Team Warhol") have posted a film to YouTube asking "What are you afraid of?" Click on the above image.

Scottish antiques dealer offers a painting by "Pietro Psaier" with a "Certificate of Authenticity" by "Factory Additions Inc." claimed to have been owned by Hugh Hefner 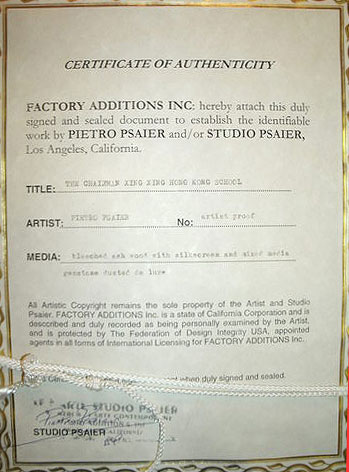 A Scottish art dealer, Kingdom Antiques, based in Fife, is offering a painting by "Pietro Psaier" accompanied by a "Certificate of Authenticity" from "Factory Additions Inc." for $2856.80. According to their website, the painting "depicts Chairman Mao" and was previously "in Hugh Hefner's collection." See here)

Factory Additions was the name of a company that Andy Warhol started in New York to produce his prints. It operated from 1966 to 1974. Last year the Sunday Times (London) reported that "in March 2001 John Fairchild started a company called Factory Additions, which appears to have authenticated many of Psaier’s works. Peter Psaier was a registered agent and [John Fairchild's daughter] Nadia Fairchild was the secretary." (Richard Brooks and Georgia Warren, "Andy Warhol acolyte may be artistic illusion," Sunday Times, 30 August 2009)

John Fairchild was convicted of art forgery in the U.K. in 1992 and was sentenced to a year in jail. In the past he has lived in the U.K., the U.S. and Spain. (See here)

Despite the fact that no birth certificate has ever been produced for "Pietro Psaier" and no city of birth has been named for the artist, a London auctioneer, John Nicholson, claimed in a press release that "Pietro Psaier" and Warhol produced "joint works." (Press Release 4982 here.)

From a John Nicholson press release issued in 2008:

"The auction prices for Psaier's work have increased drastically over the last two years... The chalk drawing of Marilyn Monroe in red, a joint work between Pietro Psaier and Andy Warhol, was produced in 1979 as an initial sketch for a larger oil painting, it eventually sold for £14,000 and similar work in blue sold for £13,000. Another Psaier and Warhol joint work chalk drawing of Che Guevara sold for £7,000..." (Press Release 76180)

In August 2008, prior to a major auction of work by "Psaier" at his auction house, John Nicholson promised (along with researcher Jacqueline Chapman) to "publish the catalogue raisonné" of Psaier's work. It is now more than a year later and still no catalogue raisonné is forthcoming. See Antiques Trade Gazette here.

Although Jacqueline Chapman claims to have a death certificate for the artist she has so far failed to produce one. Nor has anyone explained why the paintings are being sold in the U.K. and Spain rather than the U.S. and why they were not sold before Warhol's death.

The biography of "Pietro Psaier" was removed from Wikipedia after a week of debate in which nobody was able to come up with any hard evidence that the artist actually existed, let alone collaborated with Warhol. (Wiki articles for deletion here.

Other claims made about "Pietro Psaier" include that he worked with Jean-Michel Basquiat and was commissioned by Our Lady of Malibu Church to do a series of sixteen acrylics on canvas which were sold by John Nicholson in December 2006. (See Press Release 4982)

Despite the doubts about Psaier his works continue to be sold by auction houses in the U.K. A collector has left a comment on the Psaier page of the about.com website indicating that works alleged to be by Psaier were sold at both Southgate and Criterion Auctions in addition to Nicholsons. The Coloured Rain Gallery in Northern Ireland has also sold quite a number of "Psaiers." Chiswick Auctions have sold his works in the past and currently have a Psaier painting titled "Cocaine" in their catalogue. Keys Auctions in Norfolk are offering two works attributed to "after Pietro Psaier" in their 7 May 2010 prints sale. Strangely, even though they are attributed as "after Pietro Psaier" the description mentions that they bear a signature. (See Invaluable catalog here.

Whytes Auctions have also sold Psaiers in the past and have a Psaier listed in the online catalogue for the 23 April 2010 sale which includes a "certificate of authenticity." On their website Whytes describes Psaier as "reputed to have collaborated with such influential artists as Andy Warhol, during the Factory years, and Francis Bacon in the early 1990's." (See Whytes catalogue here)

Other Psaiers being sold in future auctions include two attributed to "Studio Psaier" by Lots Road Auctions in Chelsea scheduled for their 9 May 2010 auction. Lots Road has sold Psaiers in the past. They list one sold for £600 in a previous sale on 25 April 2010.
(See here.)

This is in addition to the hundreds of works offered for sale by John Nicholson in several high profile auctions of Psaier's work - despite the fact that "The First and Last Show" of Psaier's work was announced as early as winter 2007 by Art in London magazine. 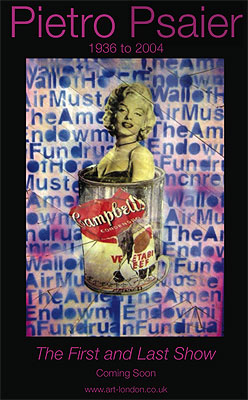 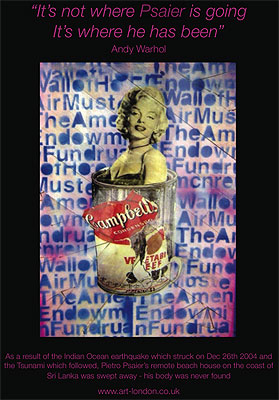 "The First and Last Show" of Psaier's work took place at the 5 Blenheim Crescent Gallery in London in March 2008 and was presented by John Nicholson and Peter Barham. Barham would later purchase a Marilyn Monroe painting by Psaier for the "top price of £10,000" at Nicholson's September 2008 auction even though he had just put on the "First and Last" Psaier show with Nicholson about six months earlier. (See Daily Mail article here.)

Mary Woronov - who starred in numerous Warhol films (including The Chelsea Girls and Hedy) as well as performing with the Velvet Underground as part of the Exploding Plastic Inevitable - will be participating in the "Tribute to Roger and Julie Corman" taking place this weekend, April 23 - 25, 2010, at the University of Southern California (USC) in Los Angeles. Mary will be introducing a screening of Rock n' Roll High School on Saturday, April 24, 2010 at 2:00 pm and she'll also be one of the panelists at "The Legacy of Roger & Julie Corman" event beginning at 6:00 pm on Sunday, April 25th.

and Death Race 2000, are being released in Blu-ray in May and June. A documentary on Mary is currently in production and is due to be released in 2011. Her latest film, The House of the Devil, has also beeen released on both Blu-ray

For decades now, art writers have been using the incorrect starting date for the exhibition "Andy Warhol: Das zeichnerische Werk" - a major show organized by Rainer Crone which traveled to Dusseldorf, Bremen, Munich, Berlin, Vienna and Lucerne. Although most (if not all) exhibition lists and chronologies indicate a starting date of February 12, 1976 the exhibition actually opened a week later - on February 19, 1976, as per the announcement for the show (above) as brought to my attention by a site-user. Presumably one author listed it incorrectly and the wrong date was picked up by later publications - another case of "Chinese whispers" in the art world (similar to the often repeated but incorrect attribution of the term "pop art" to Lawrence Alloway - see "Danto also makes a critical error.. here."). The site-user who brought it to my attention has had the correct date (February 19) confirmed by the museum.

Twisted Pair: Marcel Duchamp / Andy Warhol Opens at The Warhol on May 23, 2010

"Twisted Pair: Marcel Duchamp/Andy Warhol," an exhibition exploring the artistic links between Andy Warhol and Marcel Duchamp opens at The Warhol museum on May 23, 2010. Warhol made several short films of Duchamp and at one point planned on filming him over a 24 hour period. Warhol's sculpture The Large Kiss was most likely a reference to Duchamp's Large Glass and his Most Wanted Men series a reference to Duchamp's Wanted: $2,000. Just as Duchamp "retired" from painting in the 1920s, Warhol announced his retirement from painting during a trip to Paris in 1965 - although neither actually stopped producing work.

Both Duchamp and Warhol experimented with female alter egos. Christopher Makos' photographs of Warhol in drag are comparable to Duchamp's representation of himself as "Rrose Selavy." Just as Duchamp produced works in the name of Rrose Selavy, Warhol proclaimed in 1969 that Brigid Polk (aka Brigid Berlin) did his work - although he later retracted the statement after, according to POPism, collectors "were panicking that they might have Polks instead of Warhols..." (POP248)

"Warhol did in fact make four three-minute rolls of Marcel Duchamp: a short 'newsreel' of the opening of Duchamp's retrospective at the Pasadena Art Museum on October 7, 1963... and three other posed portraits shot on February 7, 1966, at the opening of 'Hommage à Caissa,' an exhibition at the Cordier and Ekstrom Gallery in New York to benefit the Marcel Duchamp fund of the American Chess Foundation. Aside from these publicly filmed events, no evidence of the larger Duchamp film has been found in the film collection, although a March 9, 1970, letter to Warhol from Ken Tyler of Gemini G.E.L., the design firm specializing in artists' multiples, makes cryptic mention of a prototype for a 'Duchamp super 8 movie box.' (AD66)

On May 18th Callie Angell, Adjunct Curator of the Andy Warhol Film Project at the Whitney Museum of American Art (and author of Andy Warhol Screen Tests: The Films of Andy Warhol Catalogue Raisonné, Vol. One) will be giving an illustrated talk on Warhol's unfinished and unreleased film Batman Dracula at the Light Industry at 177 Livingston Street, Brooklyn. Tickets available at the door for $7/Starts at 7:30 pm.

Robert Patrick's illustrated lecture on the Caffe Cino is now available on DVD and can be ordered at: here.

Robert was one of of the playwrights at the Cino and maintains an online archive of photos and materials relating to the venue here. In addition to his work on the Cino, he is currently working on "Nameless Neighbors" - a collection of haunting photographs of the forgotten homeless people of Hollywood where he currently lives.

Robert can also be seen in the documentary on Quentin Crisp, Resident Alien. A YouTube clip from the film (which also includes footage of Holly Woodlawn) can be seen here.