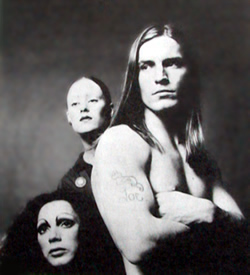 In addition to Holly Woodlawn, the cast of Trash also included Joe Dallesandro, Jane Forth, Geri Miller, Michael Sklar, Andrea Feldman and Holly's real-life boyfriend, Johnny. Johnny played the part of the student on his way to the Fillmore who Holly shoots up ("trust me").

Although Holly had visited the Factory with Jackie Curtis prior to being cast in Trash, Paul Morrissey first noticed her in an underground newspaper. In September 1969 she was appearing in Jackie Curtis's play, Heaven Grand in Amber Orbit, and she gave an interview where she purported to be a Warhol superstar. When Paul Morrissey saw the interview, he was intrigued.

"When I cast Holly in the film Trash, I had never met him. Someone had brought to my attention an article in some throwaway underground newspaper that discussed in great detail Holly's success as a major star of Andy Warhol productions. Since Holly had never been in any of the films and I had never even met him, this brazen lie must have appealed to my comic sense. I simply had a hunch that here was some kind of "character" or personality. Although Andy pointed out that Holly was someone who had tried to rob him by charging an expensive camera to his account, the combination of lying and larceny only increased my curiosity. When I asked Holly on the phone to show up at the location of the film I was starting that weekend, I puposely decided to forego any meeting or interview beforehand, something unusual even for me." (HWIX)

The "expensive camera" incident that Paul refers to took place earlier in the year. Holly had met somebody named Jeff who had worked at the Factory as a "go-fer" but had been fired. He ran into Holly on the street and asked if she would go with him to pick up a camera.

"We entered a camera shop and the next thing I know, he's charging a two-thousand-dollar camera to Warhol and telling the clerks that I'm Viva! I looked at him and I said, 'What are you doing?' And he said, 'Don't worry. I do this all the time.' Yeah, right. He was so nervous he was quivering! The store clerk looked at us and said that he would have to verify the charge to Andy's account. There I was, not knowing what to do, thinking, 'Oh my God. What have I gotten myself into now?' when Jeff bolted out of the store and fled. Well, I ran out of the store as fast as I could... I felt used and betrayed. I couldn't believe this little punk made me his moll, and then ran out on me when the heat was on. The nerve!" (HW130)

Although Warhol was apprehensive about Paul casting Holly because of the camera incident, Paul followed his "hunch" and hired Holly. He wasn't disappointed. When the film opened the following year, the audience loved Holly's performance. George Cukor started a campaign in Hollywood to get her nominated for an Academy Award.

During the winter of 1970, I got a telegram at Max's from the Academy of Motion Picture Arts and Sciences... George Cukor, smitten with my performance and touched by my persona, had launched a campaign to prompt the Academy of Motion Picture Arts and Sciences to nominate me for an Academy Award. Soon orange buttons regarding HOLLY WOODLAWN FOR BEST SUPPORTING ACTRESS were being distributed all over the place and a petition supporting the nomination was also circulating, boasting the signatures of such luminaries as Ben Gazarra, Joanne Woodward , and Cukor himself..." (HW159)

Holly never got her nomination. The Academy had already chosen the nominations and Academy rules prevented any changes. Holly also missed the opening night of Trash in New York. She was in jail at the time - for grand larceny while impersonating a French diplomat's wife. A friend of Holly and Silver George's named Shyamoli had been subleasing an apartment from the wealthy wife of a French diplomat. After finding the bank book, passport and credentials of the diplomat's wife at the apartment, George pasted a picture of Holly over the picture of the wife in the passport and Holly practiced the signature. She successfully withdrew $2,000 from the wife's account. But when she returned to withdraw more money she was drunk and suspicions were aroused. She was caught and arrested, with bail set at $1,000.00. (HW10-13)

"I tried to call Andy for help, but the Factory chose to ignore my calls... It seemed that everyone was content to forget me... at least until the release of Trash on October 5, 1970... The film catapulted me into the media's eye, and I became a favourite among the critics. The fact that I was in prison heightened the sensational angle, which the daily Variety took full advantage of by blasting: 'Trash Star Found in Trash Can' for all my neighbours to see... Yet even after the publicity, the praise, and the glory, the Factory still chose to have me imprisoned. When a reporter called to inquire about my arraignment, a Factory spokesperson replied, 'Holly only worked for us eight days. We're sorry she's in jail, but we're not responsible..." (HW17)

Eventually, the artist Larry Rivers bailed Holly out of jail. Holly had previously met Rivers through Jackie Curtis. Even though they were not particularly close friends, Rivers came to Holly's rescue when he learned of her plight. (HW23) When she got out of jail Paul Morrissey cast her in the follow-up to Trash. It was: